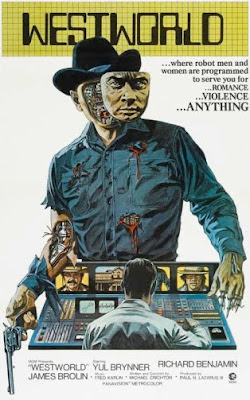 Michael Crichton is probably best known as the author of Jurassic Park, but his earlier vision of a theme park gone wrong was actually a lot more interesting. This was Westworld, which he wrote and directed in 1973.

The Delos Corporation has created the ultimate vacation destination, with three sophisticated theme parks - Medieval World, Roman World and Westworld. These are more than just theme parks, they’re essentially virtual reality parks but with robots instead of computer-generated images.

Each of these worlds is populated by robots that are more or less indistinguishable from real people. The guests at the resort can do anything they wish to the robots. Anything. They can shoot them. They can have sex with them. There are no rules. The technology is so advanced that it is impossible for one of the guests to injure another guest by accident, and it is impossible for the robots to harm the guests. Nothing can go wrong. Famous last words indeed.

Peter Martin (Richard Benjamin) and John Blane (James Brolin) have chosen Westworld for their holiday. They just can’t believe how enjoyable it all is. Within the first half hour Martin has already killed his first gunslinger, the sinister Black Bart (Yul Brynner). After that it’s off to the local whorehouse. This is so much fun that they even forego participating in a bank robbery in order to sample the delights of the young ladies. They might be robots, but they certainly know how to give a man a good time.

Of course you know something is going to go wro

Everything goes fine at first. Of course there are occasional faults in the robots, but they’re well within the anticipated limits. At first. Then the number of faults starts to increase for no apparent reason. The chief technician notes that the occurrence of faults follows a pattern strangely reminiscent of that found in infectious diseases. It’s almost as if th

ere’s a machine virus infecting the robots. And since they’re dealing with machines designed by other machines it’s extremely difficult to deal with such unexpected problems.

The faults had initially been fairly minor, but when a robotic rattlesnake injures a guest, and a robotic medieval wench repulses a guest’s attempted seduction, it’s clear things are getting out of hand. Inevitably the problems escalate until one of the guests gets shot by a robotic gunslinger, but by this time the technicians are losing control of their theme parks.

vie than that. This is a story that is vastly superior to Jurassic Park because, apart from being much more witty and much more clever it’s also much more aware of the nature of the whole entertainment industry. The Delos Corporation has turned sex and violence into holiday entertainment but then that after all is exactly what movies have done. And Westworld is not a recreation of the Old west - it’s a recreation of old western movies. Just as Roman World and Medieval World recreate an imaginary past derived from movies and other media.

The Delos Corporation doesn’t just cater to male fantasies either. While Westworld with its emphasis on sex and violence is mainly popular with male guests Roma

n World and Medieval World cater equally for female guests and female fantasies of romance and sex with a spice of danger and exoticism. The real attraction of the resort is not that it offers limitless violence and sex - it’s the freedom from rules that is the main attraction. Sex and/or violence without guilt.

Crichton does a very creditable job as director, and manages to say everything he needs to say in just 88 minutes.

Richard Benjamin is an actor I’ve never cared for but he really is perfectly cast. I generally like James Brolin even less but he’s effective a

s well. In fact I like the fact that the two protagonists are not overly likeable - it adds an edge to the satire. They’re not exactly innocents. Their idea of the ideal holiday is to spend half their time shooting people and the other half cavorting in the whorehouse.

Yul Brynner manages to play a robot and still give a wonderfully effective performance.

This was a product of the pre-Star Was golden age of movie science fiction, when science fiction movies were still about ideas rather than special effects. Special effects were there to enhance the story, not to replace it. And Westworld is one of the best examples of that approach - an intelligent and very entertaining movie. Highly recommended.

The Region 2 DVD is still in print, it looks great and it’s ridiculously cheap.
Posted by dfordoom at 02:04

Great movie, perceptive review. Have you seen the sequel?

It's such a ridiculous film - but very fun... I like to imagine Brynner as a robot in most other movies I see him in - the role suits him.