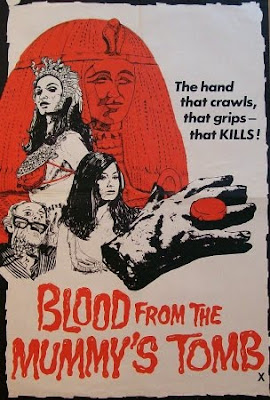 Blood from the Mummy’s Tomb has always been one of my favourite Hammer films and watching it for the third time I find myself liking it as much as ever.

This is in fact the best of Hammer’s mummy films, and with the exception of the original 1932 Universal classic it’s arguably the best mummy film ever made.

It’s based on Bram Stoker’s best and most interesting novel, The Jewel of Seven Stars (yes I really do think it's better than Dracula). Christopher Wicking produced a fine screenplay and Seth Holt directs with considerable flair. Sadly Holt died before the movie was completed and Michael Carreras had to finish the shoot.

A couple of decades before the film opens Professor Julian Fuchs (Andrew Keir) had led a team of British archaeologists on an expedition to find the tomb of a mysterious unnamed Egyptian queen. His interest is more than just archaeological - he has found references to this queen in ancient and medieval manuscripts and he had become convinced that she had discovered the secrets of life and death.

The tomb is found, along with the perfectly preserved body of Queen Tera (for that turns out to be her name). Tera had made bitter enemies of the priesthood of her day. After her death they attempted to destroy all references to her, to expunge all record of her existence. And they feared her so much they cut off her hand, believing that with her body incomplete she could never return to life. Without that preca 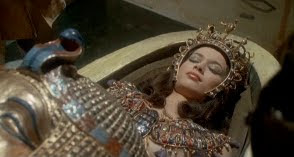 ution they considered this eventuality to be a real possibility.

And the priests had been right to fear that Tera could conquer death, but their precautions were in vain.

At the exact moment that Fuchs opened Tera’s tomb his wife back in England died in childbirth. The child was apparently born dead, but then started to breathe and survived. This child, his only daughter Margaret (Valerie Leon), is now a beautiful young woman. Her birthday is approaching, an event that is infinitely more significant than one might suppose.

All this is revealed in flashbacks occurring during Margaret’s troubled dreams. Margaret dreams of other things as well. She dreams of Queen Tera’s life and death. 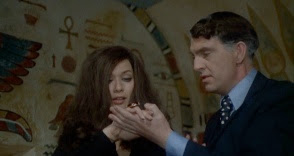 Margaret has never been allowed into the basement of the Fuchs home. When she and her boyfriend Tod Browning (yes, Tod Browning) finally do gain access to the basement they make two alarming discoveries. The first is the apparently lifeless body of Professor Fuchs. The second is the perfectly preserved body of Queen Tera, and she is (as the audience already knows) the exact double of Margaret.

The Professor is not dead but in an extreme coma. He has left instructions for his old friend Doctor Putnum, indicating that he expected this to happen.

The very smooth and very sinister Corbeck (James Villiers), who had been a member of the Fuchs expedition, now appears on th 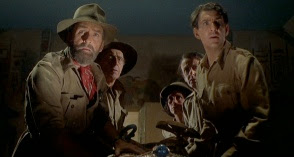 e scene. Corbeck clearly has his own agenda and it’s likely to be a selfish one but Margaret has nowhere else to turn for help - Corbeck at least knows what is going on. The other members of the expedition are dying one by one in unexplained circumstances. Queen Tera may be dead, but she’s been busy. Margaret’s destiny is indissolubly linked to hers, but the link may well prove to be a fatal one.

There’s moderate gory and very brief nudity in this movie but really it’s a very old-fashioned horror movie. Old-fashioned in the best possible way - a horror movie that relies on the building up of an atmosphere of dread and does it in a quite subtle way. Queen Tera is terrifying not because she’s violent but because she threatens to undermine the very order 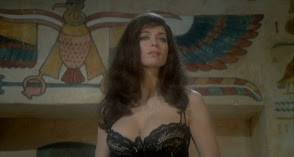 of nature, because she had gained access to powers in her lifetime that no mortal should possess, and these powers did not die with her. And since these powers gave her control over life and death can Tera be said to have ever truly been dead?

This kind of horror has always seemed to me to be far more effective that knife-wielding maniacs. It’s the kind of horror that suggests that there really are fates worse than death.

Tera is also a slightly ambiguous monster. We’re not quite sure what her ultimate agenda might have been, nor can we be certain exactly what her intentions are if she succeeds in reuniting her soul and her body. Perhaps she is 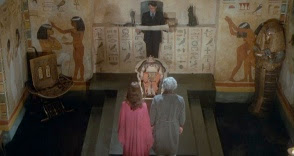 somewhat akin to Hammer’s other great monster, Baron Frankenstein - not precisely evil but horribly dangerous because she recognises no limits to her ambitions and regards any means as justified in order to achieve her ends.

There are no major stars in the cast, but there are some very fine actors delivering very effective performances. Andrew Keir as Professor Fuchs is a strangely ineffectual figure, a man who was once himself prepared to dare anything but who was badly frightened by what took place twenty years ago and who has lost his nerve. James Villiers is delightfully malevolent, a smiling but deadly cobra. Valerie Leon is a perfectly adequate heroine. Aubrey Morris is wonderfully creepy as always as Dr Putnum.

Blood from the Mummy’s Tomb has style, atmosphere and a genuine sense of horrifying forces being unleashed and it all adds up to a superb horror movie.
Posted by dfordoom at 16:09

I loved this film the first go-round - so I bought it and haven't gotten around to watching my copy. I put it in my stack of horror films to watch and "review" prior to Halloween - I hope I enjoy it as much the second time around.