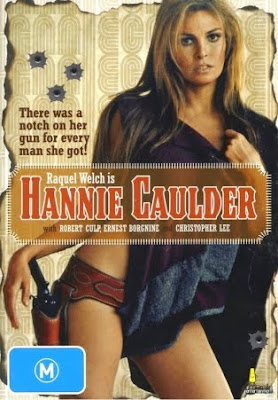 During their very brief existence Tigon British Films were responsible for some of the very best gothic horror films ever made, including Witchfinder-General and Blood on Satan's Claw. In 1971 they decided to try their hands at what was in effect a British spaghetti western. I guess you could call it a bangers-and-mash western. The movie was Hannie Caulder and it’s definitely worth a look.

Spaghetti westerns tended to focus rather heavily on the revenge theme. The twist in Hannie Caulder is that it’s not about a man seeking revenge when his wife and children get murdered, it’s about a woman doing the same thing. Three rather incompetent but very violent bandits, the Clemens brothers, on the run after a bungled bank robbery, kill Hannie Caulder’s husband and rape her. Now Hannie (Raquel Welch) intends to hunt them down and kill them.

The plan starts to take shape in her mind after a chance encounter with bounty hunter Thomas Luther Price (Robert Culp). As bounty hunters go he’s a fairly nice guy. He’s the kind of bounty hunter you could take home to meet Mother. Well, sort of. Hannie tries to persuade him to teach her to be a killer. At first he refuses, mainly because he really doesn’t want to see her get hurt. When he discovers what actually happened to her he changes hi

s mind. He realises it’s something she has to do, and he intends to make sure she’s equipped to do it successfully.

The bulk of the film is taken up by Hannie’s training. Price gets his gunsmith friend Bailey (Christopher Lee) to make custom-made guns for her. Then she’s ready for the showdown.

The plot is one that became more or less standard for 1970s rape revenge movies, such as Bo Arne Vibenius’s stylish 1974 Thriller: A Cruel Picture. Hannie Caulder does have some claims to being the first representative of this genre.

The fight scenes are not especially gory but they’re undeniably effective.

Ernest Borgnine, Jack Elam and Strother Martin play the Clemens brothers, and they play them partly for laughs but they’re still vicious hoodlums and Borgnine in particular is genuinely menacing. Look out for Diana Dors in a minor supporting role.

More problematic is the casting of Robert Culp as Thomas Luther Price. He’s mostly quite good but he has some trouble convincing me he’s really the kind of guy who kills men in cold blood for money. On the other hand he does make a change

from excessively macho western heroes and it is interesting to see a bounty hunter portrayed so sympathetically. He’s really a guy with strong moral principles, and killing bad guys is after all performing a community service. He comes across as being more like a freelance cop than a mere killer.

Of course a movie like this ultimately will stand or fall on the performance of the lead actress. She has to be able to convince us she really could take on hardened bad guys in a gunfight and win and at the same time she has to retain our sympathies. Raquel Welch is more than equal to the challenge. Apart from the superb Kansas City Bomber this is perhaps her finest straight dramatic role.

What makes it interesting is that she has difficulty in becoming a perfect killing machine. She becomes an expert gunfighter certainly but she really doesn’t like killing. She kills because she feels compelled to do so but she has to force herself to overcome her squeamishness. She retains a certain vulnerability but she has the strength of character to carry out her task anyway.This makes her a more convincing heroine than the protagonists in most similar movies. At the risk of sounding incredibly old-fashioned she remains a woman, and when she kills she has to convince herself that it’s absolutely necessary.

This movie’s sexual politics are more complex than you find in the average rape-revenge movie. There’s no simplistic assumption that all men are violent thugs. This type of movie can all too easily descend into a depressing and hopeless nihilism, leaving the viewer feeling that the world is a cesspool and there is little than can be done to change it. Hannie Caulder avoids this pitfall. We’re left not only with some hope for the world, but with some hope for Hannie as well. She has not lost all faith in human beings and she has not lost her own humanity.

While rape revenge movies are often justified as being empowering for women they rarely feel that way. This one actually does.

Umbrella’s Region 4 release is in the correct Cinemascope aspect ratio and looks extremely good.
Posted by dfordoom at 05:01

Just saw this last week. What interested me is the way they treat making Hannie a gunfighter as a technical challenge, the custom design of the lighter gun, her training for wrist strength, etc. I'm not sure whether it's a more feminist approach than the sort of picture where the woman instantly grabs the gun and can shoot. It might seem patronizing to those used to seeing things taken for granted, but the result is still the same. To mix genres further, Hannie's need to train makes this film more like a martial arts film to some extent, but those details help make it worth watching.

Samuel, one of the things I liked about that training to be a gunfighter thing is that she's not just learning the technical side, she's learning to overcome her resistance to killing. The first time she's put to to the test, when the bad guys attack Christopher Lee's place, she's still got that resistance to the idea of actually putting a bullet into a man.

And it never becomes a casual thing for her. Even when she's completed the training killing is still a big deal for her. That's what makes the movie hopeful - she hasn't lost her humanity.

I liked the ending too. She can never go back to her old life. She's crossed a line. She's killed people. But she hasn't crossed the next line - she hasn't learned to enjoy it. If she becomes a professional killer she'll be like Thomas Price, a righteous killer.

It really is much more complex and realistic psychologically than most of the more modern "chicks with guns" movies. And Welch is good enough to make the character believable.

I'd be a bit disappointed by the fact that she isn't actually dressed like she is on the cover... for the whole entire movie forever.

This film is a sentimental favorite of mine. I first saw it as a kid and crushed on Ms. Welch for most of my pre-teen years. And I liked the story too, it was nothing new but I really cared about the good guys.