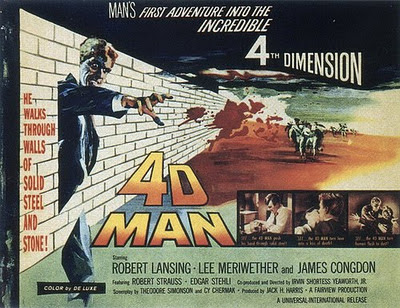 What would happen if a scientist managed to conquer the fourth dimension? Judging by the 1959 sci-fi flick 4D Man the first thing that would happen would be that logic would fly out the window. This is an amazingly silly movie.

But then some of my favourite science fiction movies are amazingly silly. Amazingly silly is something I can live with if it’s combined with fun. 4D Man doesn’t quite make it on this score but it comes close.

Dr Tony Nelson (James Congdon) is a brilliant if erratic scientist who believes he is on the verge of an extraordinary scientific breakthrough. At one stage he managed to get a pencil to penetrate a steel plate by persuading the molecules of the pencil and the steel plate to occupy the same space at the 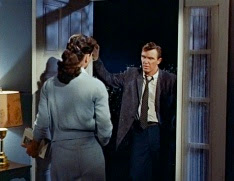 same time. And I use the word persuaded deliberately - he did this by an act of will, aided by a force field.

Unfortunately Tony then managed to burn down his employer’s laboratory and consequently got himself fired. So he set off for another city to join his older brother Scott (Robert Lansing). Dr Scott Nelson is also a brilliant scientist although up till now he’s been more disciplined than his brother.

Scott is working at the laboratories run by Dr Theodore Carson, his current project bring the development of cargonite, a substance so tough that it is for all intents and purposes indestructible. Dr Carson has the unpleasant habit of allowing his staff to do all the work and then taking all the credit himself. Scott hasn’t been too worried by this - he’s dedicated to the pursuit of kno 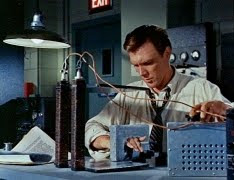 wledge and besides he’s in love with his glamorous assistant Linda Davis (Lee Meriwether) and she’s going to marry him so really he has everything he wants.

Tony’s arrival upsets all his preconceptions. As he’s done in the past Tony proceeds to steal Scott’s remarkably fickle girlfriend, and just as disturbingly Tony also announces that cargonite is not indestructible after all. Tony’s own research proves that nothing is indestructible. By harnessing the powers of the fourth dimension it is possible to concentrate years of willpower into a few seconds thus allowing any object to be penetrated. 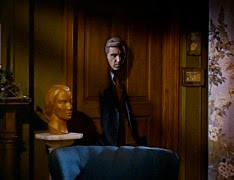 . The shock of discovering Linda’s betrayal pushes him over the edge. He starts to work on Tony’s theories and finds that he doesn’t need the amplifier and force field that Tony has developed - he can pass into the fourth dimension at any time merely by exerting his will. In his increasingly unbalanced mental state this proves to be a dangerous discovery. Scott is out of control.

And there’s a downside to this fourth dimension stuff - it ages you. The only way to keep young is by draining the years from other people and this has the effect of killing them. I warned you that this movie was very silly!

The special effects are reasonable enough - walking through walls and that sort of thing. 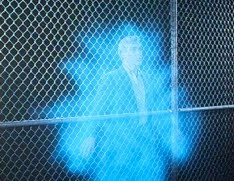 ty change is a difficult sell he does reasonably well in the role. Tony Nelson ends up the hero but really he’s a thoroughly slimy character and James Congdon fails to make him a sympathetic hero. Lee Meriwether as Scott’s faithless girlfriend is somewhat on the dull side. Look out for a very young Patty Duke showing even then a desire to chew any scenery she can get at.

The movie’s biggest problem is the ending which seems very perfunctory.

But this is not a movie to take even remotely seriously - this is 50s American science fiction and no-one should expect it to make sense. Just settle back and enjoy the campy ridiculous fun.

This DVD release is not one of Image Entertainment’s prouder moments. In fact it’s a thoroughly lousy DVD. It’s full frame and picture quality is very poor. So although the movie is fun the DVD is so awful it can’t possibly be recommended.
Posted by dfordoom at 13:53

Saw this about 65 retitled MASTER OF TERROR on a double bill with a 're dubbed Argentine EA Poe effort... for the ad campaign it was called MASTER OF HORROR....TV ads saturated any show kids were watching so when it came to the local flea pit, we were there in droves...