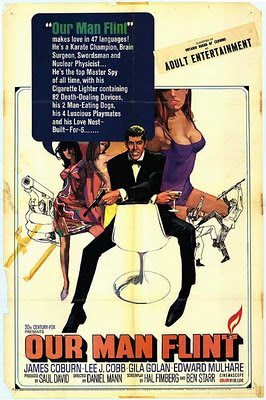 The enormous success of the first James Bond movies launched an avalanche of copies, clones, rip-offs and spoofs. Among the more successful of the American efforts in this regard were the two Derek Flint movies. The first of these was Our Man Flint, released in 1966.

What I find really surprising about this movie is just how hostile most of the online reviews are. Perhaps it just shows how humourless our world has become. But when I find reviewers comparing it unfavourably to the horrendously laboured Austin Powers movies I really start to fear for the future of our civilisation. Our Man Flint has an easy-going charm and an effortless quality that Austin Powers sadly lacks.

The weak point to Our Man Flint is the premise. Mad scientists aiming at world domination by controlling the weather was a cliché even in 1966. The movie does add an amusing and original twist even here though - these are mad scientists who are also into the whole peace and love vibe. They want world domination so everyone can be h

Derek Flint (James Coburn) is a former intelligence agent who has quit the spy game to devote himself to pleasure. He lives a life of luxury in a love nest made for five. Even James Bond never managed four girlfriends at once. Now his former boss, Cramden (Lee J. Cobb), has to try to lure him back for another assignment for ZOWIE (Zonal Organisation for World Intelligence and Espionage). Flint turns him down but changes his mind when someone tries to kill him. Flint is being hunted by a glamorous female agent employed by the mad scientists. Her job is to kill him but she’s too overcome by his manly charms to actually want him dead.

The plot isn’t really the point of the movie. It’s all about the style and the wit, and it has plenty of that. I suspect that a lot of the people who’ve reviewed this movie unfavourably have taken it too seriously. The island headquarters of the bad guys includes a pleasure zone populated by women programmed as love slaves. How anyone could fail to realise that this is not male wish fulfillment, it’s a joke, is beyond me.

Flint is not just a secret agent. He’s a p

olymath, an art connoisseur, a gourmet, an authority on every conceivable subject and of course he’s irresistible to women. The bad guys really don’t have a chance, but then this is a spoof, and it’s the invulnerable infallible hero that it’s spoofing. James Coburn gets the tone just right and avoids the obvious danger of becoming annoying by being so perfect. He’s so obviously not taking any of this seriously, and he doesn’t overplay it.

Lee J. Cobb is an odd choice for what is essentially a lighthearted comic role but he manages reasonably well.

The sets are a major plus. They’re not just the usual secret laboratory/secret criminal headquarters sets - the mad scientists’ island is like a combination of secret laboratory and discotheque. There’s even a mock drive-in theatre in the pleasure zone where couples can experience the ultimate in sensual delights - necking at the drive-in.

While this is strictly a fun romp it’s also an amusing satire of well-meaning but deluded idealists who want to make the world perfect, as lo

ng as it’s their idea of perfection. That’s about as close as this film ever gets to anything even remotely approaching a serious message.

The DVD presentation is adequate. It’s available in a two-movie set along with the second Flint movie, In Like Flint. The transfer is good and it’s in the correct ’scope aspect ratio but there are no extras apart from a trailer.

This movie has submarines, silly gadgets, explosions, a secret headquarters inside a volcano, trained attack eagles and go-go dancing. What’s not to like?
Posted by dfordoom at 12:58

People are claiming this is worse than Austin Powers? While Flint is hardly a great movie, thats a weird position to take. Like saying a pie (with a bawdy limerick written on it) to the face is better than an old 60's playboy cartoon.

Then again, I've always had an odd fondness for this movie since seeing it on TV as a kid one saturday afternoon. Even then I knew it was not meant to be taken seriously.