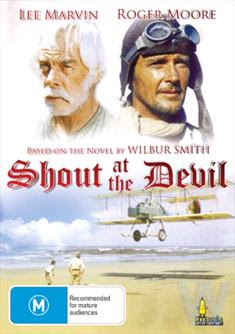 This is not a movie that wants to deconstruct the action movie. There is absolutely no irony to this film. It’s completely unashamed to be exactly what it is, a rollicking tale of adventure.

Flynn O’Flynn (Lee Marvin) is an American big game hunter in East Africa in 1913. He lives in Portuguese East Africa but he regularly crosses the border into German East Africa in search of ivory. He’s not exactly scrupulous about minor details like laws and borders, and his activities are often quite close to outright thieving. He’s also drunk most of the time, but he’s a happy drunk. He’s your typical loveable rogue, the kind of person the modern world has less and less time for, but in 1913 the world was a different place and such a man as Flynn O’Flynn could thrive in that world.

His latest venture is even less legal than usual and to carry it off he needs to ship his ill-gotten ivory downriver and to do this he needs an Englishman so he can maintain the fiction that his vessel is operating under the British flag. That’s where Sebastian Oldsmith (Roger Moore) comes in. Oldsmith is conned into participatin

g but in fact he’s a bit of a rogue himself. Before falling in with O’Flynn he was on his way to Australia, his family having raised the passage money. They wanted him as far away as possible. Oldsmith and O’Flynn make perfect partners.

For Oldsmith there’s another attraction, O’Flynn’s beautiful daughter Rosa. He and Rosa are soon married and Sebastian is happily settling into a life of big game hunting and assorted illegal ventures. But O’Flynn and Oldsmith have a nemesis - Commandant Fleischer, the German military governor in the neighbouring portion of German East Africa. O’Flynn and Fleischer have clashed many times in the past and they hate each other with a venom t

On one of their jaunts into German territory O’Flynn and Oldsmith have their first encounter with the German battlecruiser Blücher when it rams and sinks their dhow.

The declaration of war in 1914 gives Fleischer the excuse he has always wanted to cross the frontier and settle accounts with the troublesome O’Flynn. The tragic results of this expedition will seal Fleischer’s fate as O’Flynn and Oldsmith vow to hunt him down and kill him. As it happens their quest for revenge dovetails quite nicely with the Royal Navy’s plans. They believe the Blücher is taking refuge in an East

African river and they want it sunk but they have no warships in the vicinity powerful enough to take on a battlecruiser, so O’Flynn and Oldsmith are recruited to do the job by sabotage, a task they can combine with revenge since Fleischer is believed to be on board.

The first two-thirds of this movie is pure silly fun with a nice mix of action and humour. It then takes a rather darker turn as it moves towards its apocalyptic climax but the excitement doesn’t let up.

The miniatures work is very impressive, as you’d expect when the man responsible for it is Derek Meddings, who started out on Gerry Anderson’s 1960s puppet adve

nture series and moved on from there to the Roger Moore James Bond movies.

Lee Marvin and Roger Moore make a great team. They might be rogues but they’re still the good guys and we want them to win. Rene Kolldehoff is delightfully over-the-top as Fleischer. Fleischer is not exactly a subtle villain, but this is not a movie that is overly worried about subtlety.

This is one of the most politically incorrect movies you’re ever going to see, a movie that could not possibly get made today. So that’s another point in its favour.

Umbrella Entertainment’s Region 4 DVD release is an uncut widescreen release and while the picture quality isn’t sensational it’s quite reasonable. It appears that some of the other DVD releases of this movie have been savagely cut and are very poor quality so the Umbrella disc is probably the one to go for. I suspect that online reviewers who complain about this movie’s supposed incoherence have only seen the cut version because the full version certainly cannot be accused of such a fault. It might be far-fetched but it all makes perfect sense.

This is a movie to enjoy for what it is. On its own terms it succeeds admirably and it’s thoroughly enjoyable.
Posted by dfordoom at 12:00

Do you know what's cut from the other releases?

Do you know what's cut from the other releases?

No, I don't, but I believe some have been cut by half an hour or more. I assume they're prints that were cut for television broadcasting.