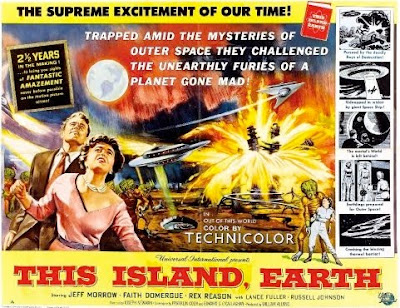 Universal’s This Island Earth was one of the more ambitious science fiction movies of the 50s. It’s been overshadowed by films such as Invasion of the Body Snatchers, The Day the Earth Stood Still and Forbidden Planet but in its own way it’s just as interesting.

It’s also typical of American science fiction movies of that era in its ambiguous treatment of the theme of alien invasion. It’s one of several such movies that suggested that taken invaders might not necessarily be completely hostile, or at the very least that they might have some justification for their actions.

The first half of the movie is especially clever. An electronics engineer, Dr Cal Meacham, at a major laboratory orders a part. The pa 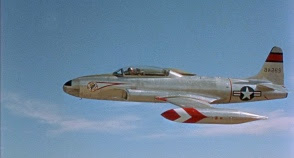 rt that arrives is far more advanced than anything he’s ever seen, and the company from which he ordered it denies any knowledge of it. He orders more parts and receives a catalogue ad instructions for constructing an apparatus. He has no idea what this apparatus will do but being an inquisitive kind of chappie he builds it anyway.

It turns out to be a communications device (which he is told is called an interociter) and a guy with a curiously pronounced forehead contacts him and tells him to be at a remote airstrip at a particular time where a plane will take him somewhere where he’ll discover all sorts of interesting things. Now the average person would be pretty suspicious of all this but like he said he 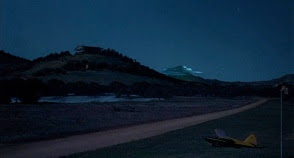 ’s an inquisitive fellow and so he goes. He’s taken to a laboratory where a group of mysterious people have assembled a team of top-flight atomic scientists.

One of the scientists is, naturally, a beautiful woman. Dr Ruth Adams (Faith Domergue) in fact is an old fame of Cal Meacham’s but strangely she claims never to have set eyes on him before. These scientists do seem to be behaving a bit oddly and several of them have started to suspect that something very strange is behind all this. And they’re right about that. The guys with the big foreheads are of course aliens, from the planet Metaluna.

At the halfway point the movie not 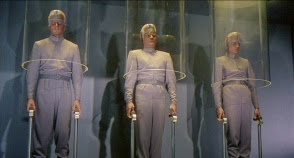 only switches settings but also switches tone as the aliens are recalled to their own planet. Cal and Ruth are trying to make their escape in a light plane but it’s snared by a tractor beam from the aliens’ flying saucer and they find themselves on the way to Metaluna. And they discover that the aliens aren’t evil, they’re merely desperate. They are engaged in a war with the planet Zagon and they’re losing. The laboratory on earth was part of a last-ditch attempt to find a way to save their civilisation. 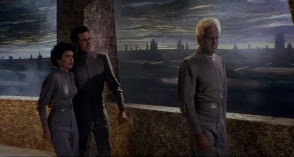 e it an epic feel. Mostly they succeeded although the special effects occasionally let them down. The alien planet is rendered mostly with matte paintings and although they look obviously artificial the imaginative nature of the paintings does give an eerie other-worldly feel. Personally I like the use of matte paintings even when they’re obvious. And there are some pretty impressive sets.

There are also some very cool concepts, such as the use of comets and meteors as weapon of mass destruction. That’s the great strength of this movie - the aliens use technologies that seem genuinely alien, rather than death ra 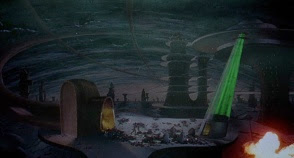 The acting is quite passable with most of the players appearing to do their best to take proceedings as seriously as possible.

With an intelligent thoughtful script and plenty of visual imagination this movie represents 1950s Hollywood sci-fi at its best.

Universal’s UK DVD release is coded for Regions 2, 4 and 5 and although there’s a lack of extras it’s a very impressive widescreen transfer and I recommend it unhesitatingly.
Posted by dfordoom at 20:01