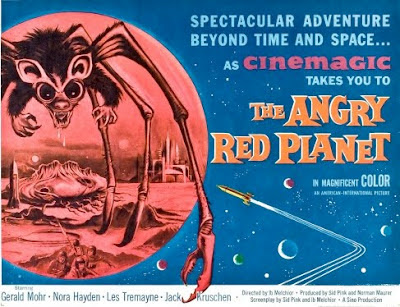 Even by the standards of cheesy 50s sci-fi movies The Angry Red Planet is very very cheesy indeed. This is cheese with an extra helping of cheese covered in cheese sauce with sprinkles of more cheese. But it’s fun in its own way.

Contact is lost with the first Earth space mission to Mars soon after it arrives on the red planet. Then two months later the spaceship re-enters Earth orbit. There’s still no contact with the crew so the craft is landed by remote control. The landing is just a scene of a rocket launch played in reverse! Great stuff.

Only two of the four crew members have returned to Earth. The spaceship commander, Colonel Thomas O’Bannion, is suffering from an unknown infection. No-one seems the least bit concerned that he might spread this infection to everyone on Earth. The other survivor is Dr Iris Ryan, the only female member of the crew.

Since all the spacecraft’s 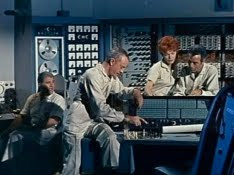 records have been erased Dr Ryan is the only possible source of information that might shed light on this mystery. She tells the story of the mission in flashback.

At first the only life they found on Mars was plant life. That seemed harmless enough, but looks can be deceptive. The Martian flora includes gigantic carnivorous plants that feed on passing astronauts. And soon they find even stranger life forms, like the huge spider-rat type thing that is 40 feet high and distinctly unfriendly. Eventually they discover a city. There is intelligent life here, and the intelligent life delivers an ominous warning to our space travellers although we don’t find out the contents of the warning until the end of the movie.

And worst of all, there’s the amoeba thing. This is no ordinary amoeba. It’s the Mo 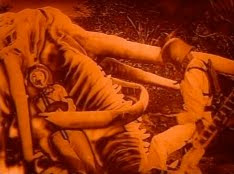 ther Of All Amoeba. It’s much bigger than the spaceship and like the carnivorous plant it eats astronauts. It also shows signs of possibly eating spaceships. And how can you kill an amoeba? There is only one thing that can do that, and can they discover it in time? Since we already know the spaceship returns to Earth the answer is obviously yes.

But what have they brought back with them?

The story is pretty silly and the special effects are crude but it has to be admitted that the giant spider-rat type thing is a pretty cool concept. The scenes on the Martian surface are filmed in the revolutionary new Cine-Magic process! Which turns out to be just a solarised red tint, the main advantage of which is to disguise the cheapness of the special effects and the crudity of the matte paintings. Except that it d 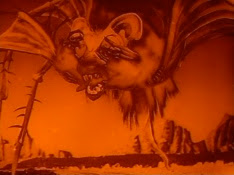 Despite its obvious cheapness this AIP production was surprisingly filmed in colour.

The acting is terrible and the dialogue is excruciating. Colonel O’Bannion is remarkably sleazy. It’s clear that the success of the mission is of secondary importance compared to the far more vital project of having his wicked way with Dr Ryan. But she loves him anyway. Th

ere is of course one character whose job is to act as comic relief. I’m sure that like me you will be praying for him to be eaten by the next carnivorous plant they encounter.

The warning from the Martians turns out to to be the usual predictable stuff about the wickedness and violence of human beings.

I caught this one on cable TV but it is available on DVD in MGM’s Midnite Movies range. The print screened on cable was reasonable if not outstanding.

So is it worth seeing? If you’re a fan of cheerfully goofy 1950s sci-fi movies the answer is yes, it’s mindless fun. You’ll need lots of popcorn. And probably lots of alcohol. Especially the alcohol.
Posted by dfordoom at 17:14

Cheesey but notable I think for it being the most thinly veiled piece of anti-communist propaganda in the whole of the 50's sci-fi cycle. I think only ROCKY IV matches it!

Oh, please, I love cheesy sf, and this is the cheesiest. But don't say its poorly acted; it's not. Poorly written, certainly, but the cast does its best with the script.