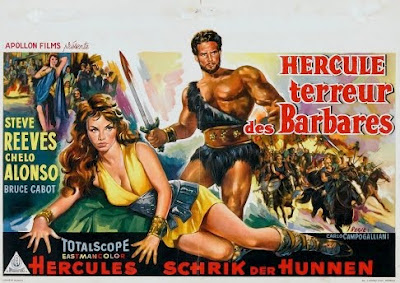 As you would expect fron the peplum genre Goliath and the Barbarians (Il terrore dei barbari) has nothing whatever to do with Goliath. But it’s still fun.

This one is set in the Dark Ages rather than in the world of antiquity. In the 6th century AD Belisarius and Narses reconquered Italy for the Eastern Roman Empire but it was a short-lived triumph. A new barbarian foe, the Lombards, swept into Italy in the latter part of that century. This forms the background to this movie.

The Lombards are the bad guys, but they make a formidable enemy when they kill the father of Emiliano (Steve Reeves). Emiliano vows to have his revenge, and pretty soon he is slaug

htering lots of Lombards. Since he’s big and he has the strength of ten men he earns the nickname of The Goliath, thus justifying the English-language release title.

The baddest of the bad guys is Igor (Livio Lorenzon). He’s one of the generals of the Lombard king, Alboino. He’s not just nasty, he also covets the beautiful daughter of another of Alboino’s generals. The very exotic beauty Landa (Chelo Alonso) is the daughter of Delfo (Andrea Checchi), but she’s not interested in the brutish Igor.

Landa soon finds a man she does fancy. He claims to be a simple w

oodcutter who rescues her when her horse throws her. He’s big and he’s handsome and he’s a nice guy and she falls for him in a major way. He’s pretty keen on her as well. What she doesn’t know is that her hunky woodcutter is actually The Goliath! And thus the enemy of her father. And dear old Dad wants her to be nice to Igor because he doesn’t have many allies at the barbarian court and Igor would be a very powerful ally.

Meanwhile Emiliano continues to cause mayhem in the ranks of the Lombard armies. Delfo actually captures him but releases him after

he proves his strength (which seems like a slightly odd command decison). Delfo has other problems - Igor is plotting against him.

Goliath and the Barbarians lacks the supernatural elements and the monsters that appear in so many of my favourite movies in this genre. It’s a fairly restrained offering and while I generally prefer the more outlandish peplum offerings it’s still fine entertainment.

Steve Reeves plays the role the way he always played these roles, which is fine by me. Chelo Alonso is delightfully and outrageously sexy as Landa and gives a spirited performance. Livio Lorenzon is a marvellous villain and most of the supporting actors are more than adequate.

This one is part of a double-header DVD release from a small outfit called Wild East, paired with Goliath and the Vampires. It appears to be a slightly cut version of Goliath and the Barbarians but it’s a very nice letterboxed widescreen print and vastly superior to the usual run of pan-and-scanned peplum releases.

It’s too low-key and too sensible to be a really great peplum but it’s still worth having.
Posted by dfordoom at 00:59