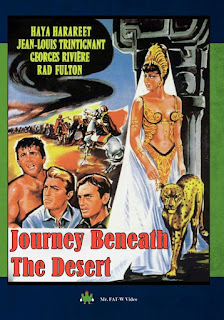 I’m slightly obsessed with Pierre Benoît’s 1919 novel Queen of Atlantis (L’Atlantide). I’ve now seen three screen adaptations of his novel, the most recent being Journey Beneath the Desert (L'Atlantide).

This 1961 Franco-Italian co-production clearly had a somewhat troubled production history given that the IMDb lists no less than three directing credits - Giuseppe Masini, Frank Borzage and Edgar G. Ulmer. The general assumption seems to be that the movie is largely the work of Ulmer.

It’s by far the least faithful to the novel of the three film versions that I’ve seen but it does have some interesting features. Perhaps surprisingly the most faithful and the best of the film versions I’ve seen remains the wonderfully entertaining 1949 Hollywood B-picture Siren of Atlantis, and perhaps even more surprisingly the actress who comes closest to nailing the character of the mysterious Queen Antinea is Maria Montez in that same 1949 version.

But back to Journey Beneath the Desert. The novel tells of two Foreign Legionnaires who discover a lost civilisation that proves to be the fabled city of Atlantis. This part of the story is retained in the movie. The movie tells us that Atlantis was not buried beneath the waves - it was left stranded in the middle of the Sahara Desert when the oceans retreated after a catastrophic earthquake. Now three men (John, Robert and Pierre) undertaking an aerial survey of the desert shortly before a nuclear test discover the city hidden in a mountain range in the desert. They also discover that if Atlantis is difficult to find, it’s even more difficult to leave. Many people have stumbled upon the city but it is said that none has ever succeeded in leaving. 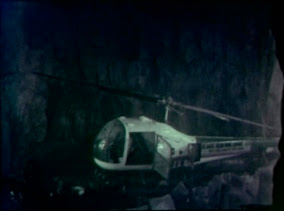 The city is ruled by the beautiful Queen Antinea. Antinea was the last ruler of Atlantis but our travelers are told that her spirit is reincarnated in every girl who subsequently becomes queen. Atlantis has always been ruled by Queen Antinea, and always will be.

Our three heroes are now more or less prisoners. They’re not too happy about that, especially with an atom bomb test about to take place which threatens the final destruction of the city. But life in Atlantis does have one compensation - Queen Antinea. Many men have loved Antinea and it’s not surprising that two of our heroes fall for her considerable charms.

There is some reason to doubt the story they have been told about the city. It’s odd that an ancient city is guarded by soldiers armed with submachine guns, and it’s even odder that the man who appears to be Queen Antinea’s grand vizier, Tamal, knows all about the upcoming atomic bomb test - he’s been following the news on his radio. 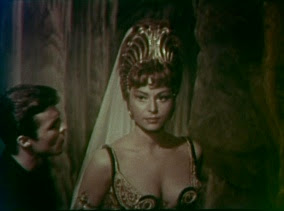 The mountains in which Atlantis is located are rich in a rare and valuable mineral. One of our three heroes happens to be a mineralogist and he immediately recognises the immense value of these deposits. Tamal obviously knows their value as well - he has an army of slaves working the mines extracting the ore.

One of our heroes decides that the best way to make his escape is by leading a revolt of the slaves but what can slaves do against men with submachine guns? And escaping would mean not seeing Antinea again, and at least one of our heroes doesn’t like that idea at all. Antinea’s lovers are often discarded but they never leave her voluntarily.

For what must have been a fairly low budget movie it looks pretty impressive although the full visual impact of the movie is somewhat lost in the very poor prints that are available. The acting reaches no great heights. Jean-Louis Trintignant is adequate but was clearly more interested in his pay cheque than in the movie. Haya Harareet certainly looks the part as Antinea and her rather revealing costumes show off her charms to considerable effect.

The changes made to the original story are sometimes interesting and were clearly an effort to make the movie resonate more with 1961 audiences but they do have the effect of losing much of the exotic poetry and mystery of Benoît’s novel.

While the pacing is on the slow side this is a reasonably entertaining movie and not without interest. 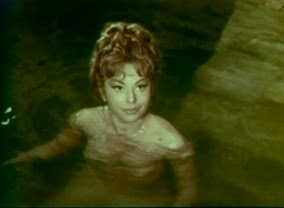 Sinister Cinema’s DVD-R version seems to be the only edition of this movie available anywhere and unfortunately it’s taken from a truly awful print. It’s fullframe which is bad enough (the movie was shot in a 2.20:1 aspect ratio) and the colours are very badly faded. In fact at times they’re so faded it looks like a black-and-white movie. This is also a great pity since the movie was shot in Technicolor.

If a good widescreen print of this movie ever surfaces on DVD it’s possible that the movie’s reputation might have to be considerably revised upwards.

Worth a look if you don’t set your hopes too high.
Curiously enough the best adaptation of Benoit's novel is the 1949 B-movie Siren of Atlantis. G. W. Pabst's 1932 Mistress of Atlantis is interesting but has a few problems.
Posted by dfordoom at 10:57