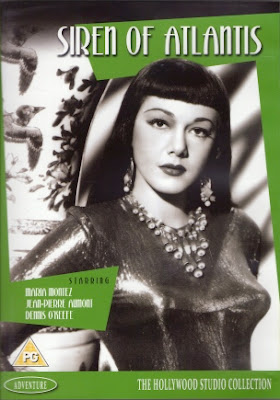 Siren of Atlantis was based on Pierre Benoît's 1919 novel L'Atlantide, which was translated into English as The Queen of Atlantis. It’s one of countless film versions of this classic adventure tale.

With Maria Montez as the star you might expect this one to put the emphasis on camp, and you’d be partly correct.

A French archaeologist has come up with a theory about the lost city of Atlantis. He believes it’s to be found in the middle of the Sahara Desert. His idea is that the Sahara was once the bed of a deep ocean.

His expedition sets off from a Foreign Legion fort and is not heard from again. Captain Jean Morhange (Dennis O'Keefe) and Lieutenant André St. Avit (Jean-Pierre Aumont) are despatched with a rescue party to find the missing scientist.

They find Atlantis. They were 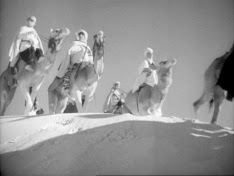 expecting ruins, but Atlantis is a living city. It’s a kind of hybrid civilisation, ruled over by the Atlantean queen Antinea but peopled mostly by Tuaregs. An even bigger surprise is that there are quite a few modern Europeans in the city, all survivors of various ill-fated expeditions.

Those who happen to be male and good-looking have the chance of being chosen by the queen as her current toyboy. That sounds like a good deal, given that the queen is very beautiful and apparently very passionate. She is however also capricious. She tires quickly of her paramours. Their fate thereafter is not a happy one. It’s not that she has them killed, it’s just that a 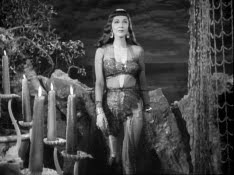 fter enjoying the queen’s favours for a while and then finding themselves discarded they are left as mere wrecks and invariably end up as self-pitying alcoholics.

Lieutenant André St. Avit is therefore not sure how pleased he should be when he becomes the queen’s latest plaything. Any doubts are soon cast aside however - André becomes hopelessly obsessed by the beautiful but easily bored queen. 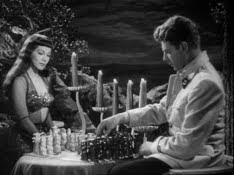 t who was never chosen to share the queen’s bed. He is as a result somewhat bitter and is of a naturally troublesome disposition, He amuses himself by setting St. Avit and Morhange against each other, as he has set many other men against each other in the past. He convinces St. Avit that Morhange has usurped his position in the queen’s favours. This will have disastrous consequences. Equally disastrous will be Morhange’s attempts to escape. This is strictly forbidden, in order to keep the existence of Altantis a secret.

There are some clever plot twists to come which I cannot speak about without giving away spoilers. It’s an interesting and multi-la 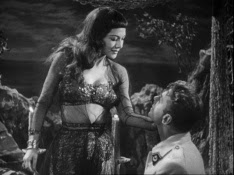 yered story and the film does a fairly good job with it.

The acting is actually reasonably good. Dennis O’Keefe is noble and manly as Morhange, while Jean-Pierre Aumont is suitably vulnerable to Antinea’s womanly charms. Henry Daniell makes a splendidly oily villain. Maria Montez might not hve been the worlds greatest actress but this role is well within her acting range and she acquits herself quite creditably, plus she has the exotic glamour and the dangerous sexuality that is required.

It was not a big-budget 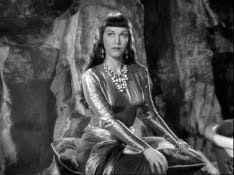 picture but it looks reasonably impressive.

There’s certainly enough here to please lovers of camp but there are also unexpected dark overtones to this movie. It seems to have been an attempt to do a fairly serious adaptation of the story and it succeeds to a greater extent than you might expect. It’s a psychological drama and a tragedy rather than a mere campfest. This is a movie that deserves more respect than it generally receives - all in all a pleasant surprise.

Odeon’s all-region PAL DVD release is light on extras but it looks extremely good and it’s pleasingly inexpensive. I recommend this one.
Posted by dfordoom at 00:14

Haven't seen this version but did see G. W. Pabst's from 1932, which is "Mistress of Atlantis" in its English version and stars Brigitte Helm of Metropolis fame. An odd film with a good amount of location work and one of the most stunning jump cuts of the era to introduce the flashback of Antinea's origin. I'll have to check Siren out sometime.

Samuel, I've been wanting to see the Pabst version for quite a while. So I've just ordered a copy!