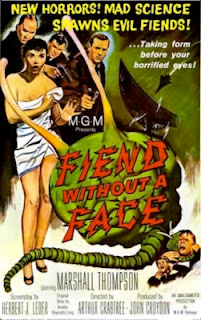 I know that Fiend without a Face has the reputation of being something of a horror classic, but I’m afraid it’s a classic that left me sadly underwhelmed.

It is interesting in that it’s a 1958 British movie that seems like a 1958 American sci-fi/horror movie. While Hammer did make a couple of superb science fiction movies around this time (the Quatermass movies) this one has very much of an American monster movie feel to it. It’s set at an American air force base in a French-speaking part of Canada, which adds to the unsettling transatlantic feel that doesn’t seem quite right. The interactions between the air force people and the villagers suddenly makes one feel like one has wandered into a 1950s British Ealing comedy.

The American air force base is being used for experiments in atomic-powered radar. This was the 50s, so atomic power could be used for anything! The atomic power is beamed from ground stations to an aircraft in flight. Yes, I thought that bit was pretty silly too, but this movie is going to get a lot sillier than that. Strange events are occurring in the vicinity of the base. People are dying in inexplicable ways. The locals, being simple country people, think the atomic reactor at the air base is responsible even though the air base commander assures them that nuclear power is completely safe. Eventually permission is obtained to cary out autopsies on the dead, and it is discovered that their brains and spinal columns have been sucked out through two small puncture marks at the base of the skull! This merely confirms the suspicion of the villagers that atomic radiation is the culprit.

Major Cummings (Marshall Thompson) has the task of investigating the deaths and calming the local people. He’s inclined to think that the mysterious Professor Walgate may be connected. He is after all a mad scientist, working in the area of psychic phenomena and thought control. You know he’s a proper movie mad scientist because he has a beautiful female assistant (standard equipment for mad scientists in those days). 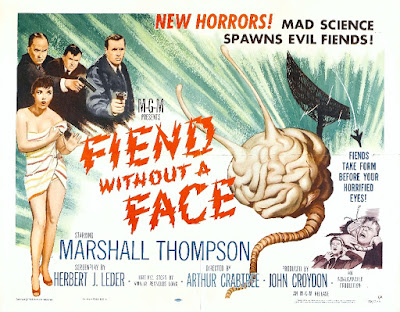 And of course Major Cummings and the beautiful female assistant start to fall in love, especially when he lets himself into her house to find her wearing nothing but a towel. This is the movie’s one sexy moment and they played it up for all it was worth on the posters!

Naturally if the villagers hadn’t been ignorant superstitious bumpkins they’d have realised at once that they were dealing with an invisible brain-eating monster. Oddly enough even the air force chappies take a while to figure that one out. As long as the monsters stay invisible the movie has a chance, but once a way is found to make them visible all is lost. If you have very silly looking monsters and very bad special effects, show your monsters as little as possible. Sadly the makers of this film ignored this golden rule. The stop-motion effects undoubtedly required considerable effort, but they look ridiculous. I generally have a very high tolerance for crude social effects, but this movie exceeded my tolerance by a considerable margin. 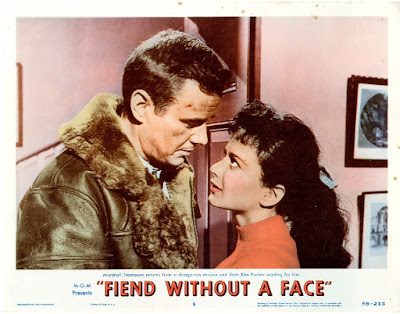 The movie has lots of other problems as well. For one thing, although there’s a germ of a good idea in there the plot is full of gaping holes. The acting is very unexciting, and the direction and the cinematography are lacklustre. So the elements that could compensate for the plot deficiencies and the general silliness of the premise are lacking. It’s not the plot or the monsters that sink this film, but simply the fact that it’s dull and lacks suspense. It’s an interesting historical oddity and if you really really love 50s sci-fi monster movies you might enjoy this movie. It’s definitely not my idea of an entertaining movie, although the 1950s jet fighters look rather spiffy and will appeal to aircraft geeks.

Fiend Without a Face has had numerous DVD releases including a typically expensive one from Criterion. I personally wouldn’t shell out big bucks for this one. Maybe worth a rental.
Posted by dfordoom at 18:07 No comments: 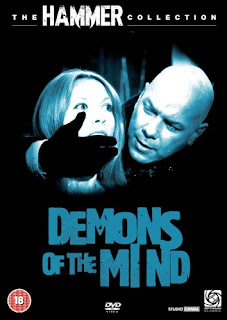 Demons of the Mind is in many ways typical of what Hammer Films were doing in the early 70s - trying to stick to what they knew best and had had the most success with while also trying to vary a formula in real danger of becoming stale. So it’s a gothic horror movie, but it’s psychological rather than supernatural horror.

The setting is the familiar Hammer generic middle Europe, presumably towards the end of the 19th century. There have been murders and disappearances, and murmurings among the local peasantry about demons. There are in fact demons that are responsible for these horrors, but they are demons of the mind. There is a curse, but it’s the curse of insanity rather than the diabolical kind. It’s an inherited disorder of the mind, but not in the usual sense. It’s the type of madness a parent passes on to a child, but not through the blood (or through the genes as we’d see it today).

The Baron Zorn has two children, twins, a girl and a boy, both now on the cusp of adulthood. The Baron and his sister along with Klaus, a faithful family retainer bearing at least a passing resemblance to a part-time hoodlum, are keeping the twins Elizabeth and Emil under lock and key and under heavy sedation. They have escaped more than once, and the baron has cause to believe that their minds are tainted with the Zorn family’s predilections for murder and blood. There is also reason to suspect an excessively close attachment between brother and sister, with definite sexual undertones. The last time Elizabeth almost got away she stayed in a hut in the woods with a nice young man with whom she became very very friendly indeed. She was retaken however, although the young man will reappear in the story. 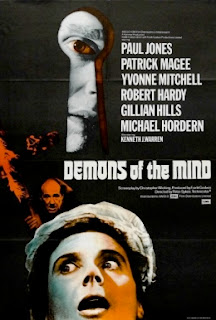 In desperation the baron has called upon the services of the modern equivalent of the witch-hunter, the psychiatrist Falkenberg (Patrick Magee). But psychiatry at this point in history is little more than hocus pocus and theatrics, and even by the standards of 19th century medicine Falkenberg has a reputation as a charlatan. But where else is there to turn to? To add the necessary degree of complication to the plot a crazed wandering preacher (Michael Hordern over-acting outrageously) arrives, warning of devilry.

For a late Hammer production this film looks handsome and classy. The atmosphere combines dark secrets, incest, insanity, bloodlust, sexual anxiety and aristocratic decay and does it effectively and with style. Director Peter Sykes provides a competent hand at the helm.

And the cast is potentially extremely strong. Patrick Magee plays Falkenberg with his usual mix of frenzied and maniacal excess. The main task confronting Gillian Hills in the role of Elizabeth was to be sweet, innocent, sinister and completely loopy all at the same time, as she succeeds admirably. She has little else to do, but little else is necessary. Shane Briant as her brother Emil displays much the same characteristic but with added creepiness. His performance is less successful, but it’s perfectly adequate. Michael Hordern is great fun. Robert Hardy as the baron has a more complex and ambiguous part to play and he doesn’t quite nail it, but it’s a valiant attempt.

The script has weaknesses if you’re inclined to probe deeply enough, but if a horror movie has energy and style and gets the mood and feel right a few problems with the script don’t really matter and this movie has the requisite qualities. Being the early 70s, there’s some gore and some nudity. The film is both intriguing in the ideas it plays with and also very entertaining and there isn’t a great deal more than one can ask. A surprisingly interesting but oddly neglected movie which I thoroughly recommend.

Demons of the Mind is readily available on DVD.
Posted by dfordoom at 21:11 No comments: 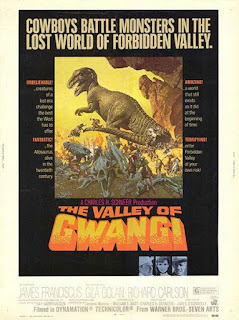 The Valley of Gwangi is one of those lost worlds where dinosaurs still roam movies. While these movies tend to follow a fairly standard formula, this one is a little unusual in being a cowboys and dinosaurs movie. It also has stop-motion animation effects by Ray Harryhausen, which is sufficient reason in itself to make it worth seeing.

The movie, made in 1969, is set somewhere around 1900. Tuck Kirby is a somewhat shady cowboy/conman/impresario who turns up in the town where his old girlfriend, the beautiful T. J. Breckenridge, is the star attraction in a Wild West show. Her act is to jump from a high platform into a pool of water surrounded by fire while on  horseback. Not the easiest way to make a living one would have thought. The show is run by her father, and it isn’t doing too well, but T. J. has come up with a new attraction which should turn the show into a veritable goldmine. One of the cowboys has found a living eohippus, the so-called dawn horse, the ancestor of the modern horse. It’s about the size of a large rabbit. She’s going to stage an act in which the miniature horse rides on the back of a full-size horse.

There’s also a paleontologist working in the area, and when he finds out about the living eohippus the stage is set for a struggle between the scientist wanting to exploit the discovery in the interests of human knowledge and on the other hand T. J. and Tuck wanting to exploit it to make lots of money. Since T. J. doesn’t trust Tuck one little bit there are really three parties all competing for ownership of the little horse. It doesn’t take long for them to figure out that where there one eohippus there must be more, so they set out for the forbidden Valley of Gwangi, despite the dire warnings of catastrophe by the local gypsy wise woman. The valley contains more than just miniature horses - it also boasts living dinosaurs including a Tyrannosaurus rex, which of course would make an even better attraction in the arena than a bunny-sized horse. They set out to trap themselves a dinosaur (in one of the most stunning stop-motion sequences Harryhausen ever staged). 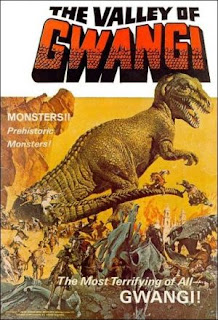 Of course anyone who’d watched a few science fiction movies could have told them that trying to use a full-sized Tyrannosaurus rex in a circus show was an idea bound to lead to all sorts of destructive mayhem but they didn’t have science fiction movies in 1900 to warn them of such dangers. And naturally the expected mayhem does in fact occur.

The acting is reasonably proficient, with James Franciscus charming and thoroughly untrustworthy but terribly brave as Tick and Gila Golan doing a competent job as T. J. Laurence Naismith contributes a fairly standard but still entertaining performance as the dotty paleontologist. There’s a romantic sub-plot between T. J.  and Tuck, there are problems caused by the superstitious fears of the locals, and overall the far-fetched plot provides a good deal of fun and excitement.

Harryhausen’s creature effects are the real stars, and as always he delivers the goods.

The movie is available on DVD just about everywhere. The region 4 DVD includes a very short and completely worthless documentary which consists of very little besides modern special effects “wizards” gushing about what a genius Harryhausen was. He certainly was a genius, but this brief doco contributes remarkably little in the way of actual information about the man and his methods.

The movie itself though is a very enjoyable romp which never makes the mistake of taking itself too seriously. And by sticking to a running time of just over 90 minutes it also (unlike so many modern movies of this type) avoids the danger of wearing out its welcome. Highly recommended.
Posted by dfordoom at 19:18 No comments: