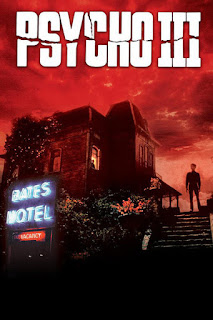 By 1986 Anthony Perkins was facing up to the fact that if he wanted to get another starring role in a movie, and if he wanted a chance to direct (which he did), his only option was going to be another Psycho sequel. Which is why we have Psycho III.

There are two things that need to be said upfront about this movie. If you haven’t seen Psycho II you definitely won’t have the remotest idea what’s going on. And Psycho III contains major spoilers for Psycho II. So you absolutely must watch Psycho II first.

Which also means I’m going to have to be a bit vague at times about the plot outlines of the third film since I don’t want to be responsible for spoiling the second film. There are many references to the events of Psycho II which I’m not going to discuss and since they’re they’re the least satisfactory feature of the movie perhaps it’s just as well to ignore them.

The movie opens with a prologue which is an homage to a Hitchcock film, but it’s an homage to Vertigo rather than Psycho. It tells us some very disturbing things about a nun named Maureen Coyle (Diana Scarwid) and most of all it tells us why she isn’t a nun any more.

Norman Bates is back once again running the Bates Motel. He has been declared cured. Surprisingly enough the small local community has accepted him. Norman may have killed a whole bunch of people but apart from that he’s a nice enough guy and people feel sorry for him. However horrible his crimes may have been he has paid a very high price for them and he has shown considerable courage in attempting to take up his life again in the same community. 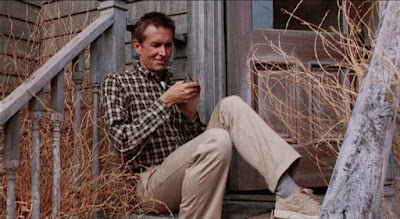 Now some disruptive elements have entered his life. Three people have arrived in the town. One is journalist Tracy Venable (Roberta Maxwell). One is a would-be rockstar named Duane Duke (Jeff Fahey). Duke gets a job as Norman’s assistant at the motel. The third and most unsettling is Maureen Coyle. What makes Maureen really unsettling to Norman is that she has her initials on her suitcase, M.C., which are of course Marion Crane’s initials. This not unnaturally upsets Norman a good deal.

You won’t be in the least surprised to hear that the Bates Motel is once again the scene of a series of horrific murders. Norman is of course suspected but the local sheriff is convinced that he is not the killer. The killings continue, while a strange emotional entanglement develops between Norman and Maureen.

The ending is disappointing, being just a bit too obvious. 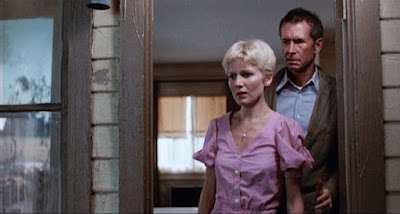 Any Psycho sequel is going to have the problem that we already know about Norman and his mother. The subject of his mother can’t be ignored but it’s not easy to give it any real shock value. Psycho III solves this problem by putting much of the focus on Maureen Coyle. Maureen clearly has lots of issues. She is clearly, in her own way, just as crazy and confused and alienated from real life as Norman. And being a nun suddenly thrust into the everyday world she is obviously a woman with a less than relaxed attitude towards sex. In fact she’s as uncomfortable with that area of life as Norman.

She is also, like Norman, a person who seems to find impossible to escape her past. 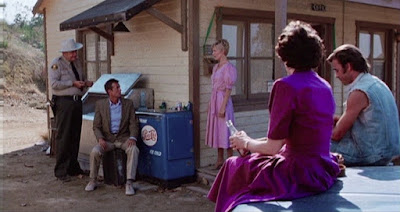 There’s little point in saying that Anthony Perkins makes a good crazy person. We all know that. He does perhaps push things a bit too far at times. Roberta Maxwell plays the journalist Tracy as a woman with the morals of a rattlesnake and all the charm of an infected tooth. In other words, a typical journalist. The performance that really matters is Diana Scarwid’s. She has to make Maureen crazy and disconnected and generally weird and at the same time fascinating. She manages to do this fairly well. Jeff Fahey goes wildly over-the-top as Duane and adds appreciably to the movie’s high weirdness quotient. The Bates Motel is a real crazy person magnet in this film.

Of course this being the 80s Psycho III has a lot more overt gore than Hitchcock’s 1960 movie, and it has some gratuitous sex and nudity. These things were dictated by the commercial realities of the era and there’s nothing Perkins could have done about it. It’s also, naturally, widescreen and in colour. Again this was an unavoidable commercial reality.

In fact almost everything that is wrong with this film can be laid at the door of the studio. Perkins and screenwriter Charles Edward Pogue wanted to make a movie more concerned with the tragic emotional consequences of the events but the studio wanted a slasher movie. Ironically the movie was a commercial failure, which tends to happen when studio execs get to call the shots. 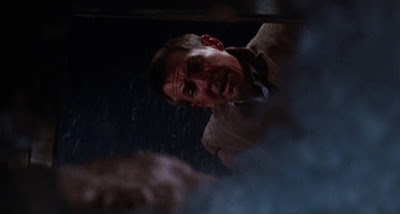 While there are things wrong with it there are also a lot of things right with Psycho III. Perhaps the movie’s greatest asset was Anthony Perkins, not as star but as director. He really does a fine job. The atmosphere of insanity and general wrongness, and at times out-and-out weirdness, is very impressively achieved. And while Perkins didn’t want to do it as a slasher film he handles the grisly murders with a surprising amount of style. Any Psycho sequel will obviously have to reference the shower scene in Hitchcock’s movie. Psycho III actually does this quite cleverly and quite effectively, and quite surprisingly. The other very famous Psycho set-piece is also referenced, and equally effectively.

The Region 4 DVD that I watched is an old release with no extras. The letterboxed  transfer is acceptable but not great. There's now a loaded-with-extras Blu-Ray release I believe.

Psycho III is far from being a complete success but it’s much better than its reputation would suggest and it’s actually not bad at all. Recommended.
Posted by dfordoom at 22:50 No comments: