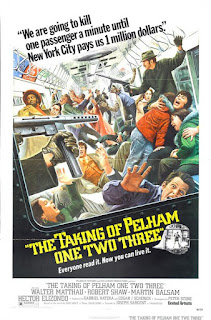 The Taking of Pelham One Two Three (the 1974 version directed by Joseph Sargent not the remake) is a good lesson in what film-making is all about. You don’t need an original idea. It’s the execution that matters. And this is a superbly executed suspense thriller movie.

The basic plot is a stock-standard hijack/hostage suspense thriller but it’s made a lot more interesting by having a New York City subway train rather an aircraft as the hijackers’ target.

Four men calling themselves Mr Blue, Mr Green, Mr Brown and Mr Grey hijack the subway train that leaves Pelham at 1.23pm, hence the film’s title. They demand one million dollars to be paid within one hour. If the money is not paid they will start killing the seventeen hostages one by one. Dealing with a hostage situation is difficult enough at the best of times but when it’s a subway car stopped in a tunnel it’s almost impossible. There is no way of approaching the car without being seen and no way for snipers to get clear shots to pick off the hijackers.

The city bows to the inevitable and agrees to pay the money. But Mr Blue has given them just one hour to make the decision and deliver the money which sets up a thrilling race against time.

The man who has to deal with this mess is Lieutenant Zachary Garber of the Transit Police. It’s not the sort of situation a transit cop expects to have to face. Garber is no super-cop and he makes a few mistakes but he’s unflappable and he’s dogged.

Garber’s immediate problem is to save the hostages but even if the money gets paid he still also has to catch the bad guys. To do that he has to figure out what their escape plan is. Escaping from a subway car in a tunnel seems impossible but the gang must have such an escape plan and since everything the gang has done has been planned and carried out with precision it’s reasonable to assume that the escape plan is just as well planned. Garber doesn’t do anything particularly brilliant. He just follows things to logical conclusions. 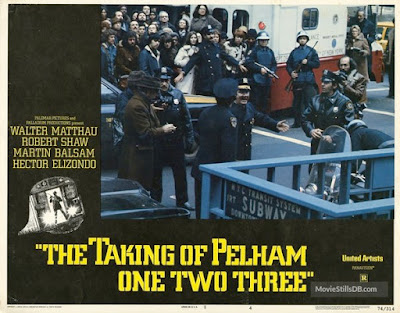 There’s actually not a huge amount of violence in this movie which makes the violent moments all the more effective.

This is a very very New York movie. This is new York in the 70s, for better or worse. But it feels very very real.

Peter Stone’s excellent screenplay throws in some good twists at the end but mostly the tension comes from the reactions of the characters to the stresses they’re under.

Director Joseph Sargent worked mainly in television and on TV movies. He made a few feature films including the brilliant science fiction thriller Colossus: The Forbin Project. The Taking of Pelham One Two Three is a suspense film rather than an action film, and the suspense is maintained at the highest pitch throughout. Sargent is in complete control. 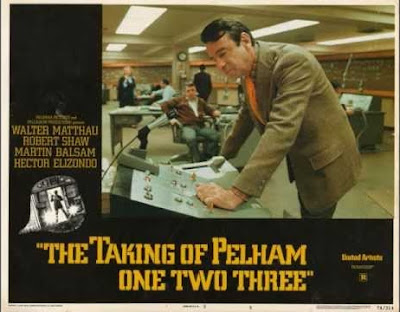 Special mention must be made of Owen Roizman’s gritty cinematography (he also did the cinematography for The French Connection so he certainly knew how to get a New York feel).

The casting is nothing short of inspired. Everything about this movie is so New York that it was a very nice touch to have the chief villain be an Englishman played by an English actor. Robert Shaw plays Mr Blue as a man who seems to have everything, including his emotions, under tight control but there’s obviously a lot of rage bubbling just under the surface and liable to break out at any moment.

Casting Walter Matthau as Garber was a masterstroke. He’s the last guy you’d expect to find playing a cop which is why his performance works. He seems like a real workaday cop rather than a movie cop. 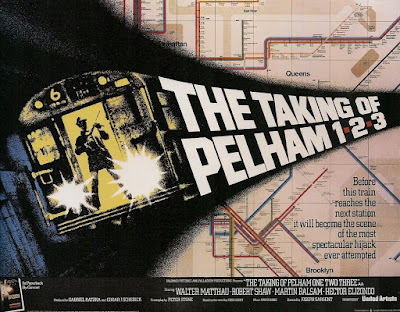 Hector Elizondo is nicely chilling as Mr Grey, a guy who is just a bit too eager to kill people. Martin Balsam is solid as Mr Brown, a subway train driver fired by the Transit Authority who is basically a defeated little man who thinks he’s finally going to make it big.

There’s a lot of humour mixed in with the suspense. Much of it would be considered very political incorrect today but actually it’s quite good-natured, and it’s funny. It’s kept within limits, the emphasis being on the suspense thriller elements.

The Blu-Ray release is bare-bones but looks great.

The Taking of Pelham One Two Three is a meticulously crafted and very effective thriller with a clever low-key battle of wits, and nerves, between Lieutenant Garber and Mr Blue being a major bonus. Highly recommended.
Posted by dfordoom at 21:42 1 comment: 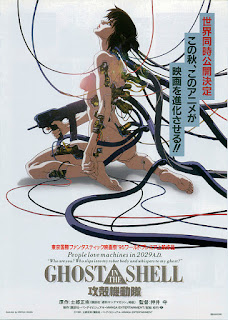 Ghost in the Shell is a 1995 science fiction anime movie that is very much in the cyberpunk mould. You can think of it perhaps as a Japanese Blade Runner, with the same obsession about what it means to be human in a near-future society in which the lines between people and machines have become very blurred indeed. It has to be said that this movie is quite cerebral. If you’re expecting a straightforward science fiction action movie then this ain’t it. This is high-concept ideas-based science fiction with a goodly amount of philosophical speculation, although there is plenty of action and plenty of violence as well. It’s the sort of combination that scares Hollywood to death but doesn’t faze the Japanese at all.

The story of the Ghost in the Shell franchise is a bit complicated. It started as a manga by Masamune Shirow. The original Ghost in the Shell movie (which is what this review is about) followed in 1995. It was directed by Mamoru Oshii and written by Kazunori Itô. A few years later this was followed by the Ghost in the Shell: Stand Alone Complex TV series. The TV series does not follow on directly from the movie however and appears to take place in a different timeline. Then there was a second series of the TV series, and then the Solid State Society movie. Then in 2004 Mamoru Oshii made a sequel to the original movie, Ghost in the Shell 2: Innocence. And I think there are some other iterations as well that I’ve overlooked.

The central character of the movie is Major Motoko Kusanagi. She works for Section 9, a kind of counter-terrorism counter-intelligence agency. When the government wants something done that can’t be done by strictly legal means and they want plausible deniability they call on Section 9. 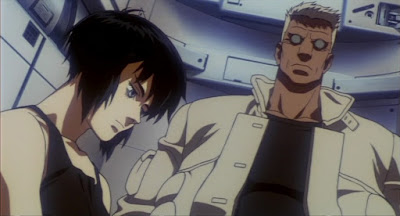 Major Kusanagi is not exactly human. She’s a cyborg. In the Ghost in the Shell universe a cyborg is a human whose brain has been enhanced. The cyberbrain is partly human and partly computer. In many cases cyborgs have bodies that are also artificial. These cyborgs are not machines as such but the extent to which they are still human is perhaps debatable. That’s particularly so in Major Kusanagi’s case. She was once entirely human but now there’s nothing human left of her but her ghost. The ghost is not quite a soul but it is the product of a person’s memories and experiences. It’s what makes a human being a human being. You can call it a soul. Major Kusanagi still has that.

The ghost is what makes one human. Everything else is referred to as the shell.

In a world of cyborgs and cyberbrains there are going to be people who are going to try to hack into people’s cyberbrains. They may even implant false memories. So even a person’s ghost may not be as secure as one might like it to be. 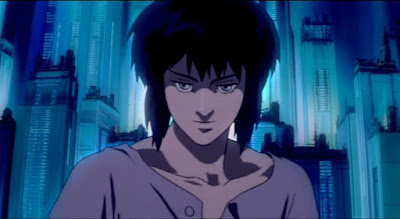 The world of Ghost in the Shell is a troubled place. Terrorism is an ever-present threat. Espionage and white-collar crime are very high-tech enterprises. In the movie the Japanese Government has a problem with its relation to a certain foreign government, part of the problem being that the foreign country in question now has a new government and the leader of the old government wants political asylum in Japan. And there’s the problem of the Puppet Master, a kind of super-hacker. He’s gained that name because when he hacks someone’s cyberbrain they really do become nothing more than puppets.

More worrying is that escaped shell. It’s just a shell. There’s no ghost. Or is there? If there is a ghost in the shell where did it come from? 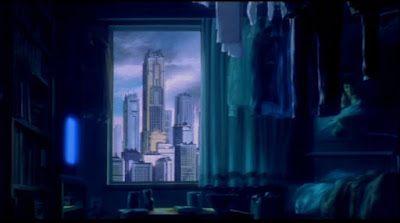 This is a Japanese movie with a distinctively different approach to action scenes compared to American movies. The action sequences are not merely stylised but rather poetic, and at the same time often extremely violent. 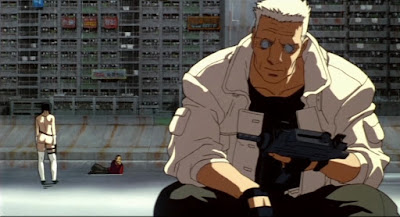 The cyberpunk aesthetic is very strong. This movie though is closer to literary cyberpunk than to American movies with a cyberpunk influence. Can a machine be alive? Can a cyborg remain human? These issues are complex and they’re treated as complex issues without easy answers. These are also issues that other anime productions have grappled with, the most notable being the extraordinary and superb TV series Serial Experiments Lain.

The animation is what you expect from a big-budget 1990s Japanese production. Very stylish and with a heady mix of poetry and violence.

Ghost in the Shell is intelligent thoughtful science fiction, in fact one of the very best science fiction movies of the 90s. Very highly recommended.
Posted by dfordoom at 21:40 No comments: 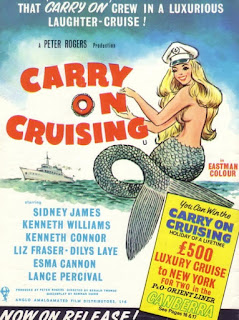 Carry On Cruising was the sixth of the Carry On movies and the first to be shot in colour. A couple of regular Carry On cast members are missing from this one. Charles Hawtrey had demanded top billing and dropped out of the production when producer Peter Rogers refused his request. The official explanation for the absence of Joan Sims was that she was ill but in fact it seems there was a minor scandal over her personal life and she was dropped from the cast.

They almost had to do without Kenneth Williams as well but he was persuaded to sign on by the promise of location shooting in exotic locales and a luxury cruise. In fact the only location shooting was done at Tilbury Docks and everything else was shot in the studio (although some footage of the P&O-Orient liner Oronsay was also used).

The basic premise is that Captain Wellington Crowther (Sid James), master of the cruise ship  Happy Wanderer, is appalled to find new faces among his crew. This upsets him a good deal. He is not a man who approves of change. He is convinced that the newcomers will be nothing but trouble, and of course he’s quite correct. 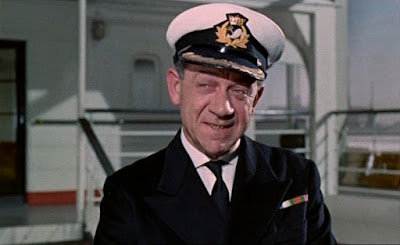 Sid James plays it surprisingly straight as the captain which works since Captain Crowther is the one man who actually knows what he’s doing and is surrounded by well-meaning bunglers. 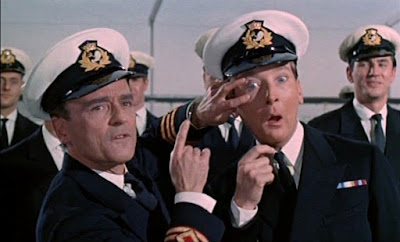 For a movie made entirely on a sound stage and on a modest budget Carry On Cruising looks quite impressive. The sets are extremely good. It doesn’t actually look cheap.

There’s no real effort to convince the viewer that the ship is actually moving and afloat (and there’s actually a gag about this in the movie) but that really doesn’t matter.

This was 1962 so the sexual innuendos, although plentiful, are somewhat restrained compared to later films in the series. There’s also not quite as much visual humour as in the later films. Fortunately the verbal humour is sharp and it’s more than sufficient.

This was Normal Hudis’s last Carry On screenplay before Talbot Rothwell took over the writing duties. 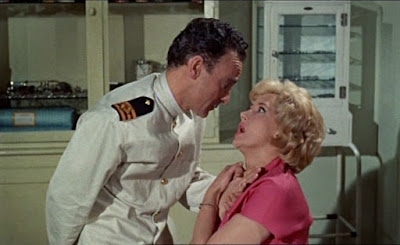 There’s a remarkably good-natured feel to this movie. Some of the characters may be bumbling incompetents but they’re very likeable. While Captain Crowther likes to give the impression of being a martinet he’s really quite amiable underneath. He doesn’t hate his crew, he just wants the cruise to go off smoothly and the passengers to stay happy. He actually likes the passengers.

Carry On Cruising is harmless fun and it’s recommended.
Posted by dfordoom at 12:30 1 comment: