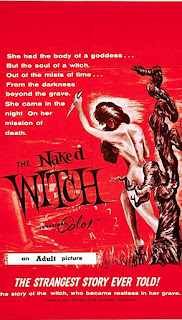 Larry Buchanan was one of the most notoriously inept of all American exploitation film-makers of the 60s. The Naked Witch was his first foray into the fields of low-budget horror and sexploitation. Made in 1961 and co-directed by Buchanan and Claude Alexander, it’s just as terrible as its reputation suggests.

The premise was not without potential. A student has travelled to the village of Luckenbach in central Texas to research the customs of superstitions of the German community there. Not being an American I had no idea that there were lots of German settlers in central Texas back in the 19th century, and that even at the beginning of the 1960s German was still widely spoken there.

What the student (whose name we are never told) is really interested in is the legend of the Luckenbach Witch. This witch was a widow put to death for witchcraft in the mid-19th century. Naturally she not only cursed Otto Schoennig, the man who had denounced her, but all his descendants and she promised to return to have her vengeance.

Sometimes horror movie protagonists start out sane and end up crazy. Others are crazy right from the get go. This student seems to me to fall into the latter category so the first night he’s there he heads for the local graveyard, finds the which’s grave, digs her up and removes the stake that had been driven through her heart. 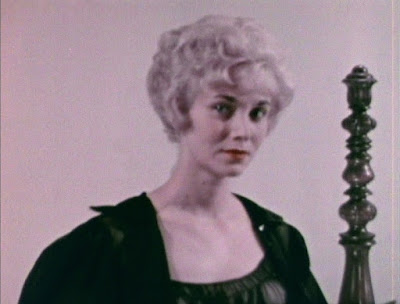 As you might expect she comes back to life (or maybe unlife) and sets out to exterminate the living members of the Schoennig family. In between slayings he enjoys some skinny-dipping in the local waterhole. The student watches her naked cavortings and falls for her charms.

Insofar as there’s a twist to this movie it’s the fact that the widow witch was pretty much entirely innocent (of witchcraft at least) and was the victim of her cowardly and vindictive lover, Otto Schoennig. 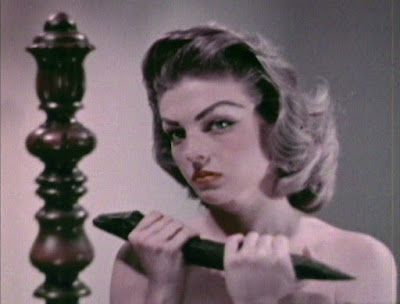 The exasperating thing about this film is that the ingredients are there for a fairly decent horror and/or nudie flick. The setting and the German background are interesting. Some of the locations are actually quite cool. The premise is thin but good horror movies have been made with much thinner premises.

The budget was minuscule - about $8,000. The one special effects scene is hopelessly amateurish but that’s just one brief scene. This is not a movie that relies on special effects. Parts of the movie have synchronised dialogue and part don’t. But the low budget isn’t the problem.

The problem is that it plays like a movie made by someone who had not the slightest idea of how to make a movie. Even that is not always a fatal weakness. Doris Wishman didn’t have a clue how to make movies but she still managed to make some entertaining movies. 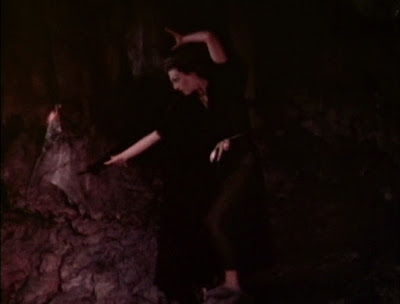 Actually the Doris Wishman comparison is perhaps quite apt. If you look at a movie like Indecent Desires, which was the closest Wishman got to making a horror movie, it’s much more technically incompetent than The Naked Witch. In fact the film-making in The Naked Witch is not so much technically incompetent as just incredibly unimaginative. Indecent Desires is crazy and outrageous and it’s thoroughly enjoyable in its own slightly bonkers way. But there’s no sense of fun in The Naked Witch, no sense of the outrageous and (fatally) there’s no real craziness. Wishman didn’t know what she was doing she loved making movies and it shows.

The Naked Witch commits the one unforgivable sin. It’s dull.

Another problem is that Buchanan couldn’t seem to decide if he was making a horror movie or a nudie movie. There’s not really enough horror content for a horror film and there’s not enough nudity for a nudie film. Given the lack of directing talent on display here it might have been wiser to make it a fully-fledged sexploitation movie. If you don’t know what you’re doing then adding some naked women is probably a sound policy. It worked for Doris Wishman. 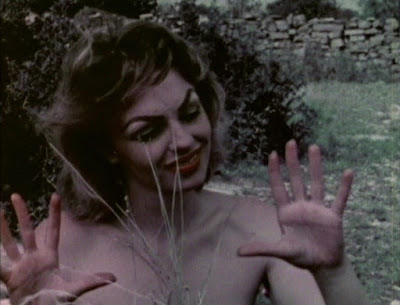 Something Weird have found a colour print of this film. It was shot in 16mm and blown up so the resolution was probably never much better than what we see here. Not a great colour print but it’s probably surprising the movie has survived at all. It’s released on a double feature disc with Crypt of Dark Secrets and a stack of extras which includes a director’s commentary track for The Naked Witch. Larry Buchanan was apparently really happy with this movie!

The Naked Witch is a curiosity. It had potential but it doesn’t quite make it.

As usual Something Weird have come up with plenty of extras including some brain-numbingly bizarre short subjects.
Posted by dfordoom at 18:06 No comments: 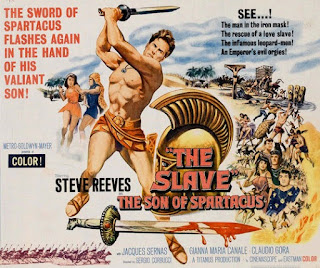 The Slave is a 1962 Italian peplum directed by Sergio Corbucci. The fact that the original title was Il figlio di Spartacus (The Son of Spartacus) will give you some hints of what you can expect from this movie.

Randus (Steve Reeves) is a Roman centurion and Julius Caesar thinks very highly of him. Randus is a fine soldier and a decent man. Caesar sends him off to Asia Minor to keep an eye on Crassus (Caesar, Pompey and Crassus between them controlled the whole of Rome’s empire). Randus suffers shipwreck and is then enslaved but he escapes with some help from another slave (who will play an important part in the story). During this episode he makes a terrifying discovery - he is actually the son of Spartacus! Spartacus of course led a major slave revolt about a quarter-century earlier. The fact that it was Crassus who put down the slave revolt and that Spartacus died in battle against him (or was crucified afterwards depending on whose account you believe) is obviously going to colour Randus’s feelings about Crassus.

Already very early in the picture Randus rescues a slave girl named Said who is being beaten, so we’re set up for the idea that sympathy for slaves seems is ingrained in the young centurion. The slave girl ends up being bought by Crassus’s wife Claudia.

Randus is now torn between loyalty to Rome and his destiny as the son of Spartacus. We know of course that he’s going to choose the latter - otherwise there would be no movie. But he doesn’t want to reveal himself openly yet.

The Romans are portrayed as being little more than barbarians except that they’re more imaginative in their cruelty. They are definitely the bad guys here. Or at least Crassus’s Romans are the bad guys although many of them are not Romans. And Caesar is played as the good Roman.

The violence of course is not graphic but the sadism and cruelty of the Romans is made pretty explicit. Crassus was very fond of crucifixion as a punishment (he crucified 6,000 slaves after Spartacus’s revolt) and in the movie at least he has come up with a number of twisted variations on the theme plus some other entirely original barbarities. Crassus is not a very nice man.

Needless to say strict historical accuracy was not a priority for the makers of this movie.

Like most Italian movies of its era it has a political slant, in this case the struggles of the downtrodden masses and various conquered peoples against their cruel oppressors. Mind you when you’re dealing with the Romans it’s not hard to feel sympathy for those conquered peoples.

Sergio Corbucci certainly had no problem with action scenes and there are a lot them - enough to satisfy anyone. The sets are impressive. There’s some location shooting in Egypt. On the whole this film succeeds in looking lavish and expensive even though the budget was probably very tight. Italian directors like Corbucci were used to having to get good results without spending a fortune.

Steve Reeves makes a fine action hero, as he did in all his movies in this genre. Claudio Gora makes a delightfully villainous Crassus. Any self-respecting peplum would have a beautiful but dangerous princess (or something similar) and that’s the function that Gianna Maria Canale fulfils as Crassus’s wife Claudia, and she does so with considerable style. She made many peplums and she is always a highlight. Ombretto Colli is also very good as the Egyptian slave girl Saide.

The ending was always going to be tricky. After all if the slaves win and the Romans are defeated that would be a bit too historically implausible, but if the slaves lose that means the son of Spartacus is going to come to a sticky end and that would be a very downbeat ending. So the writers have tried to find a vaguely believable way out of the dilemma and not surprisingly what they’ve come up with is a bit problematic.

The made-on-demand DVD from the Warner Archive series offers a very fine anamorphic transfer without any extras.

The Slave is a better-than-average peplum despite the flawed ending. It's definitely visually impressive and very entertaining. Recommended.

I’ve reviewed some of the other Steve Reeves peplums including Hercules, the rather so-so Goliath and the Barbarians and the slightly odd War of the Trojans.
Posted by dfordoom at 23:25 No comments: