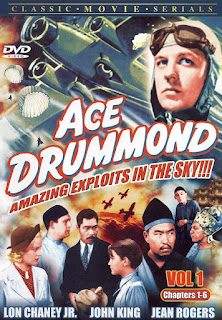 Ace Drummond is a 1936 aviation adventure serial from Universal, and it’s one of the best of the early Universal serials.

This serial is based on Eddie Rickenbacker’s comic strip of the same name. Rickenbacker himself was a colourful and larger-than-life character. He was the highest scoring American air ace of the First World War, a racing car driver, the founder of an automobile manufacturing company and an airline executive as well as being a bitter enemy of President Franklin Roosevelt.

International Airways is trying to establish an international network of air services and of course Mongolia is the key to this. So they need to establish an air field there. They have suffered a series of disasters which appear to be the work of a master criminal known as the Dragon, the intention being presumably to close down the airline’s operations in Mongolia.

In desperation the directors of the airline have called on the services of the G-Man of the Air, the famous Ace Drummond. Drummond very narrowly escapes death on his way to Bai-Tal Field, the Mongolian headquarters of International Airways.

There's another mystery to be dealt with as well. Eminent archaeologist, Dr Trainor, who claimed to have discovered a mountain of jade, has disappeared. His daughter Peggy (Jean Rogers) has arrived in Mongolia to try to find some trace of her father. 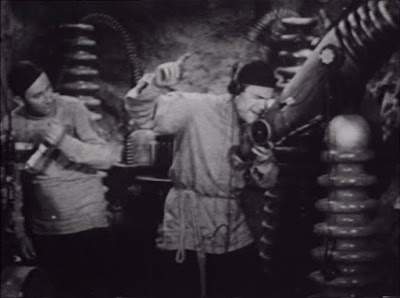 Both Ace and Peggy suspect that the Dragon is behind Dr Trainor's kidnapping.

Singing cowboys were amazingly popular in 1930s Hollywood. Ace Drummond is a variation on the theme - he’s a singing aviator. Whether that’s a good thing or a bad thing is a matter of opinion. I did get a little tired of hearing the one song over and over again.

John King as Drummond is an effective square-jawed hero while Jean Rogers as Peggy Trainor makes a fine heroine. Noah Beery Jr gives a scene-stealing performance as aircraft mechanic and part-time hero’s sidekick Jerry. Jerry could easily have been made into a comic relief character but he isn’t. He’s a sidekick who is resourceful and actually useful, and quite heroic in his own right. 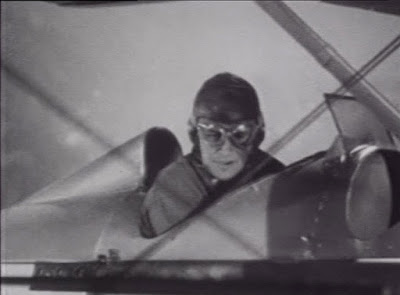 Guy Bates Post gives a florid performance as the Grand Lama of the nearby monastery (where the monks are extremely hostile to the Foreign Devils of the Air). The monastery is not quite the haven of peace you might expect, given that it contains a room specifically designed for the purposes of torture.

There’s also a potentially annoying kid, the son of the airline president, but he turns out to be not as annoying as one might have feared. 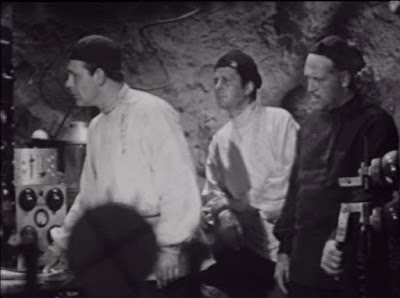 The other notable cast member is Lon Chaney Jr as one of the henchman of the chief villain.

There’s no shortage of action in this serial, and the action sequences are imaginative and exciting. There are lots of aerial sequences and they’re pretty impressive.

The cliffhangers are mostly pretty good. As you might expect quite a few involve air crashes.

The identity of the chief villain, the Dragon, is reasonably well concealed. One interesting feature is the killing off of a heroic character, rather surprising in a serial. 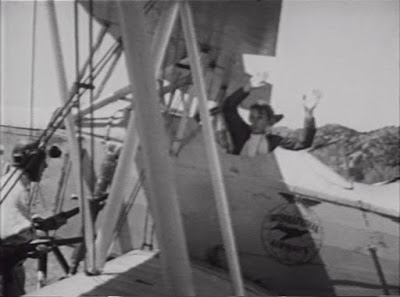 This is a Universal serial so the production values are somewhat higher than you’d find in a contemporary Mascot serial. The sets are quite good, especially the monastery sets. There are some gadgets, the best by far being the use of the fans and prayer wheels and even water wheels as radio receivers for messages from the Dragon.

Ace Drummond is available on DVD from several sources. My copy was from, Alpha Video. Both the image quality and sound quality are quite good (by Alpha Video standards anyway).

Ace Drummond is a truly excellent serial. Highly recommended. There were quite a few other 1930s aviation-themed serials, such as The Mystery Squadron (which is also highly enjoyable).
Posted by dfordoom at 00:32 No comments: