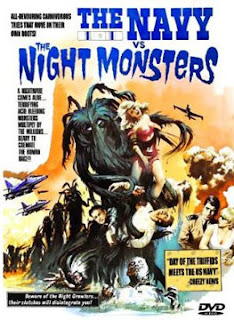 The Navy vs. the Night Monsters  is a slice of classic 1960s drive-in movie cheesiness.

As so often in sci-fi/horror movies of that era the threat to humanity originates in the frozen wastes of either the Arctic or Antarctica. In this case it’s Antarctica. Plant samples from the frozen continent are being flown to a remote US Navy base at Gow Island but disaster strikes the aircraft and it has to make an emergency landing. There is only one survivor, the pilot, and he’s in no condition to tell anything of the odd events that caused the aerial mishap.

Before very long personnel at the base start to disappear and then turn up dead. Of course if you’re a horror movie fan then at this point you’ll be suspecting that those plant samples belonged to giant walking carnivorous plants. And you’d be spot on! It takes a while for the base’s resident scientists to catch on.

This particular base doesn’t seem to be especially well equipped - when the killer plants cut the wires to the generator the task of repairing the damage is quite beyond the capabilities of the personnel here. The officer in charge, Lt Charlie Brown (Anthony Eisley), eventually realises the full significance of the menace posed by these vicious plants. The only way of stopping them seems to be by using fire. 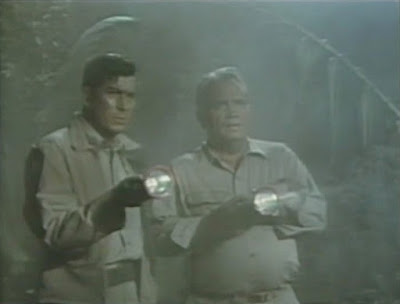 There’s the expected romantic sub-plot involving beautiful Navy nurse Nora Hall (Mamie van Doren), and there are the usual conflicts between the Navy people and the somewhat irritable civilian meteorologist.

It’s played to a large extent for laughs, and the comic elements are rather heavy going. But this is very much standard drive-in fodder so you expect that sort of thing. On the plus side there’s plenty of enjoyably goofy technobabble. And the monsters are as cheesy as one could possibly desire. 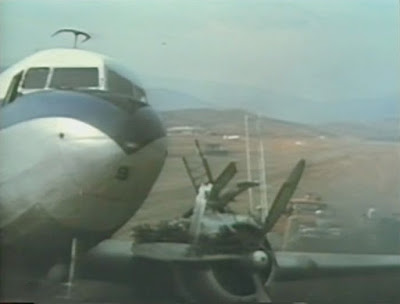 The acting is exactly what you expect in a low-budget drive-in movie. Oddly enough Mamie van Doren isn’t given to many opportunities to show off the spectacularly voluptuous figure that made her a B-movie queen. As an actress her abilities are strictly limited but they’re more than adequate for his role.

Of course you know that sooner or later someone will decide to all in an air strike by Navy bombers to pulverise those rampaging killer shrubs, or in this case to zap them with napalm. Half a dozen aircraft duly arrive, and in each shot they strangely metamorphose into entirely different types of aircraft. That sort of thing is one of the great joys of low-budget sci-fi movies. 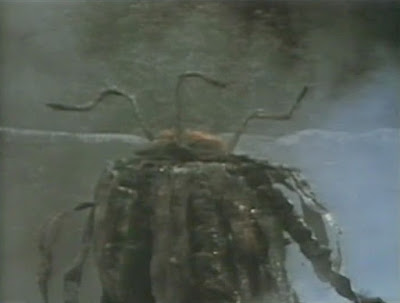 It’s not overly scary but even at the time the picture was released it was essentially an exercise in campy silly fun and on that level it works admirably. I certainly enjoyed it.

The Region 1 DVD comes to us from an outfit called Cheezy Flicks. They don’t seem to have done a great deal in the way of restoration but these days we have to be grateful that such obscurities are being released on DVD at all.

If you’re in the mood for a popcorn movie you could do a lot worse than The Navy vs. the Night Monsters. Recommended.
Posted by dfordoom at 22:48 No comments: 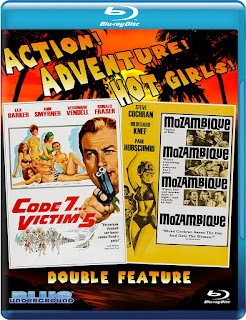 Mozambique is a 1964 low-budget crime thriller from writer-producer Harry Alan Towers employing his successful and profitable formula of shooting in exotic but very cheap locations.

Brad Webster (Steve Cochran) is an American pilot in Lisbon and he’s down on his luck. After a plane crash no-one wants to hire him. Finally he is offered employment by a certain Colonel Valdez, to fly aircraft in East Africa (specifically Mozambique). For some reason the Portuguese police are very anxious that he should accept this job. In fact Inspector Cammaro (Paul Hubschmid) insists, and he is a very persuasive man.

On the flight to Lourenço Marques he meets beautiful blonde Danish singer Christina (Vivi Bach). She’s also been offered a job and a one-way plane ticket by Colonel Valdez.

On arrival he discovers that Colonel Valdez has passed away, to the regret of absolutely nobody. His extensive wealth and business interests (some legal and some illegal) are now up for grabs and his former business manager, the smooth but sinister Da Silva (Martin Benson), wants to make sure that he gets his share. Or, preferably, considerably more than his share. Valdez’s former business rival Henderson (Dietmar Schönherr) also hopes to profit from the sad demise of the colonel.

Brad just wanted a flying job but he’s drawn into a web of corruption, smuggling and murder. Not to mention white slavery. He can’t escape from the web because the chief Portuguese police investigator Cammaro won’t let him (and Cammaro has a number of charges that he is holding over Brad’s head) but he also can’t escape because he’s fallen for Christina and she’s landed herself in deep trouble having wandered unwittingly into the white slavery racket mentioned earlier. 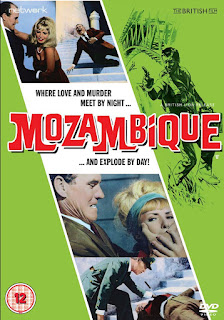 It’s a reasonably solid plot and there is perhaps just a very slight tinge of film noir to Mozambique. In fact it can be seen as falling into the fascinating sub-genre of tropical noir, a sub-genre that flourished in the 40s and early 50s and included movies like Singapore.

Steve Cochran was a very fine actor who should have had a better career. His best movies were in the film noir mould (movies such as the superb Highway 301 and the amazingly bleak Private Hell 36). By the time he made this film his drinking and womanising was clearly taking its toll and in fact he died (in scandalous circumstances) before the movie was released. Nonetheless he gives an excellent performance. Cochran was always good at playing bad boys. This time he’s a bit of a bad boy but underneath he’s a decent guy who just isn’t getting the breaks.

Hildegard Knef is just as good - mysterious, sultry and obviously dangerous. She’s the femme fatale and she does it well.

Vivi Bach is quite adequate as the naïve but charming Christina. Martin Benson makes an effective villain. Dietmar Schönherr is excellent as the devious Henderson.

Hildegard Knef had by this time begun a second very successful career as a singer and she gets to sing in this film (and she really is pretty good with that deep sultry voice). Vivi Bach also gets to sing, in a very different style - a light frothy 60s pop song that is kind of fun.

The visuals are a definite strength. The film was shot in Mozambique and Towers found some great locations. There’s some very nice colonial-era architecture. And if you’re looking for a place to shoot an exciting action climax you can’t do much better than the bridge over Victoria Falls. 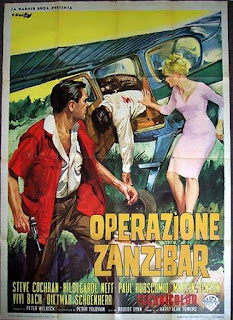 A major highlight is the glimpse into a now vanished world. Mozambique was still a Portuguese colony in 1964. Whatever one thinks of colonialism there’s no question that it provided great backgrounds for adventure films and thrillers. This is a world of seedy sometimes desperate European expatriates, all on the make. It’s a world tailor-made for danger, romance and intrigue.

Blue Underground have released Mozambique on Blu-Ray, paired with another Harry Alan Towers production, Code 7, Victim 5, on a single disc. The anamorphic transfer (the film was shot in the Cinemascope ratio and in Technicolor) is very satisfactory. There are no extras but both movies are fun making this a good value for money double-header package.

Don’t expect an enormous amount of excitement. This is a crime suspense movie rather than an adventure romp but the suspense is done fairly well. The script is workmanlike and the acting is generally exceptionally good - much better than one would normally expect in such a movie. Mozambique is thoroughly enjoyable if you have a taste for the old-fashioned style of thriller. There’s also the tropical noir flavour alluded to earlier. Highly recommended.
Posted by dfordoom at 22:04 No comments: 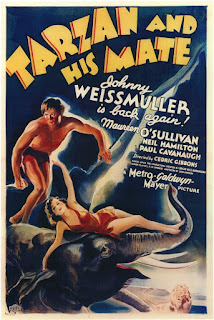 Tarzan and His Mate is one of the most notorious of all Hollywood pre-code movies. In fact it was considered so brazen and shameless at the time of its release in 1934 that it became one of the main reasons for the tightening up  of the Production Code. Until fairly recent times it’s only been available in a savagely cut version, with all that pre-code naughtiness removed.

It’s also possibly the best of all the Tarzan movies, and one of the greatest of all jungle adventure films. You could almost say it’s the Citizen Kane of jungle adventure films! Even now it still seems remarkably fast-paced and action-filled. There’s a considerable reliance on stock footage (in fact quite a lot of the footage is from an earlier MGM movie, Trader Horn) and on rear-projection. The process shots don’t seem very realistic today, but back in 1934 this movie offered spell-binding excitement. In fact even today it’s pretty exciting.

The plot is somewhat involved for a jungle movie, with an old flame of Jane’s setting out on an expedition to find the fabled elephants’ graveyard and the enormous cache of ivory it contains. He wants the ivory, but the real prize that he seeks is Jane. Harry is a decent sort of chap really but his partner is another matter. He’s motivated purely by greed, but disguises these base motives under an exterior of charm and affability. To reach the elephants’ graveyard these two mismatched explorers will need the help of Tarzan. 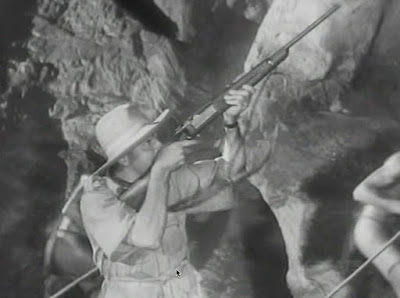 Johnny Weissmuller gives his standard performance as Tarzan, and it works. While he can’t really act he does manage to convey a certain sense of fun which makes Jane’s decision to share his jungle life reasonably understandable.

The supporting cast is quite adequate. Neil Hamilton is very good as Harry, a decent fellow really but we know that he’s not likely to be able to win Jane away from Tarzan. Paul Cavanagh as Harry’s partner Martin makes an effective, very sneaky and very caddish, villain. 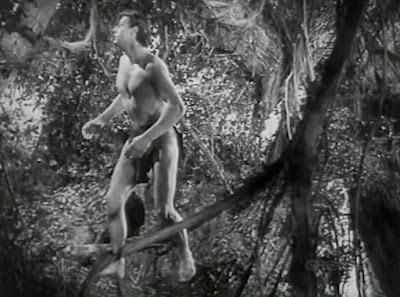 The real highlight though is Maureen O'Sullivan as Jane. Wearing very little clothing (one of the reasons the movie is so controversial) she’s feisty and sexy and charming and bubbly and generally adorable. 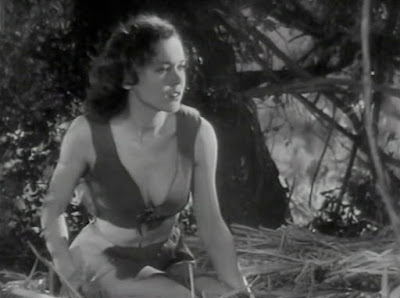 It’s probably worth pointing out that the movie is not quite as immoral as it seems. It’s made quite explicit that Tarzan and Jane consider themselves to be married.

It’s also an exceptionally violent movie, at some points quite disturbingly so.

Tarzan the Ape Man had made an enormous amount of money for MGM in 1932 and for the follow-up movie, Tarzan and His Mate, the studio was prepared to be very lavish in the budgetary department. The action scenes are quite spectacular. The climax, with Jane along with Harry and Martin facing an entire army of lions, is certainly memorable. The elephants’ graveyard is another visually impressive sequence. 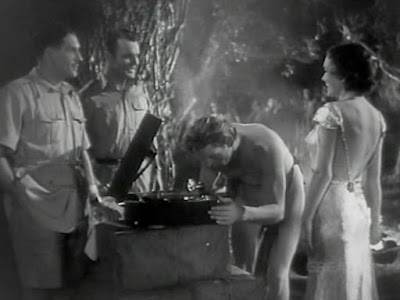 I caught this one on cable TV here in Australia but there have been several DVD releases.

If you’re only ever going to see one Tarzan movie, this is the one to see. It remains highly entertaining, and its notoriety makes it a must-see. Highly recommended.
Posted by dfordoom at 12:21 No comments: