my favourite cult movies of 2018

Yes it’s time once again for making “best of” lists. I haven’t seen enough cult movies in the past year to do a proper top ten list so I’ve contented myself with a top half-dozen, rank by year of release not quality.

The Monster That Challenged the World (Arnold Laven, 1957)

I'm going to give an honourable mention to The Time Travelers (Alexander Singer, 1976), an interesting TV-movie which was actually a pilot for a projected TV series that never eventuated. 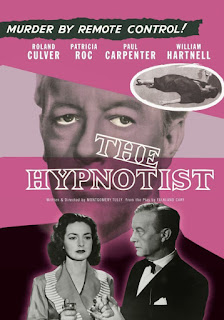 The Hypnotist (later re-released as Scotland Yard Dragnet) is a 1957 psychological thriller from Britain’s Merton Park Studios. Like most of the studio’s output it’s a low budget production and like most of their output it’s better than you might expect.

In this case it’s also a bit stranger than you might expect.

It starts with test pilot Val Neal (Paul Carpenter) almost being killed when a test flight goes wrong. Against all the odds he escapes with only very minor injuries and he quickly makes a full recovery. Except that it’s not quite a complete recovery. He has these attacks. He becomes very breathless and suffers agonising chest pains. Since there is absolutely nothing physically wrong with him it looks like it’s a case for the psychiatrists, and his fiancée Mary (Patricia Roc) manages to persuade a very eminent man in that field, Dr Francis Pelham (Roland Culver) to take Val on as a private patient.

The therapy seems to make little progress. Since as everyone knows all mental problems can be explained by a repressed childhood memory Mary decides to take a pro-active approach - instead of waiting for Dr Pelham to uncover this repressed memory she’ll do a bit of digging into Val’s past and maybe she’ll find the answer that way. 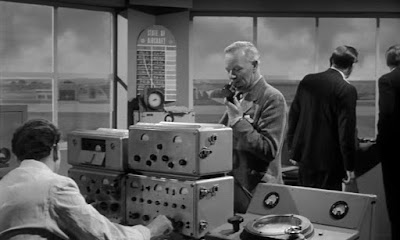 While she’s doing this Val has a little adventure. While under hypnosis he runs off and after wandering the streets, not even being able to remember his own name, he meets a rather charming young lady in a jazz club. The following morning he remembers his name and returns home.

So far the film seems to be an odd and slightly overwrought psychological melodrama but after nearly an hour it suddenly changes gears and the main plot, a murder mystery plot,  kicks in. The slow buildup could be seen as a flaw but I think it works. It’s a movie that leads us up the garden path and the sudden unexpected act of violence comes as a shock. 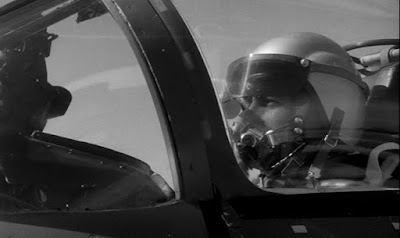 Movies from the 40s and 50s dealing with psychiatry and hypnosis are always fun. There’s the delightful child-like faith that people had in such things back then, and the way psychiatrists were regarded almost as magicians. This movie is a particularly good example of the psychiatry-as-magic genre. All you have to do is to find that one crucial memory from the patient’s childhood and he will be instantly cured. And hypnosis is incredibly powerful and you can’t fight against it.

The oddness in this movie doesn’t come from the plot (which is not dazzlingly original) but more from the delightfully sensationalistic and rather outrageous treatment of the hypnosis theme. 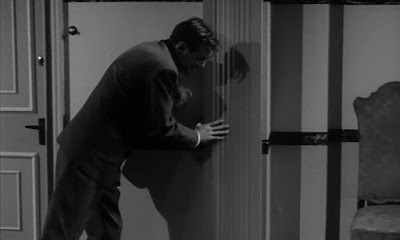 Roland Culver is marvellous as always, playing his role with a twinkle in his eyes. It’s a nicely judged performance - Dr Pelham seems like a dedicated and kindly doctor but can we be sure he is what he seems to be?

Paul Carpenter is quite effective as Val, playing him as mostly an easy-going likeable kind of guy but also as a guy who could certainly have some dark secrets and perhaps the potential to lose control completely. As is the case with Dr Pelham we’re uncertain whether to take Val at face value or not. 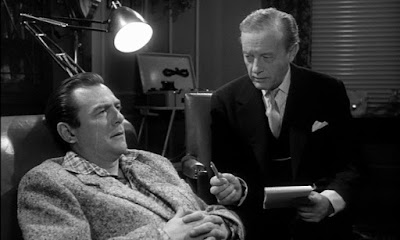 Writer-director Montgomery Tully was an artisan rather than an artist but his films, particularly in the B-movie crime genre, are usually solid and quite watchable.

Network’s Region 2 DVD release offers an excellent anamorphic transfer. The black-and-white image looks great. Extras are pretty much non-existent - a trailer and a stills gallery (which is more than you usually get from Network).

The Hypnotist is perfectly enjoyable and the psychobabble adds extra entertainment value. Recommended.
Posted by dfordoom at 21:14 No comments: