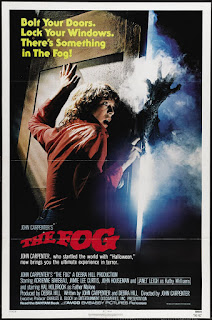 The Fog is an early John Carpenter film that manages to be classic gothic horror whilst still having a very contemporary feel. It’s an old-fashioned ghost story but with some of the techniques of the slasher film. When the movie was completed it was realised that a 1980 audience was going to expect much more overt thrills so extensive reshoots were done. The movie ended up doing surprisingly well at the box office despite being a bit of a hybrid.

The little seaside town of Antonio Bay in northern California is celebrating its one hundredth birthday. Antonio Bay is a quiet little town. In fact the last time anything exciting happened here was a hundred years go when a ship called the Elizabeth Dane was wrecked in the bay, the disaster being caused by a mysterious fog. That event led to the foundation of the town.

Gothic horror often involves a curse, and the curse is often a collective one, falling upon an entire family. In this case it’s the entire town that is under the curse. That curse is the consequence of certain terrible things that happened exactly a century ago.

It starts with odd things happening. Car alarms going off for no reason, windows shattering, lights inexplicably flashing on and off. And there’s a fog, just as there had been in 1880. The fog is heading straight for a fishing trawler, the Sea Grass.

The local priest knows what’s going on. He’s found an old diary that recounts the events of that night in 1880 and reading that diary has almost sent the good priest over the edge of madness.

Now the unearthly fog of 1880 has returned and there’s something evil and deadly in that fog.

Carpenter started making horror movies at a time when a certain amount of gore was pretty much required if you expected to get a commercial release. While Carpenter didn’t seem to object to gore he didn’t really need it. He was good enough to scare us without the gore. In The Fog he doesn’t overdo it. In fact there’s a lot of implied gore. There are ultra-violent killings but you don’t really see much at all. The violence was mostly added in the reshoots.

What Carpenter did have was a very fine talent for atmosphere. In The Thing he uses the Arctic wastes and the horror of snow and ice with terrifying effectiveness. In The Fog his setting is a picturesque California seaside town but he still manages to build some incredibly creepy atmosphere.

And Carpenter certainly had the technical skills. He keeps the tension ratcheted up very nicely and when he throws in his scares they do scare.

The Fog has a pretty decent cast. Adrienne Barbeau as the radio station owner and operator (effectively it’s a one-woman radio station), Jamie Lee Curtis as hitch-hiker Elizabeth Solley, Janet Leigh (who was of course Jamie Lee’s real-life mom) as Antonio Bay’s chief civic booster Kathy Williams and Tom Atkins as the closest thing the film has to a conventional hero are all very solid and Hal Holbrook is fun as the well-meaning whisky priest.

The location shooting is impressive and even includes a couple of scenes shot at locations used by Hitchcock in The Birds. The radio station in the light house is a rather cool idea.

Carpenter’s biggest cinematic influence was not a horror director but Howard Hawks. Carpenter’s career has essentially been an attempt to do horror, sci-fi and adventure movies in the Hawks style.

Carpenter also cites Lovecraft as a major influence on The Fog, and there are certainly some Lovecraftian touches.

The Fog is a low-budget movie (it cost just over a million dollars at the time) but the special effects are very effective. Carpenter is smart enough not to try anything too ambitious. It’s better to stick to simple effects that work and that’s what he does. The ghosts look very creepy. The fog looks mysterious and menacing.

The Region 4 DVD offers a nice anamorphic transfer. The film was shot in the 2.35:1 aspect ration that Carpenter preferred (and used with such skill). There’s a lively and chatty and very worthwhile audio commentary by Carpenter and producer Debra Hill. Carpenter is a guy who gives the impression that he absolutely loves doing audio commentaries for his movies.

The Fog manages to combine the visceral thrills of the slasher film with the moodiness and spookiness of the traditional ghost story and it’s a blend that works very well indeed. One of Carpenter’s best, and certainly one of the best horror movies of its era. Highly recommended.
Posted by dfordoom at 19:06