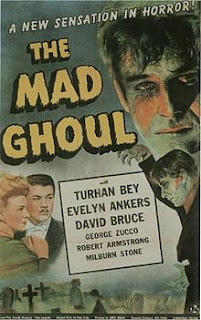 The Universal horror movies of the 1940s are a bit of a mixed bag but The Mad Ghoul does have quite a few things in its favour. Most notably it has the right cast. It has George Zucco as a mad scientist, it has famous scream queen Evelyn Ankers and it has Turhan Bey to add the necessary touch of exoticism.

Zucco plays chemist Dr Alfred Morris who has been researching some strange aspects of ancient Mayan rites. He believes that the Mayans may have used a type of poison gas to induce what he calls a state of death-in-life. He also has a theory about the Mayans’ rather unpleasant custom of tearing out the hearts of living sacrificial victims. He believes they had a means of reversing the state of death-in-life.

With his eager young student and assistant Ted Allison (David Bruce) Dr Morris is determined to prove the correctness of his theory.

At first we assume that Dr Morris is the kind of movie mad scientist who is led into evil through his single-minded pursuit of science without any moral grounding. He scornfully dismisses the idea of morality. He is a scientist and believes there is no good or evil, only true or false. There is however another factor at work in this case. Dr Morris knows a good deal about science but he is a fool when it comes to women. 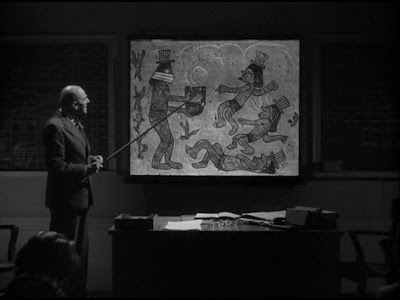 The worst thing is that he thinks he knows all about women. And as the old saying goes, there’s no fool like an old fool. Dr Morris’s foolishness about women will lead him to use his knowledge of science for evil rather than good.

Young Ted is also somewhat naïve when it comes to women, and this will have equally disastrous results for him. Ted is engaged to be married to popular singer Isabel Lewis (Evelyn Ankers) but he has an unknown and formidable rival in the person of her accompanist, Eric Iverson (Turhan Bey). 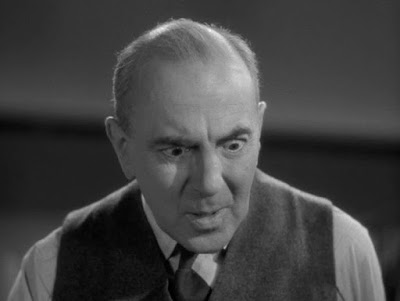 Soon a ghoul is on the loose, robbing graves all over the country. There seems to be some mysterious link to Isabel Lewis. Of course Isabel herself cannot possibly be involved. Reporter Ken McClure (Robert Armstrong) has a theory but he will need some hard evidence before he can go to the police. He has an idea he knows how to find that evidence.

George Zucco is in fine form. Dr Morris is the kind of mad scientist who doesn’t struggle very hard against the temptations of evil but he’s smooth and clever and he’s able to maintain an outward appearance of respectability. People trust Dr Morris. Zucco doesn’t overdo his performance - Dr Morris is a villain but he’s a victim of his own delusions and he’s not entirely unsympathetic.

David Bruce does an excellent job as the hapless innocent Ted Allison. Evelyn Ankers makes a sympathetic and glamorous heroine. Turhan Bey is as suave as ever as her handsome lover. 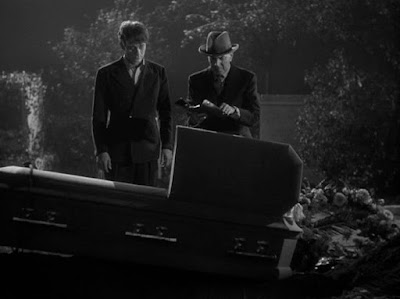 While the term zombie is never used this can be seen as a type of zombie movie, with a scientific rather than mystical explanation.

One of the great things about this movie is the lack of comic relief. I just can’t tell you what a joy it is to encounter a 1940s Universal horror flick without irritating comic relief. Even the smart aleck reporter is mostly played very straight.

The movie includes many of the staples of Universal horror films with some nicely atmospheric graveyard scenes. The makeup effects (by the legendary Jack Pierce) are effective without being in any way excessive. Universal’s horror films of this era might have been uneven but they always looked good. 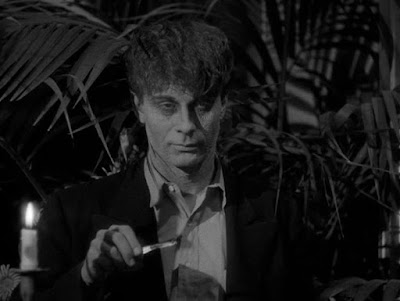 The script, by Brenda Weisberg and Paul Gangelin, is serviceable and in fact surprisingly intelligent and has some original touches. Director James P. Hogan spent his career in B-features but he knew his business and his work here can’t be faulted. He gets the most out of the material and the results are quite classy by B-movie standards. Sadly Hogan died of a heart attack shortly before the film’s release.

The Mad Ghoul is one of the five movies included in TCM’s excellent (although hard to find) Universal Cult Horror DVD boxed set. Sound quality is just a little uneven. On the other hand the image quality is superb. There are a few extras. The Mad Ghoul is a neat little horror movie that has been unjustly neglected and is highly recommended. As for the TCM boxed set, it’s pretty much a must-buy for classic horror fans.
Posted by dfordoom at 20:03 1 comment:

Sherlock Holmes and the Voice of Terror (1942) 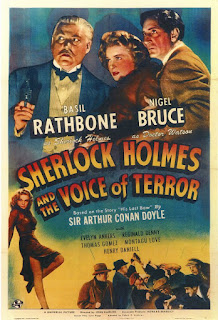 The contemporary settings of the Universal films are not generally too much of a problem. The wartime background was a less successful experiment which Universal mercifully abandoned after the first few films.

Sherlock Holmes and the Voice of Terror was based, very loosely, on Conan Doyle’s short story His Last Bow. This 1917 story, which in my opinion is one of the weakest of all Conan Doyle’s stories, had pitted Holmes against a Germany spy during the First World War. The spy theme is the only element of the short story utilised in the screenplay by John Bright and Lynn Riggs. 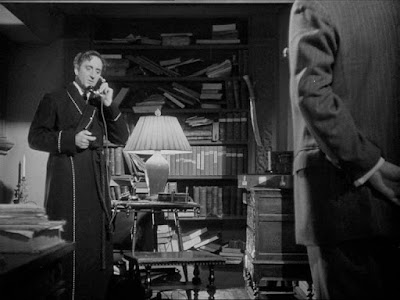 Britain is being demoralised by a series of propaganda broadcasts from Germany. The broadcasts predict acts of sabotage. What really worries the British intelligence chiefs is that the predictions are always accurate. They are so worried that they are prepared to resort to desperate measures - they have called on Sherlock Holmes for help. Holmes has one clue to work with - the dying words of one of his operatives. He also has the assistance of the dead man’s girlfriend Kitty (Evelyn Ankers) and can also count on assistance from London’s underworld after Kitty delivers a stirring patriotic speech to them.

It is obvious that the Germans have a sophisticated espionage and sabotage operation in place in Britain and that they have access to secrets that can only come from sources in high places. They are determined to safeguard their spy ring and attempt have been made on the lives of several senior British intelligence chiefs - and on the life of Holmes as well. 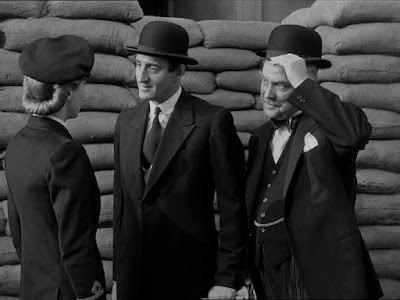 Kitty will play a vital role in uncovering this network, having attracted the amorous attentions of one of the Nazi ringleaders.

The German spy network is set to pull off its greatest coup and it appears that they have the British thoroughly bamboozled. Holmes however is not so easily fooled.

Basil Rathbone and Nigel Bruce had settled into their respective roles very well by this time. Bruce plays things fairly straight this time, as he was alway perfectly capable of doing. In fact there’s virtually no comic relief in this film. Thomas Gomez is a subtly menacing villain. The very underrated Henry Daniell provides fine support as does Reginald Denny. Evelyn Ankers shines as Kitty. 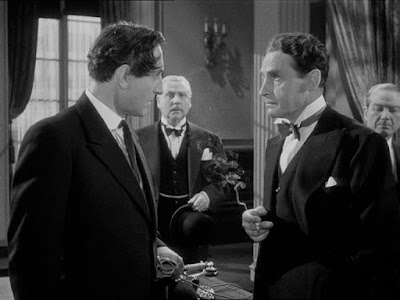 I personally have a strong dislike for wartime propaganda movies. The more hysterical the propaganda the less I like them and the tone of this film is very hysterical indeed.

On the plus side this movie is very impressive visually. The look of the movie is reminiscent of both the great 1930s Universal gothic horror movies and the film noir style although in fact the noir style was only just beginning to emerge in 1942. Director John Rawlins is very fond of extreme close-ups which he uses to excellent effect. This was unfortunately the only Universal Sherlock Holmes movie that Rawlins directed. 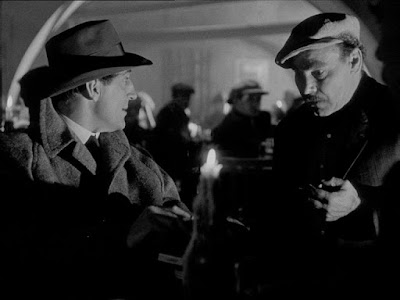 There was nothing outrageous about having Sherlock Holmes hunting spies. Several of Conan Doyle’s original short stories are in fact espionage stories. Pitting the great detective against Nazis though just seems too anachronistic. The stridently propagandistic tone doesn’t help at all and there are way too many political speeches.

Sherlock Holmes and the Voice of Terror is not a complete success. Critics at the time were unenthusiastic but it did great business at the box office. The best thing about this movie is that its success ensured that there would be more Universal Sherlock Holmes movies. It marked an uncertain start to what would be one of the great B-movie series. Recommended, with reservations.
Posted by dfordoom at 21:20 No comments: