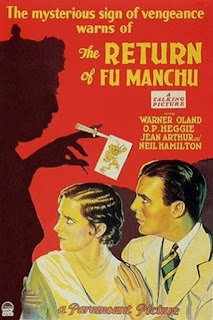 It opens with a recap of the events of the first film. The Mysterious Dr Fu Manchu had offered an explanation for Fu Manchu’s hatred of European civilisation - his wife and child had been killed by white soldiers during the Boxer Rebellion (in which Fu Manchu had been firmly on the side of the European powers) and so his crusade against white civilisation is motivated entirely by personal revenge. This is totally at odds with the character of Fu Manchu as established in Sax Rohmer’s novels and in my view it cheapens and trivialises the character. In the books Fu Manchu is motivated by grander and nobler sentiments. He believes that either western civilisation must dominate the East, or that eastern civilisation must dominate the West and being Chinese he naturally hopes that eastern civilisation will triumph. He genuinely believes that he is fighting in the cause of a superior civilisation. Reducing him to a man bent on personal revenge, like a character in a cheap B-western, makes him far less interesting.

It also makes him less of a larger-than-life character and less of a super-villain, which is unfortunate. Everything about Fu Manchu should be on the grand scale, both his evil deeds and his acts of nobility. This is lost in these early film adaptations.

But I digress. The recap of the earlier film takes place during Fu Manchu’s funeral, attended by his old foe Inspector Nayland Smith. Since the movie is just beginning and Fu Manchu is the central character I don’t think any viewer is going to be the least bit surprised that with the funeral services over Dr Fu Manchu is revealed to the audience as being very much alive. 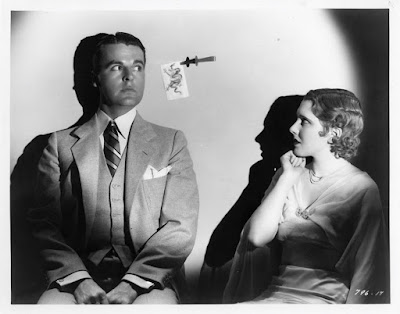 Nayland Smith’s close friend and comrade-in-arms Dr Jack Petrie is about to marry Lia Eltham, both these young people believing they are now free from the menace of Fu Manchu. But Fu Manchu is determined the wedding will not take place. Instead there will be a funeral, Jack Petrie’s funeral. Fu Manchu has set himself the goal of murdering all the British officers responsible for the deaths of his wife and son, and he intends to murder the son of those British officers as well. Dr Jack Petrie is the last name on his list.

The movie takes on some of the attributes of the Old Dark House genre, with the wedding party more or less under siege while Fu Manchu is lurking nearby preparing to strike.

Unfortunately it takes a long time before he does strike. This movie is much too slow. Nothing really happens at all in the first half hour. 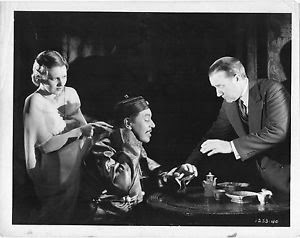 Early talkies have a reputation for being static with too much dialogue and not enough action, mainly because of technical difficulties with the early sound technology. This film definitely has that dreaded static feel to it. Rowland V. Lee was usually a competent B-movie director so I would assume that the problems here were mostly due to those technological issues.

It does improve and the second half of the film features some interesting battles of will between Smith and Fu Manchu and between Petrie and Fu Manchu. It doesn’t matter who is stronger or braver or cleverer, what really matters is who has the greater will. There is a bit of action and at least some suspense.

Warner Oland was a fine actor and he makes Fu Manchu a living breathing character but he doesn’t quite the grandeur and the arrogance and the aura of genius to really capture the essence of the character. Of the many actors who have played the rôle the only one who really nailed it was Christopher Lee. Warner Oland isn’t terrible by any means but he just isn’t Fu Manchu. 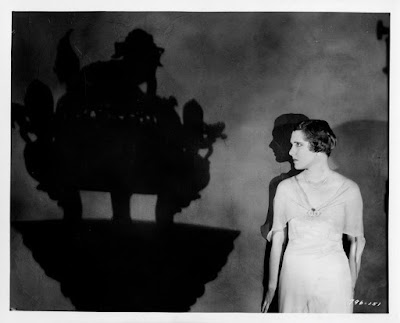 A major weakness is that we don’t see enough of Fu Manchu himself, especially in the early stages. While I have reservations about Oland’s performance there’s no question that he’s the one actor here really worth watching.

When we finally see Fu Manchu in his lair things pick up a bit. It’s quite a good set, in fact very good, and does convey a kind of oriental mad scientist vibe.

The Return of Dr Fu Manchu is at best a partial success. After a very dull start it provides some entertainment value but it fails to capture the essential spirit of Sax Rohmer’s novels.  Hardcore Fu Manchu fans will probably want to see it anyway out of curiosity.
Posted by dfordoom at 22:54 No comments: 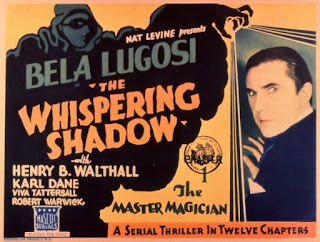 The Whispering Shadow is a 1933 thirteen-part Mascot serial starring Bela Lugosi. It’s a crime thriller with some elements of science fiction and of the fantastic thrown in, and with a hint of the gothic as well.

The Empire Transport and Storage Company has carved out its own market niche. It’s a trucking company but with some very high-tech features. The trucks are in constant communication with the central warehouse by radio-phone. The system seems fool-proof but unfortunately in practice it’s proving to be worryingly vulnerable. Four Empire trucks have been hijacked recently with fatal results for the drivers involved. A sinister figure knows as the Whispering Shadow is believed to be behind the hijackings. There is no real explanation as to why those particular trucks were targeted.

When another trucks is attacked and the kid brother of chief dispatcher Jack Foster (Malcolm McGregor) is killed the company decides to get serious. They hire the celebrated detective Robert Raymond (Robert Warwick) to take over security.

There’s an extraordinary amount of plot packed into the first episode, not to mention several action set-pieces. Several intriguing characters are introduced - such as jewel thief Jasper Slade and magician Professor Strang (Bela Lugosi). There are cool gadgets. There’s a shadow that speaks. There’s a wax museum. There’s a prison breakout. There’s a full-scale attack on the company’s headquarters - by autogyro! There’s a death ray! There are at least half a dozen very suspicious characters. And it’s paced like a speeding locomotive. 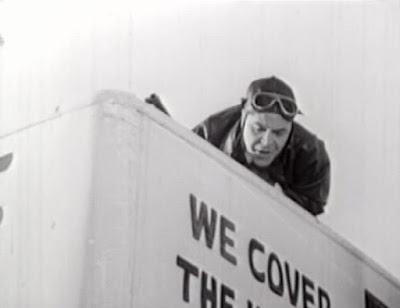 It all has something to do with the most fabulous of all jewel collections, the jewels of the Tsar of Russia.

The pacing doesn’t flag at all. There’s no time wasted on extended dialogue scenes. Any exposition that needs to be done is done at a run. Then it’s time for more action.

The central mystery is the identity of the Whispering Shadow and that mystery is fairly well concealed. Don’t make the mistake of assuming it’s going to be Bela Lugosi - he did several serials and did not always play villains. There are several other very strong suspects. There’s some fairly good misdirection in this serial with all sorts of clues that point to different suspects. 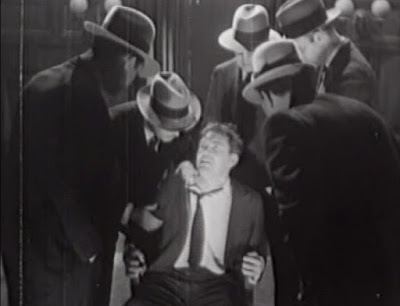 The misdirection is not just to do with the Whispering Shadow’s identity. There seem to be a lot of people after those jewels, some of whom think they have legitimate claims and some of whom are obviously merely crooks. There are political agendas and it’s not clear precisely who is working for whom. The plot twists are actually reasonably nifty.

The Whispering Shadow is a diabolical criminal mastermind with access to terrifying and murderous technologies such as television. He is also a master of radio technology which is of course invaluable for killing one’s enemies at a distance. This particular serial is a celebration of technology's potential for mayhem! 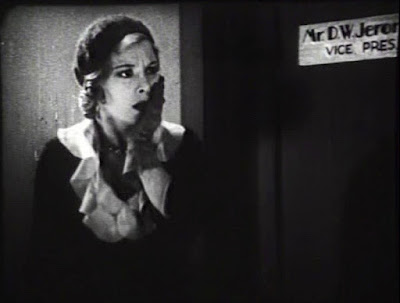 The acting is very much in the hyper-active B-movie melodrama mode but that’s as it should be in a serial. Malcolm McGregor does make a pretty fair square-jawed action hero. Viva Tattersall overacts delightfully as Professor Strange’s daughter Vera. 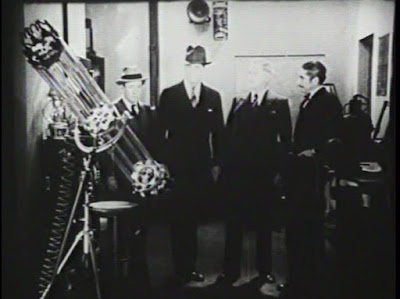 The Alpha Video DVD release, on two discs, is unfortunately rather poor. Sound quality is adequate but image quality is definitely not good. On the other hand the other available versions are either public domain or grey market so there’s no reason to think they’d be any better. The Alpha Video release is watchable and if you’re a fan of serials it’s worth putting up with the less-than-stellar picture quality.

If you’re not a fan of serials than The Whispering Shadow is probably not the best place to start. But if you are a fan of serials you should find plenty of enjoyment here. Recommended.
Posted by dfordoom at 18:05 No comments:

The 1991 TV-movie Knight Rider 2000 was shot as the pilot for what was hoped would be a new series based (albeit a little loosely) on the 1980s hit series Knight Rider. Knight Rider 2000 failed to capture anyone’s imagination, it was not picked up as a series and it seems to be generally disliked by fans of the original Knight Rider series.

Despite this it does have some limited interest for cult movie fans and it is a bit more overtly science fictional than the original television series, with a futuristic rather than a contemporary setting.

For what it's worth here’s the link to my review of Knight Rider 2000 at Cult TV Lounge.
Posted by dfordoom at 20:29 No comments: