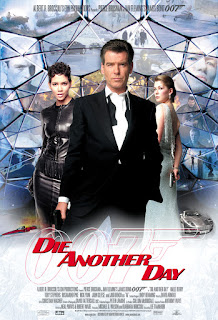 Die Another Day was the last of the Pierce Brosnan Bond movies and the first 21st century Bond movie. You might think it would be impossible to make a Bond movie in the 21st century. Watching this movie would strongly suggest that you’re right.

Interestingly enough in this movie the pre-credits sequence in which Bond is causing mayhem in North Korea is actually part of the main plot, or at least it is an important prologue to the main plot. Bond is captured and spends fourteen months in a North Korean prison. When he is released he finds that MI6 no longer trusts him and no longer wants him. He isn’t pleased about this and he goes rogue. He is convinced that he was betrayed by a mole inside MI6 and he wants revenge. The trail initially leads him to Havana, to a secret medical clinic. He encounters Kickass Action Heroine Jinx (Halle Berry). But to track down the mole he will have to go to to London. There he runs into the villain of the piece, supercilious upper-class business tycoon Gustave Grimes, and he will follow him to his ice palace in Iceland. Lots of action ensues.

It’s probably fair to deal with the film’s strengths first. The action scenes are spectacular. Some are a bit silly but a touch of self-parody in the action scenes has been par for the course in Bond movies since the 70s so that’s no great problem. The highlight of the movie is the sword-fighting scene between Bond and the villain. Sword-fights are the oldest of all action movie clichés but this one has an extraordinary intensity and physicality that makes the cliché seem fresh. The hovercraft battle is original and exciting.

There are enough explosions and gun battles to satisfy any reasonable person.

Some of the gadgets are also on the slightly silly side, like the camouflaged Aston Martin, but again it’s no problem since this is expected in a Bond film.

The sets, by Peter Lamont, are generally superb. Any Bond Villain worth his salt has to have a cool secret headquarters and the ice palace qualifies nicely (and it’s used to excellent effect). The mysterious clinic and the secret MI6 headquarters are terrific as well.

Gustav Grimes is a very serviceable Bond Villain. Toby Stephens plays him as an arrogant public school bully and he puts plenty of enthusiasm into his performance. John Cleese is fun as Q.

They’re the good things in Die Another Day.

Now we come to the problems. Firstly, the CGI effects are not good. The scenes on the aircraft at the end could have been fun but they look very very fake. The space scenes look cheap and fake. The disappearing Aston Martin provokes laughter rather than wonder.

Not one but two Kickass Action Heroines have been added to assist Bond, champion fencer and MI6 agent Miranda Frost and Jinx. Jinx threatens to take over the film. Now the essence of the Bond character is that he’s a loner. He works alone because nobody can work with him. He’s not a team player. He’s a loose cannon. MI6 tolerates him, reluctantly, because he gets results.

There is a standard Bond formula. We know who the villain is right from the start. MI6 knows as well. Bond’s invariable approach is to get close to the villain (whether the villain likes it or not) and get right up his nose. Put as much pressure on the villain as possible and sooner or later he’ll make a mistake and Bond will destroy him. To do all this Bond neither needs nor wants a sidekick. All the Jinx character manages to do is distract us from the plot, slow things down (and it’s a movie that is already way too long) and shift the focus away from Bond. She’s a completely unnecessary character and she serves no plot purpose whatsoever.

It doesn’t help that Halle Berry and Rosamund Pike (as Miranda) are rather dull and their characters are uninteresting. Actually that’s probably just as well since Pierce Brosnan’s performance is bland and colourless. His Bond seems old and tired. Brosnan was nearly 50 when he made this movie. Of course Roger Moore was much older (and fatter) when he was still playing Bond but Moore had style and charisma and an unparalleled ability to make dialogue sparkle. Brosnan sadly lacks these qualities.

One thing that’s amusing is that this is a movie that is trying desperately hard to be feminist but it’s actually the most sexist Bond movie I’ve ever seen. There’s not a single female character in the film. The ostensible female characters (Miranda, Jinx and M) are simply male characters who happen to be played by actresses. If you replaced Halle Berry, Rosamund Pike and Judi Dench with male actors you wouldn’t need to make any changes to the dialogue or the plot or the characterisations. All you’d have to do is eliminate the very unconvincing love scenes that seem out of place anyway. The message of the film seems to be that women are awesome as long as they behave exactly like men.

The movie’s political stance is interesting. The Chinese and the Cubans are the good guys. The American contempt for the British is startling. It’s made very clear that M takes her orders from Washington, not London. In fact from watching this movie you wouldn’t know that Britain had a government. MI6 is a provincial branch office of the CIA. Of course even in Ian Fleming’s 1950s Bond novels there’s a good deal of resentment towards the Americans and bitterness at Britain’s irrelevance in the postwar world but you don’t expect quite so much anti-Americanism in a 2002 Bond movie.

The big problem is that in this movie James Bond is no longer James Bond. The character has been watered down to the point where there’s nothing left. He’s been made safe and innocuous and inoffensive. He could be an accountant enjoying a holiday in exotic climes, or be working behind the counter at a chemist’s shop in the High Street. He doesn’t seem the least bit dangerous. You could take him home to meet your Mum. This is Bond made politically correct. And a politically correct Bond is not Bond.

Die Another Day is not in any way, shape or form a Bond movie.
Posted by dfordoom at 16:37 No comments: 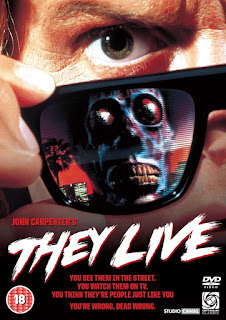 John Carpenter’s They Live came out in 1988 and it’s an odd mixture of political satire, action movie and 1950-style monster movie.

We start with an ordinary working class guy named Nada who is down on his luck. He’s desperate to get a job and he gets one, on a construction site. He also finds a place to live, in a shanty town in Los Angeles. The early part of the movie is extremely interesting. There’s a very strong sense of unease. We also get the feeling that this is not quite our world. There’s an incredible gulf between rich and poor. There’s massive unemployment and poverty and there’s homelessness on an enormous scale. The police behave more like an occupying army than a police force.

Television is everywhere. Even in the shanty town there are TV sets. TV programs focus on the lifestyles of the rich and on conspicuous and extravagant consumption. The shanty town dwellers have nothing but they watch TV shows about people who have everything.

There’s a lowly building atmosphere of unease. Something is wrong. People know that something has gone wrong but they have no idea what it is.

The unease gradually changes to outright menace. The church across the road from the shanty town is raided by the police who start shooting people and then demolish the shanty town. The police have lots of helicopters. They watch everything.

Nada was already rather curious about that church. For one thing he’s puzzled that any church would be hosting choir practice at 4 o’clock in the morning. He decides to take a look around. lt turns out that there’s no choir practice going on - that’s just a tape that’s playing. Then he finds a hidden compartment behind a wall, filled with boxes. Nada is no thief but his curiosity is not going to let him leave without taking one of the boxes with them. When he opens the box he’s disappointed that it contains nothing but sunglasses. Then he puts one of the pairs of sunglasses on and everything changes for him. And the movie changes gears dramatically. They’re not ordinary sunglasses. They allow the wearer to see reality. What everyone is seeing is not reality but a kind of hypnotically induced dream state. Reality is very different.

The advertising posters don’t actually advertise anything. They carry messages and the messages are relentless - obey, consume, keep sleeping, conform. Even worse, the people of L.A. aren’t all humans. Many are monsters, clearly aliens. The rich people are mostly aliens. The poor people are all humans. Earth has been occupied by invaders from outer space. Their intention does not appear to be to massacre us but to exploit us for profit.

Nada and Frank intend to fight back. They find a resistance group but the aliens know all about it.

Having started as a fascinating mix of science fiction and politics it becomes an action movie. Which was deliberate - Carpenter understands that if you’re going to deal with such subjects you’d be well advised to wrap it up in an entertaining package.

They Live is based on a short story by Ray Nelson, Eight o’clock in the morning.

Carpenter rather boldly cast professional wrestler Roddy Piper as his hero Nada. The casting works. Piper can't act but he looks right - he looks like a really ordinary working-class guy- and he has the right persona. And he knows how to deliver one-liners. He wrote much of his own dialogue, including some of the movie’s best lines. As is made clear in the 2013 interview with Carpenter included in the DVD he made a deliberate and conscious choice to tell the story from the point of view of the working class, and to have a hero who is very much working class.

Keith David is equally good as Frank. Meg Foster as Holly, a woman Nada is determined to save, has an odd screen presence but in a movie like this it works.

Carpenter was notorious for his absolute insistence on retaining creative control, even if it meant making low budget movies. They Live is certainly a low budget movie but Carpenter is a master at stretching a limited budget and making cheap movies that look great.

The movie was intended as a response to the 80s in general and to Reagan’s economic policies in particular. Despite this it’s a movie that doesn’t seem dated. It’s possibly more relevant today than it was in 1988. As Carpenter puts it in the accompanying interview, in many ways the 80s never ended. Consumerism and social control are arguably much bigger problems today than in 1988.

The aliens obviously represent the ruling class, interested in ordinary people solely as a source of profit. There’s nothing subtle about the satire here. It’s delivered with a sledge hammer.

Among other things They Live is famous for the epic fight scene between Nada and Frank. Piper had told Carpenter that if he wanted a really really good fight scene then it was going to need to be intricately choreographed and rehearsed. It was going to take a long time. Carpenter adjusted his shooting schedule to make sure that the time was available, and it pays off.

The influence of the classic 1956 Invasion of the Body Snatchers is obvious. That film remains the greatest of all paranoia movies but They Live is a pretty respectable paranoia flick in its own right. As far as its politics is concerned it absolutely nails its colours to the mast. It’s an interesting movie that mostly works. Highly recommended.
Posted by dfordoom at 21:20 No comments: