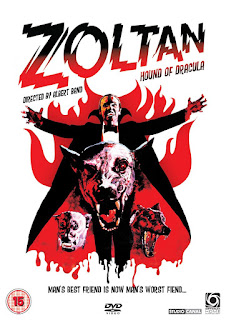 Zoltan Hound of Dracula, also known by the much less fun title Dracula’s Dog, has a reputation for being pretty bad but pretty entertaining. We shall see.

It starts with a bunch of soldiers doing some blasting. From the uniforms I’m guessing they’re Russian or at least from behind the Iron Curtain somewhere. In fact from hints dropped later in the film it’s probably Romania. Apparently they were searching for a tomb and they’ve found it. It’s the Dracula family tomb.

One of the soldiers rather unwisely decides to have a look inside one of the coffins. The corpse has a stake through it. Now I don’t know about you but the last thing I’d do is to pull the stake out (this is the Dracula family tomb after all) but that’s exactly what this soldier does. The corpse comes to life, but it’s not exactly a vampire. It’s a dog. But it’s a vampire dog. The dog disposes of the soldier and then opens another casket and uses its teeth to pull out the stake in another corpse. This corpse is delighted to be reunited with his faithful dog.

The resident vampire expert, Inspector Branco (José Ferrer), knows what this is all about. The man is Dracula’s servant Veidt Smit and he’s a fractional lamia (a fancy way of saying he’s a half-vampire, a sort of Renfield type). Half-vampires can’t survive without their vampire master so Smit is now going to set off to find the last surviving member of the Dracula family who lives in L.A. somewhere. Oddly enough Inspector Branco and the soldiers, although they dutifully burn all the vampires corpses they’ve found, don’t bother hunting down Smit and his dog. 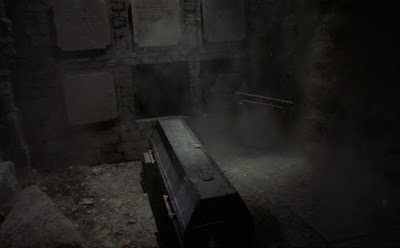 Psychologist Michael Drake and his family (wife Maria, son Steve and daughter Linda) and along with their two German Shepherd dogs are off on a camping trip. They don’t know that Michael Drake is actually Michael Dracula, last of the line of notorious vampires. They also don’t realise that they are about to be stalked by Smit and the hound Zoltan.

The camping trip goes badly for the Drake family. Things keep going wrong with dogs. Not just their dogs but other strange dogs. The Drakes are starting to get a bit scared, and then Inspector Branco turns up. He explains the family history to Michael. Veidt Smit will have to be destroyed but it will be necessary to use Michael as bait. This works a bit too well and soon Branco and Michael are besieged in a tiny cabin by Zoltan and his pack of vampire hounds. Zoltan might be a vampire but he’s still only one dog so the first thing he did was to start recruiting an army of canine vampires. There’s even a vampire puppy! 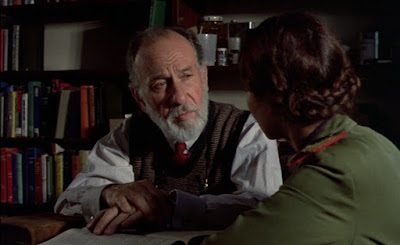 The plot doesn’t always make a great deal of sense, and Branco is not a very well equipped vampire hunter. He has a collection of sharpened stakes but that’s about it.

There’s some gore in this film. It was 1977 so that’s pretty much inevitable.

The idea of a vampiric dog is fairly dumb but at least they were smart enough to use a Doberman. Dobermans look scary at the best of times, even when they’re friendly. So with a few very simple special effects to make the eyes glow a Doberman can be made into at least a moderately convincing vampire dog, and without looking too silly. They’ve also made the fur of the vampirised dogs look slightly greyed-out, which looks quite effective.

Some of the dog attack scenes are pretty lame but others are surprisingly well done. The attack on the cabin comes close to being genuinely scary. 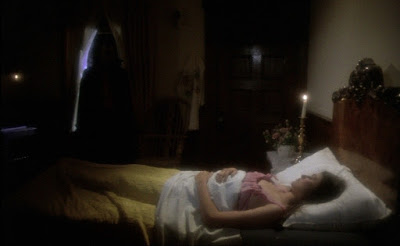 On a technical level this movie doesn’t look as ridiculous as you might expect because it wisely relies on simple tricks.

Of course you can’t get away from the fact the the whole premise of the movie is incredibly dumb. There must have been some temptation to make it a spoof but that temptation is resisted and the whole thing is taken very seriously. In some ways that makes it more enjoyably silly.

Reggie Nalder as Veidt Smit doesn’t bother to do much acting. He looks incredibly creepy and incredibly cadaverous and so he doesn’t need to do much. The rest of the cast can best be described as adequate. José Ferrer seems like he’s gritting his teeth and thinking about his pay cheque but he's a pro so his performance is OK. 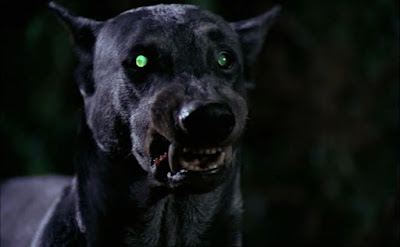 The DVD version I have is a double-header (it’s paired with Hammer’s last horror movie To the Devil…A Daughter). Zoltan Hound of Dracula gets a fairly OK anamorphic transfer, with no extras.

Zoltan Hound of Dracula might perhaps have been more successful had it been done in an overly tongue-in-cheek way, but then again that might have been just too obvious. The fact that it’s done absolutely straight is morbidly fascinating. A bit more energy would not have gone amiss.

It’s not as much fun as the goofy premise might suggest but it’s still oddly enjoyable. Worth a look if you find it in a bargain bin.
Posted by dfordoom at 23:37 1 comment: 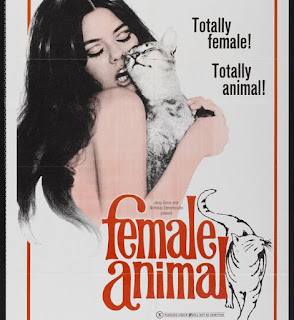 Female Animal, released in 1970, is a bit of an oddity. It seems to be an Italian-Spanish softcore co-production but it isn’t. It’s an American film produced by American exploitation legend Jerry Gross. It’s one of the handful of films Gross directed himself. The credits will tell you that the movie was produced by Antonio Benvenuti and directed by Juan Carlo Grinella but it was definitely produced and directed by Gross. It was shot in New York City and on location in Puerto Rico.

The movie stars Arlene Tiger as sultry Mediterranean beauty Angelique, only Arlene Tiger was actually Arlene Sue Farber and she hailed from New York City. Pretty much everything in the credits is a lie.

Female Animal supposedly takes place on an island although I’m pretty sure the name of the island is never mentioned. It does try for a vaguely Mediterranean atmosphere, which gets intriguingly mixed up with an American sexploitation atmosphere.

Angelique is a poor peasant girl who lives with her very disapproving aunt. One day Angelique has some bad luck. She is riding her bicycle when she is almost run over by a big car. But it’s really good luck because she’s not hurt and the car belongs to the fabulously wealthy Count Medici and the count not only buys her a new bicycle he offers her a job in his palatial house. Or maybe it’s not good luck after all. The Count does make one condition. She must stay away from his ne’er do well son Alain.

Of course Angelique doesn’t listen. She never does.

The acting is mostly passable. Arlene Farber is actually very good. The most important thing she has to do is to make Angelique seem rather innocent and at the same time slightly cynical and more experienced than such a girl should be. She does this extremely well. Angelique is too calculating to be a conventional good girl heroine but not calculating enough to be a conventional bad girl. She thinks she knows what she’s doing and she does, up to a point. Beyond that point she is dangerously out of her depth.

Farber also looks extremely beautiful. Oh, and she takes her clothes off as well.

Angelique is not the only one to get out of her depth. The tense adversarial relationship between the Count and his spoilt rich son is getting badly out of hand and now they have something new to add fuel to the flames. They both want Angelique. It’s not just a romantic triangle since - the Count’s mistress adds further perilous complications.

Female Animal has some of the feel you associate with the sex psycho-melodramas that Joe Sarno was making at that time. And some of Sarno’s films of the late 60s were shot in Europe so it’s not unlikely that they were the reason Female Animal was made as a fake-European film. Given the huge success of Sarno’s 1968 Swedish-shot Inga it actually starts to sound like a plausible theory. The main difference is that Sarno was better at both the sex and the melodrama. Female Animal was also inspired by the 1968 Swedish Fanny Hill, also a big money-spinner.

The pacing is a problem. The plot is very straightforward but it needs to be moved along more quickly. Gross doesn’t quite succeed in building enough of a feeling of imminent catastrophe to keep the viewer interested.

The scene in the casino with The Count and his son as the players and Angelique as the stake is quite effective although it’s not quite clear why the usually ruthless control freak Count is suddenly showing such recklessness and poor judgment.

At this point you’re probably getting worried because I haven’t told you if this movie contains any go-go dancing. You can rest easy on that score. There is indeed go-go dancing. In fact Angelique herself does some of it.

Female Animal doesn’t quite make it. Despite the heroic efforts of Arlene Farber it fails to ignite. Worth a look if you’re an Arlene Farber completist, if such a thing exists.
Posted by dfordoom at 00:12 No comments: