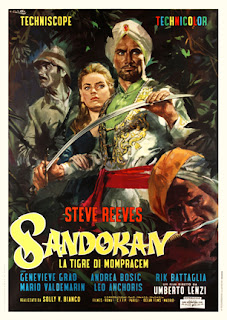 Sandokan the Great is a rollicking and rather stylish adventure tale of pirates but with a number of features that make it quite different from the usual run of pirates movies. Firstly the action takes place in the South China Sea and the jungles of Borneo, a long long way from the Spanish Main. And secondly, the British are very much the bad guys.

This 1963 Italian/French/Spanish co-production was directed by Umberto Lenzi and was based on the first of the Sandokan novels, The Tigers of Mompracem, by 19th century Italian writer Emilio Salgari.

Steve Reeves stars as the brave and daring Malay pirate Sandokan. With Reeves as the star you might be expecting this to be a kind of peplum but with a 19th century setting and perhaps that’s not all that far from the mark.

The plot of the movie is only loosely based on the novel but it captures the spirit quite effectively. Sandokan’s father is the rajah of a small principality in Borneo but he has been deposed by the British who intend to execute him. Sandokan has no intention of allowing them to get away with that sort of thing and if stopping them means taking on the might of the British Empire then that’s how it’s going to be.

Sandokan’s first move is a raid on the fortified house of the British commander at Fort VIctoria, Lord Guillonk. He kidnaps Lord Guillonk’s niece Mary Ann. She is outraged by the thought of being kidnapped by pirates. On the other hand Sandokan is very handsome and very dashing and pirates are kinda sexy so maybe being kidnapped isn’t quite so bad as it seemed at first.

Sandokan’s right-hand man, the Portuguese adventurer Yanez (Andrea Bosic), also points out to her (quite correctly) that given the nature of British colonial policy the British are in no position to complain about the ethics of piracy. And since they did murder most of Sandokan’s family it’s perhaps not surprising that Sandokan is not a fan of the British. Yanez also points out that Sandokan’s followers have been forced into piracy by the policies of the European colonial powers. This little scene is important because Sandokan is the hero of the film and we need to know that he is one of the good guys.

Sandokan is now being hunted by Lord Guillonk’s men and he sets off to cross the island, which means braving unexplored swamps and jungles, a challenging enough feat but even more difficult with Mary Ann in tow and with Yanez not fully recovered from a bullet wound.

The Sandokan of the novel is an inspiring and charismatic leader but also impulsive and inclined to errors of judgment. He’s a lot more mercurial than his film counterpart. Steve Reeves has decided instead to go for dignity and quiet authority. It’s a perfectly valid approach and his performance is more than adequate. In fact it’s pretty good. There are some hints of Sandokan’s chronic over-confidence - his plan to cross the island in the face of impassable swamps and headhunters was not a terrifically great idea. Sandokan’s men have absolute confidence in him but that doesn’t necessarily mean that he always knows what he’s doing.

Although this is a pirate movie there are no sea battles. Presumably the budget wasn’t sufficient to contemplate anything so ambitious. The main problem is that the pacing drags a bit in the middle. On the other hand when the action starts to pick up towards the end it’s worth the wait. The final battle scenes are quite spectacular.

What is particularly impressive is the way the fortunes of war keep swinging wildly back and forth in the last portion of the film. Every time things are looking up for Sandokan it all falls apart again and then just when it’s obviously entirely hopeless his uncanny luck kicks in and he’s back on top again. It’s all suitably nail-biting but it’s more than that. While by this stage the movie has long since abandoned the plot of the novel these outrageous swings of fortune are totally consistent with the Sandokan of the novel. There is nothing rational or calculating about him - he’s a man who is always prepared to put his faith in fate. If God wills it he will survive and keep fighting. His absolute fatalism makes him a fascinatingly non-European style of hero.

Director Umberto Lenzi tried his hand at just about every low-budget genre at some stage (and he would return to jungle settings in controversial fashion with his cannibal movies  later in his career). He does a solid if not overly inspiring job here. The location shooting in Sri Lanka is impressive. It gives the movie an authentically exotic feel.

The danger with the anti-colonialist message (which is there in Salgari’s novel as well) is the very real danger of succumbing to excessive preachiness. That’s something I always intensely dislike in any film, whether I agree with the message or not. I don’t find it to be a problem here, possibly because the British are depicted as over-the-top melodrama villains.

While most of the plot points are clear enough it probably is an advantage if you’re familiar with the books. Salgari was, and to some extent still is, extremely popular on the Continent and there had been several earlier movies based on his books so the screenwriters probably assumed that most European viewers would have some acquaintance with Sandokan.

The Warner Archive DVD-R offers an extremely nice anamorphic transfer and that’s important because this movie, shot in Technicolor and in the Cinemascope aspect ratio, relies a great deal on the gorgeous location photography.

Sandokan the Great has some major things in its favour, namely the unusual and exotic setting and the even more unusual and exotic hero. These things, along with the bravura extended action finale, are enough to compensate for a few minor problems of pacing and coherence. On the whole this is an enjoyable adventure flick. Highly recommended.
Posted by dfordoom at 17:27 No comments:

Time Travelers is pretty unusual - you don't get many collaborations between Irwin Allen and Rod Serling. It’s a TV-movie that was actually made in 1976 as a pilot for a projected Irwin Allen television series that never eventuated.

What's most surprising about this production is that it's actually quite a decent (and even moderately intelligent) science fiction movie.

Here's the link to my review on Cult TV Lounge.
Posted by dfordoom at 22:34 No comments: