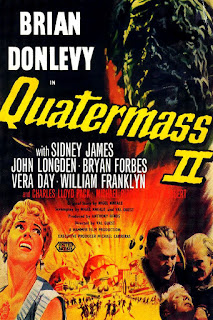 Hammer had spent the early 1950s making a large number of reasonable enjoyable B-movies. These were mostly crime movies but they included a few science fiction films. All of these films were very low-budget productions. The big change in Hammer’s fortunes came with The Quatermass Xperiment in 1955. This was Hammer’s first genuine box office hit. The formula was perfect for the times, combining science fiction and horror. Quatermass II followed in 1957 and Hammer were now a force to be reckoned with.

Both Quatermass films were adapted from BBC television serials.

Professor Quatermass (Brian Donlevy) is head of the ambitious British rocket program. Their objective is not merely to launch a rocket into space but to send dozens of rockets to the Moon and to establish a permanent base there. He has constructed a scale model of the proposed base. Unfortunately he faces two major obstacles. The first is that his rocket’s atomic engine is disastrously unstable. That can of course be rectified in time. The second problem is more serious - the government does not want to give him the money to make his scientific dream into a reality.

Quatermass is therefore understandably under considerable stress. He does not need another drama to cope with but he’s stumbled onto something that could be a drama of literally cosmic dimensions. 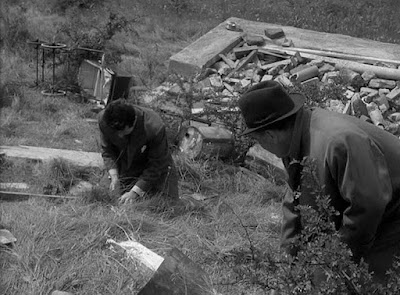 It starts when he almost has a collision with a car. The passenger in the other car is suffering from some strange burns which he apparently got from handling some rocks. The story doesn’t make much sense but Quatermass does take some samples. When he gets back to his project headquarters he finds that his chief subordinate has been tracking some strange objects that are falling out of the heavens. They don’t behave like meteorites and their nature is a complete mystery. They appear to be coming to earth in the same area in which Quatermass had his near-collision with that other car.

Quatermass, being a scientist, is naturally very curious and decides to have a closer look at the area. What he and his assistant find is both extraordinary and shocking - it’s Professor Quatermass’s proposed lunar colony, complete with gigantic metal domes, sitting in the English countryside. 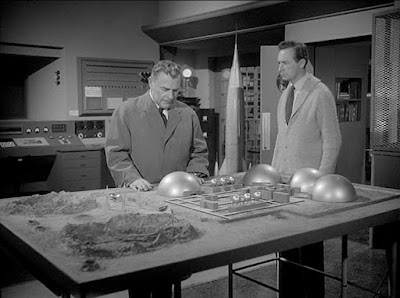 Quatermass is now not only intrigued but worried. The whole area is sealed off with armed guards and all his enquiries on the subject of the base run into brick walls. Quatermass is starting to suspect that there’s something sinister going on but even though he has top-level connections in Whitehall he just keeps running into those brick walls. Quatermass is however not your usual polite self-effacing British boffin - he’s a fast-talking American and when he’s set on something he goes at it like a bulldozer. The more obstacles he encounters the more determined he gets.

There’s more than a hint of paranoia to this story. The atmosphere is somewhat reminiscent of The Invasion of the Body Snatchers (which had been released a year earlier). There’s also a bit of an X-Files feel with suggestions of government cover-ups and conspiracies. 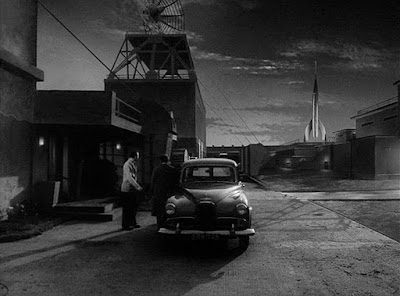 Not everyone likes Brian Donlevy as Quatermass but I think he does a great job. He plays him as the kind of cantankerous single-minded totally obsessive visionary who gets things done because he never takes no for an answer. He’s bad-tempered and often rude but he’s aware of his faults and on occasions even apologises for them. He’s a hero who commands respect and you can’t help developing a certain affection for him.

Look out for Hammer favourite Michael Ripper - and yes he plays an innkeeper! There’s also Sid James as a drunken but courageous newspaper reporter.

The special effects are not particularly elaborate but this is a story that relies on atmosphere and suspense rather than special effects. The lunar colony scenes were obviously shot at a chemical plant but they work. On the whole it’s a movie that achieves the necessary visual impact without spending a huge amount of money. 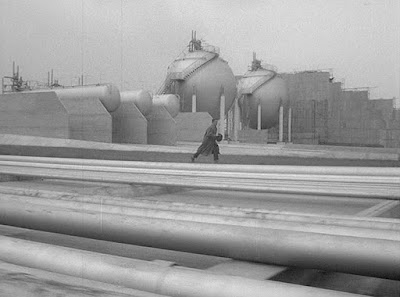 Val Guest was always a competent director and he gives this film the right sense of both urgency and menace.

Both the 1950s Hammer Quatermass movies were shot in black-and-white. Hammer were not yet in a position to be able to afford the risk of incurring the costs of filming in colour but the success of the Quatermass films would change that. I think the black-and-white cinematography is quite effective and meshes well with the rather stark production design.

Quatermass II provides some thrills and some chills, a great deal of action and plenty of old-fashioned entertainment. Highly recommended.
Posted by dfordoom at 20:07 4 comments: