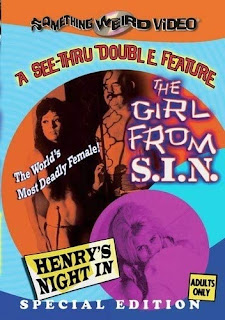 The Girl from S.I.N. is classic American sexploitation from the greatest era of that genre, the early to mid-60s. This one in fact dates from 1966.

The leader of the diabolical spy agency known as S.I.N., the evil Doctor Sexus, wants to get hold of Professor Drake’s latest top-secret invention. Professor Drake is working on an invisibility drug. When S.I.N.’s heavies descend upon his laboratory his beautiful assistant Karen overhears from the next room. She realises that the only way to help the unfortunate scientist is to use the invisibility pills herself. Quickly stripping off her clothes she takes one of the pills and is able to temporarily foil S.I.N.’s plans.

Now S.I.N. has put their top operative, Poontang Plenty (Secret Agent 0069), on the case. She has never failed to get results, sometimes by unconventional means as we see in the pre-credits sequence where she distracts her victim by pouring champagne on his toes and sucking them.

Meanwhile Karen has taken refuge in the photographer’s studio next door to professor Drake’s laboratory. Sam, the photographer, has just completed a nude photo shoot. Since Karen is beautiful and naked she soon gets Sam’s attention. He is anxious to help. 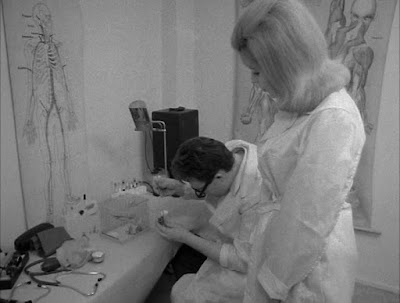 Unfortunately Karen’s brave efforts lead to her capture by S.I.N. and she is put to the torture by steam bath. Will S.I.N. get the invisibility formula? Will the lustful Poontang add another victim to her score? You’ll have to watch the movie to see the exciting conclusion folks.

One of the many joys of these 60s sexploitation films is the amusing ways they manage to use their plots to justify the nudity. To use the invisibility pills Karen must first take all her clothes off. And (a very convenient plot point this one) the effect of the invisibility pills is only temporary so Karen keeps re-appearing, stark naked. 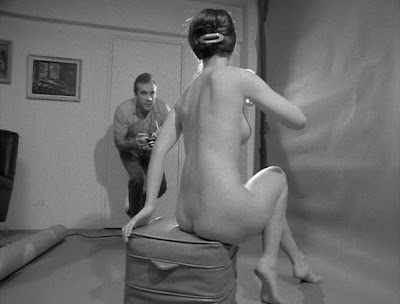 Like many of this genre this film was so low-budget they didn’t even have synchronised sound. There were two ways in which the sexploitation film-makers could overcome this difficulty. The first way was the Doris Wishman approach - always have the actors facing away from the camera when they’re supposed to be speaking their dialogue. The second method was that taken here - using a voiceover narration to compensate for there being no dialogue at all. It is in effect a silent film which adds to its charm and its oddness.

Oddness and exuberant craziness are of course major ingredients in the best 60s sexploitation features and The Girl from S.I.N. has its share of both. It’s a silly but engaging spy spoof with lots of naked flesh. 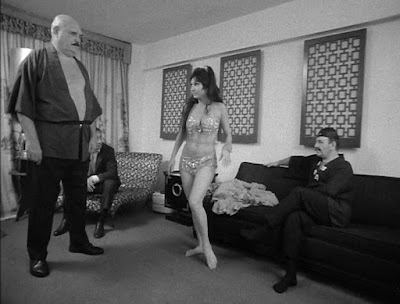 Being 1966 you’re going to see any frontal nudity or explicit sex scenes but there’s still a great deal of nudity. Mary O’Hara is naked for most of her screen time, and she’s in most of the movie. June Roberts as Sam’s model is nude for all of her screen time. Joyana as Agent 0069 shows us very little flesh but she makes up for it with her enthusiasm and kinkiness.

There are many familiar faces here for fans of sexploitation movies. Sam Stewart who plays the photographer was in many of Doris Wishman’s weird and wonderful movies. The acting isn’t exactly good but it suits the material. Joyana certainly gives the part of Poontang Plenty everything she’s got. 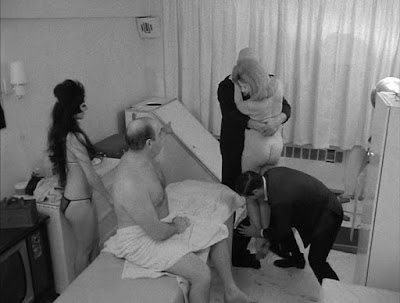 The Girl from S.I.N. was directed by C. Davis Smith, Wishman’s regular cinematographer. He does a creditable job and the result is a movie that is great fun. Treat it as a sexploitation movie or a spy spoof - either way it’s highly entertaining in an engagingly silly way.

Something Weird have as usual managed to get hold of a very decent print and picture quality is generally good with very few signs of print damage. It’s paired as a double-feature with Henry’s Night In. Highly recommended.
Posted by dfordoom at 14:47