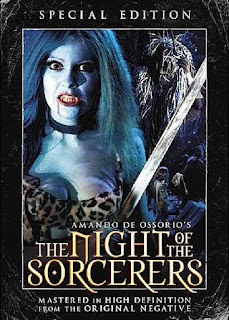 Amando de Ossorio is known among horror fans mostly for his Blind Dead cycle. Which is a pity, since he made some other ridiculously entertaining movies such as The Loreley’s Grasp and this one, The Night of the Sorcerers (La noche de los brujos).

This Spanish production dates from 1973, right slap bang in the golden age of Spanish horror.

The pre-credits sequence takes us back to 1910, in Bumbasa, deep in Darkest Africa. A missionary’s is about to be sacrificed to the voodoo gods. We then jump forward to the 1970s when a small expedition arrives in Bumbasa. They are there to collect material for an article on disappearing African wildlife.

They meet a European trader who warns them that this is a dangerous locality. Voodoo is still practised, and nearby is the spot where the sorcerers used to make their sacrifices to the voodoo gods. But when do characters in a horror movie ever listen to warnings? 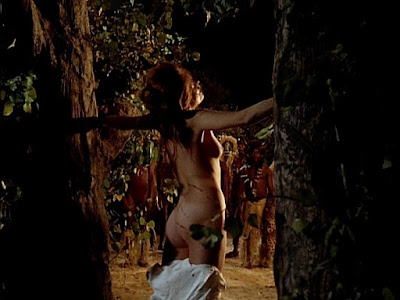 The expedition comprises two men, big game hunter Rod Carter and Professor Grant, an expert in African wildlife, plus three women. One of the women is Rod’s girlfriend, one is a photographer and the third is the daughter of the man who financed the expedition. Pretty soon they start hearing drums in the night. The photographer figures this would be a good opportunity to get some photos. Since they’ve been warned about the dangers in the area she naturally decides the wisest thing to do is to wander off into the jungle on her own. She will soon pay the price for her rashness. She won’t be the last victim of the zombie sorcerers!

The long-dead sorcerers are still making their regular sacrifices. The sacrifice is a woman, who after her death becomes an immortal leopard woman. 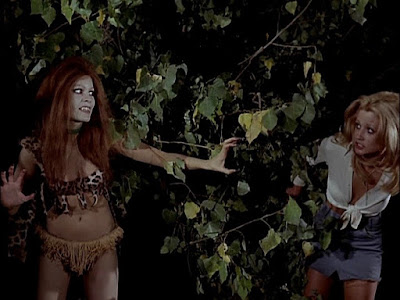 Early on one of the characters talks about voodoo, zombies and magic. And yes, this movie has all three! It also has sex, sleaze and sadism. And leopard-print bikinis (with rather fetching matching leopard-print capes). And who’s that driving the first Land-Rover of the expedition in the movie’s first post-credits sequence? It’s Jack Taylor! With Jack Taylor’s presence this movie leaves not a single eurosleaze box unticked.

Amando de Ossorio has a knack for coming up with impressive visual set-pieces on limited budgets. That’s really what low-budget film-making is all about - finding ways to express your visual flair whilst spending very little money. This movie has several such sequences. 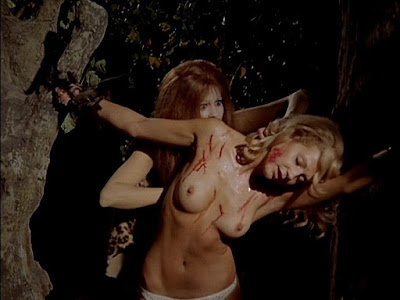 Of course by the standards of conventional film criticism this is a bad movie, albeit one with plenty of camp appeal. But it has to be judged by what it sets out to achieve - a mix of sleaze and horror done with a certain amount of style. Judged by those standards, it’s a complete success.

It’s also vastly entertaining. It has all the right ingredients and de Ossorio combines them with considerable skill. We’re not meant to take any of it very seriously. It’s a thoroughly enjoyable exploitation movie and it has all the exploitation elements in very large quantities. There’s quite a bit of gore, there’s plenty of nudity, and it’s very sleazy in a lightweight but fun way. 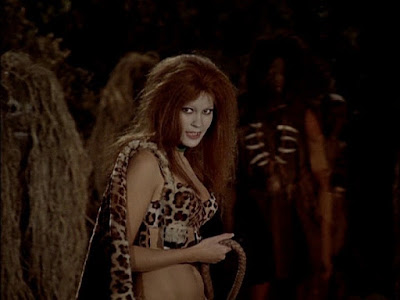 Writer-director de Ossorio keeps the action moving along at a brisk pace. He creates a suitable sinister atmosphere, and as with the visual set-pieces he does it cheaply and economically with drums and fog effects and simple makeup effects. Everything is done on the cheap but the results are impressive enough. The acting is basic but it gets the job done.

What it all adds up is non-stop entertainment. While it’s not quite as good as The Loreley’s Grasp it’s just as much fun. If you take your horror movies very seriously give this one a miss. If you’re content to just sit back and wallow in gloriously trashy eurosleaze then this one is a must-see. I recommend it very highly.
Posted by dfordoom at 11:33

Fun flick. In fact while I agree with you that "The Loreley’s Grasp" is the better movie. I enjoyed "The Night of the Sorcerers" a lot more.