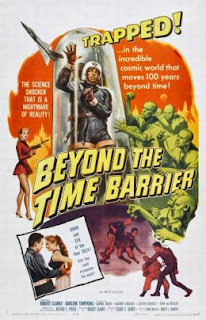 Beyond the Time Barrier is one of Edgar G.Ulmer’s late science fiction films, made by a small independent production company. Like a number of his later movies it has not received an official DVD release although it can be obtained as a grey market release.

The United States Air Force is conducing research into space travel using the experimental X-80 aircraft. This uses a conventional turbojet engine to reach a very high altitude at supersonic speeds at which point a powerful rocket motor takes over to propel the aircraft to an altitude of 500,000 feet at a speed in excess of 5,000 miles per hour. This will enable a sub-orbital mission to be undertaken. The X-80 will in effect reach outer space. This research will pave the way for true orbital lights.

The X-80 actually looks exactly like a stock standard example of the US Air Force’s then current front-line interceptor fighter, the Convair F-102 Delta Dagger, which enables the movie to use lots of stock footage. This is of course a very handy way to get plenty of good aerial shots of the X-80 without spending any money! Luckily the F-102 had a very high-tech look for its day. In one or two shots an F-106 Delta Dart is used instead but the two aircraft look so similar that only aviation geeks will notice.

Test pilot Major William Allison (Robert Clarke) is to fly the first mission. All goes well until the X-80 suddenly disappears from the radar screens and radio contact is lost. Major Allison is not aware of any problems and lands successfully after completing his sub-orbital flight but what he finds on the ground is enough to make him question his sanity. The Air Force base from which he took off less than an hour earlier is now in ruins. Even more disturbingly, it looks like it has been in ruins for years. At first he can find no signs of life but eventually he is captured and taken to an underground citadel. No-one there will believe his story. His claims to have taken off a short while ago from the ands Air Force Base in the year 1960 are greeted with suspicion and even outright disbelief. He soon discovers why. He is indeed on Earth, but it is now the year 2024! 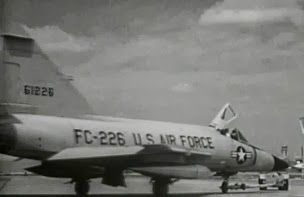 The explanation for his predicament will come later in a delightful piece of sci-fi technobabble. Travelling at close to the speed of light can cause all kinds of strange things to happen to time. Major Allison had only been travelling at a few thousand miles per hour but when you add the speed at which the Earth is rotating, the speed at which the planet is orbiting the sub and the speed at which our solar system is travelling through the Milky way then the few thousand miles of airspeed of the X-80 was enough to take Major Allison close to the speed of light! As a result he has not only broken the sound barrier, he has broken the time barrier!

The world of 2024 is not a happy place. A great plague had swept across our planet destroying civilisation as we know it. The movie avoids the expected clichéd explanation that this had been caused by a nuclear war but in typical 1950s apocalyptic sci-fi style it’s still all our fault. The plague was caused the destruction by nuclear testing of the Earth’s protective barrier against cosmic rays. The cosmic rays then caused devastating mutations. The people in the underground citadel appear normal buy they are in fact first-stage mutants. Most are sterile, and many have developed telepathic powers. This is a doomed civilisation, with no child having been born for twenty years. 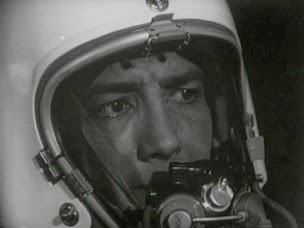 There are a handful of people in the city who have escaped the plague. They also arrived in 2024 by breaking the time barrier. They are led by General Karl Kruse (Stephen Bekassy). There is immense hostility and mistrust between this handful of people and the doomed survivors of the plague. The survivors do have one hope left however. The young Princess Trirene appears to be fertile.

The plague survivors and the group led by Karl Kruse have their own plans for making use of Major Allison. Allison is uncertain if he can trust either group but the fact that the X-80 is still intact gives him hope that he may be able to return to 1960. He may also be able to save civilisation. 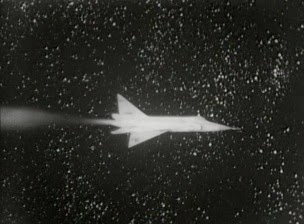 Despite the technobabble it’s a reasonably interesting idea. Doomed civilisations were a major obsession in American sci-fi movies from the 50s right through to the 70s. Arthur G. Pierce’s screenplay sets up some interesting conflicts and he provides an array of characters who are motivated by mixtures of selfishness, idealism, resentment and fear.

It’s a moderately ambitious movie. Its ambitions are hampered by its low budget but as is the case with so much good 1950s cinematic sci-fi the film-makers are not dismayed by their budgetary constraints. Ulmer was never dismayed by a low budget. The movie looks reasonably good considering the incredibly limited resources Ulmer had to work with. There’s extensive use of matte paintings but that’s not something that has never bothered me; in fact it gives sci-fi movies of this era a nice other-worldly feel. The legendary Jack P. Pierce did the makeup effects. 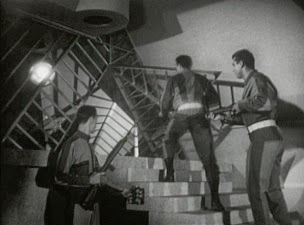 The acting is adequate. Vladimir Sokoloff as the Supreme, the leader of the semi-mutant survivors, is a sympathetic character - he’s a good man faced by difficult choices. Boyd “Red” Morgan make a good villain, all the more effective in that he is not so much a villain as a ruthless man who believes his ruthlessness is necessary. Robert Clarke is a bit flat as Major Allison. Darlene Tompkins is reasonably good, giving Princess Trirene the necessary mysterious quality.

Sinister Cinema’s DVD-R provides a perfectly watchable fullframe image (which is quite correct since the movie was shot in black-and-white in a 1.37:1 aspect ratio) and given that this is an intriguing movie by an interesting director with a major cult following we can be grateful to them for at least making thus movie available, even in a slightly imperfect form.

Fans of 1950s will certainly want to give Beyond the Time Barrier a look and Sinister Cinema’s DVD-R is acceptable enough to make this a worthwhile purchase. Highly recommended.
Posted by dfordoom at 23:29