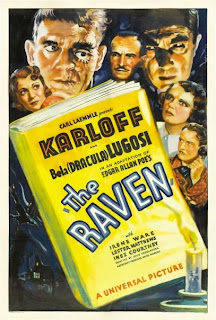 The Raven is one of the lesser known Universal horror movies of the 30s and it’s a bit of a neglected gem. This 1935 production was one of the several occasions on which Bela Lugosi and Boris Karloff were paired and it gives both actors a chance to shine, although it’s Lugosi who dominates and effortlessly walks off with the acting honours.

Supposed adaptations of Edgar Allan Poe’s works generally have little actual Poe in them and this movie is no exception. Poe is however a influence on one of the major characters so I guess Universal felt they were entitled to claim it as a Poe adaptation.

Jean Thatcher (Irene Ware) is gravely injured in an automobile accident. The doctors fear that little can be done to save her. Her one chance would be if Dr Vollin could somehow be persuaded to take on her case.

Dr Richard Vollin (Bela Lugosi) is a great surgeon now retired from practice and devoting himself to his obsession with Edgar Allan Poe. With great difficulty Judge Thatcher, Jean’s father, persuades Vollin to save his daughter. Jean is soon fully recovered. She is seeing quite a bit of Dr Vollin. He’s a rather fascinating man and he did save her life and it doesn’t occur to Jean that seeing so much of him might not be entirely appropriate. Her motives seem innocent enough. She is intrigued by his devotion to Poe and even choreographs a dance routine inspired by Poe (she is a professional dancer). Her dance routine is actually a key scene (and is quite effective), marking the point at which Vollin’s fantasies take over from reality in his mind. 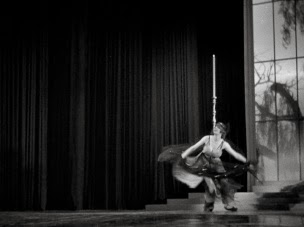 Vollin seems to relate Poe’s obsession with the lost Lenore in his poems to some event in his own life. In any case he has clearly started to see Jean as some kind of embodiment of Poe’s Lenore. Vollin has no intention of giving her up and then fate offers him a means of overcoming her father’s objections, in a permanent and fatal way. As we will discover Dr Vollin likes permanent and fatal solutions, especially if they’re slow and painful. An escaped killer, Edward Bateman (Boris Karloff), shows up on his doorstep. He believes that his life of violence and crime is a result of his ugliness. He has been told that Dr Vollin has the skill to alter a person’s face, to make an ugly person attractive. This is what he wishes Vollin to do for him. But Vollin has his own plans for Bateman.

This is one Karloff-Lugosi pairing in which Lugosi gets a role just as meaty, and in fact in this case much more so, as Karloff’s. Dr Vollin is of course a dangerous madman but he’s a cultured and sophisticated madman as well. This is the kind of part Lugosi relished and he makes the most of it. Karloff got top billing and was paid twice as much as Lugosi for this film. While this shameful treatment by Universal must have rankled at least this time Lugosi could console himself with the knowledge that he’d landed the plum role, and the biggest role as well. 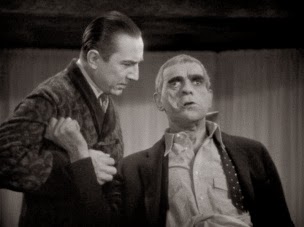 Karloff is overshadowed but he is not entirely left out in the cold. Bateman is as mad and as dangerous as Vollin but he’s a somewhat tragic figure. Tragic monsters were meat and drink to Karloff and as always he extracts just the right amount of pathos without veering into excessive sentimentality or self-parody. The problem is that Karloff never could play American mobsters convincingly. Initially he seems ill at ease and seriously miscast but once Vollin transforms Bateman into a monster the problem becomes relatively unimportant. Karloff couldn’t play American mobsters but he could certainly play monsters.

This movie is also a joy to fans of the two great horror icons because not only are they both present, they have plenty of scenes together. The manipulative and grotesque relationship between these two very different madmen is the key to the film and it plays out quite effectively. 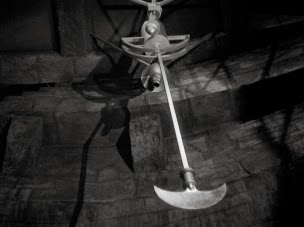 Irene Ware gets to do a great deal of screaming. She’s perfectly adequate in her role. A weekend house party hosted by Dr Vollin, a party that will end as the kind of party Poe would have imagined in his nightmares, gives an array of character actors the opportunity to practise their over-acting skills. They’re there to provide the totally unnecessary and inappropriate comic relief. Fortunately screenplay David Boehm and director Lew Landers (billed under his original name Louis Friedlander) keep the focus on Lugosi and Karloff as much as possible.

One of the great strengths of Universal’s horror movies of this era was the studio’s ability to provide such movies with exactly the right kind of sets and to make them convincing and interesting. The Raven doesn’t boast the glorious visual excesses of The Black Cat or even Son of Frankenstein but it still looks great and Dr Vollin’s Poe-inspired chamber of tortures should be enough to keep fans happy. The Pit and the Pendulum device is a particular highlight.

Lew Landers was a competent journeyman director. His most valuable contribution to this film is that he keeps things moving along at a very brisk pace. 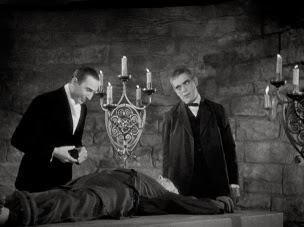 This movie had popped up on DVD before but the transfer on the disc included in their Bela Lugosi Collection is a significant improvement. There’s some grain but if anything it adds to the atmosphere. More importantly the contrast is excellent. Sound is very good as well and overall Universal have done a fine job. The set itself (comprising five movies on a doubled-sided DVD) is an absolute must-have for any self-respecting fan of these two great horror actors or of the Universal horror movies in general.

This movie’s biggest problem has always been that it was a Poe adaptation that appeared a year after an earlier Universal Poe movie, The Black Cat, a movie that was in every way bigger, more ambitious, more spectacular and more successful (and was a box-office smash hit). In fact The Black Cat is one of the all-time great horror movies. The Raven can’t compete with that. What you need to do is to to forget the comparisons. The Raven is a much more modest effort but it’s great fun and it features one of Lugosi’s most enjoyably outrageous performances. Highly recommended.
Posted by dfordoom at 22:46

Perfect review. Couldn't agree more. After this film,the Karloff/Lugosi films had more sc-fi elements than horror and are not as fun. I read recently that the British govt. did not want horror fims in their cinema between 36-39 and Hollywood more or less acquiesced to their demands due to the coming war.

"I read recently that the British govt. did not want horror fims in their cinema between 36-39 and Hollywood more or less acquiesced to their demands due to the coming war."

Censorship in Britain was in some ways much stricter than Hollywood's Production Code, and they were particularly strict on violence. So strict that making horror films in Britain was quite a challenge. Even in the 1950s Hammer had huge problems with the British censor.