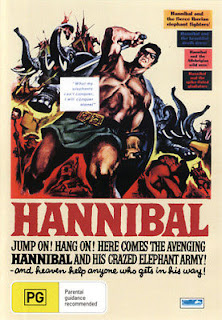 Hannibal was one of the last movies in the strange but fascinating career of Edgar G. Ulmer, a director who achieved very little success during his lifetime but who since his death has accumulated a considerable and very loyal cult following.

By the late 50s it seemed that Ulmer was permanently trapped in ultra-cheap B-movie territory so Hannibal comes as something of a surprise - it’s a fairly lavish costume epic with no less than 12,000 extras in the battle scenes! It’s an Italian production shot in Italy and Yugoslavia but part-financed and released by Warner Brothers. It’s by far the most large-scale movie Ulmer ever made. It must have been quite an experience for Ulmer having a budget of around $5 million to play with! That’s possibly more than all his other films put together.

The movie opens with the great Carthaginian general Hannibal’s epic crossing of the Alps in 218 BC with his army, complete with the  famous elephants. It also establishes the idea of Hannibal being a rather complex character - he doesn’t hate Rome but he is determined, in his own words, never to bend the knee to the Romans. It also establishes the idea that Hannibal’s invasion is to some extent a defensive response to Roman aggression. Hannibal is to be the hero so obviously he has to be made fairly sympathetic.

The Alps having been successfully crossed the movie then veers in two separate directions, focusing on Hannibal’s extraordinary victories over the Romans at Trebia, Lake Trasimene and Cannae but also focusing on a rather melodramatic romantic sub-plot involving Hannibal’s love for the niece of the Roman senator Fabius Maximus. This sub-plot does serve some purpose, reinforcing the notion of Hannibal as a sometimes quixotic romantic hero, although it drags a little. The crossing of the Alps is the highlight of the picture, with Ulmer managing (with a mix of location and sound stage shooting) to convey the extraordinary difficulties and dangers involved.

The battle scenes may infuriate history buffs - the Roman and Carthaginian armies were in reality disciplined armies that fought in regular formations rather than straggling mobs of barbarians involved in a massive pub brawl. On the other hand these battle scenes do have a certain vitality and Ulmer does make an effort to show us that Cannae was a battle won by superior generalship and tactics rather than mere courage. Ulmer apparently used no less than six cameras to shot these scenes, with the Cannae sequences being shot on the Yugoslav Army’s artillery proving range.

The human elements introduced into the story are hampered by some rather poor acting from most of the supporting cast. Gabriele Ferzetti isn’t too bad as Fabius, making a real effort to portray him as a man of iron determination, cool judgment and remorseless will. Rita Gam as Hannibal’s Roman love interest Sylvia seems rather unsure of herself.

There’s no problem however with Victor Mature as Hannibal. He’s obviously having a wonderful time. He plays the part with a twinkle in his eye (I say eye rather than eyes because for most of the movie he sports a rather piratical eye-patch on one eye). Mature’s approach actually works very well, helping to humanise the character. Mature was a very underrated actor and even when overacting he is able to convey the impression that Hannibal is man of unexpected depths, capable of unpredictable moments of generosity and compassion.

In accordance with standard Italian practice the dialogue was undoubtedly dubbed in during post-production. Fortunately we get to hear Mature’s real voice, a major bonus since he delivers even potentially embarrassing lines with zest and panache.

More interesting than the film itself is one of the extras - an audio interview with Ulmer conducted by Peter Bogdanovich. Ulmer’s stories of his early career are fascinating but he also talks about making Hannibal. Ulmer wanted to make the movie a human drama rather than a mere spectacle and eventually came up with an idea of how to do this. His idea would also explain the mystery that has puzzled historians for two thousand years - when Hannibal had Rome at his mercy after the Battle of Cannae why didn’t he complete his victory by marching on the virtually undefended city and conquer it? Ulmer’s imaginative solution was to portray Hannibal as a man who knows that he represents a dying civilisation while Rome represents the future. When he finds himself in a position to destroy Rome he can’t bring himself to do it because it would mean destroying the future. Whether this idea had any basis in historical fact is more than dubious but in filmic terms it was a great idea and would have given the picture a tragic dimension as well as giving Hannibal real psychological complexity. Tragically the studio vetoed the whole idea, much to Ulmer’s disgust, and those scenes were never shot.

VIC have done a very decent job with their DVD release. The movie was shot in Cinemascope and colour and the transfer is anamorphic. The print used is in fairly good condition. It’s just a little dark in places but on the whole it’s quite vibrant and there’s no noticeable print damage.

Had Ulmer been allowed to make the picture his way Hannibal could have been one of the great epics. As it stands it’s still an interesting and slightly unusual costume film. Ulmer adds a few nice touches and Victor Mature’s performance is enough on its own to make this worth watching. Recommended.
Posted by dfordoom at 02:43

No idea it was a historical mystery. Rome was garrisoned by an Army of 30,0000 men behind one of the most impressive fortified walls in the world and Hannibal had no siege train. Look at Syracuse; its took the Romans 4 years to reduce that by siege. With Hannibal's comparatively negligible strategic resources he would have had no chance of reducing Rome.