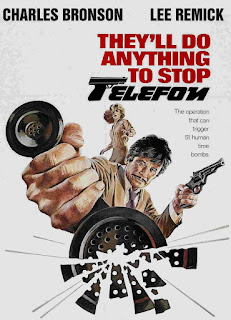 Telefon, released in 1977, is a slightly unusual Cold War spy flick. A rogue agent is triggering a series of attacks against US military installations. There’s only one man who can stop this rogue agent and thus prevent World War III and that’s Major Grigori Borzov of the KGB. The odds are against him but the KGB are determined that somehow war must be avoided. That’s right, this is an American Cold War spy film in which the Soviets are the good guys. The CIA doesn’t really know what’s going on but they’re also determined to stop these attacks. They’re also the good guys. This is very much a Détente spy film, with both the KGB and the CIA working towards the same goal, although completely independently and with the CIA having no idea that the KGB is on their side.

To make this even more fun Major Borzov is played by legendary tough guy Charles Bronson.

The situation comes about because of a top-secret Soviet plan code-named Telefon dating back to the days when Cold War tensions were at their height. Fifty-two Soviet agents were sent to the US under deep cover, sleepers to be activated only in a dire emergency. These sleeper agents were subjected to drug-assisted hypnosis - they’re under such deep cover that they don’t even know they’re agents until they’re activated.

The plan has long since been forgotten, the paperwork buried away in the KBG archives. Tensions have now eased dramatically, Détente is working successfully, nuclear war now seems a remote possibility and the last thing the KGB wants is anything that might threaten the peace. There’s just one problem. One man has not forgotten that the Telefon plan exists. And he intends to put it into operation.

The man is Nicolai Dalchimsky (Donald Pleasence). He’s not only a hardline Stalinist opposed to Détente, he’s also quite quite mad. He has the list of those fifty-two sleepers with the means of activating them and he’s set off for the US to do just that, having left Moscow mere hours before the KGB could arrest him. KGB General Strelsky (Patrick Magee) assigns Major Grigori Borzov to follow Dalchimsky to the US and to liquidate him. 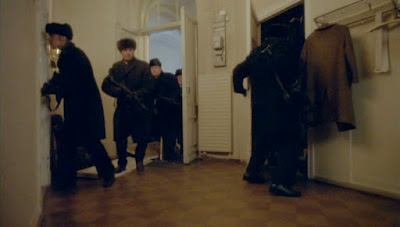 Borzov’s mission is of course ultra top secret since the whole idea is to liquidate Dalchimsky before the Americans figure out what’s happening - it would be very embarrassing for the Soviets to have to admit that Telefon ever existed. It would be even more embarrassing for the KGB since they never bothered to inform the current Soviet premier of its existence. They failed to inform him not because of any sinister motives but simply because they’d forgotten about the plan themselves.

Borzov will have only one person to help him in his mission, a top Soviet spy in the US code-named Barbara (played by Lee Remick). Borzov intends to tell her no more than the absolute minimum she needs to know to assist him. What he doesn’t know is that Barbara  knows things that he doesn’t know. 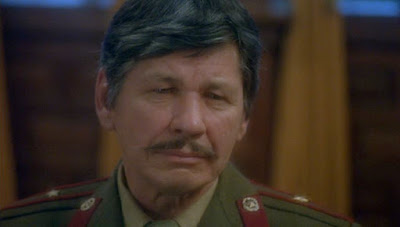 Bronson is in his usual fine form, tight-lipped but charismatic. It’s the sort of thing he did so well, playing an ice-cold character but with an unexpected warmth just occasionally breaking through when he flashes his characteristic smile with a twinkle in his eyes. Lee Remick’s performance is bright and breezy, almost as if she’s playing in a romantic comedy. That approach could have backfired but in fact it works, not only providing a nice contrast to Bronson but also adding an oddly chilling touch - Barbara is a happy-go-lucky soul always making lighthearted jokes but she’s also a cold-blooded killer when necessary.

Donald Pleasence plays an evil madman so it goes without saying that he does so superbly. Patrick Magee gets one of his best roles as the cheerful but ruthless KGB General Strelsky. Alan Badel plays Strelsky’s right-hand man, Colonel Malchenko, and plays him as a softly spoken good natured guy who really wishes this whole unpleasant business would go away. Tyne Daly is amusing as CIA intelligence analyst and computer whizz-kid Dorothy Putterman. 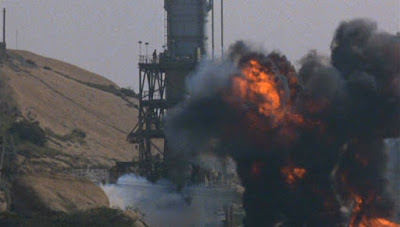 Don Siegel directed this movie and he gives us an effective mix of action scenes combined with slow-burning suspense. Action fans will be pleased by the generous ration of explosions.

This is a spy thriller that also falls into the category of 1970s paranoia movies, but it’s a paranoia movie with a difference. It’s not the US government who are the bad guys. It’s not the Soviets. It’s not evil right-wingers. The paranoia originates from the kind of bureaucratic screw-up that happens everywhere, but the general Cold War atmosphere of secrecy inflames the paranoia. It’s a nice twist that even the mania for secrecy engendered by the Cold War isn’t really sinister in this case - it’s just the common instinct of every government agency to be as secretive as they can get away with.

There’s also considerable reason for Major Borzov to be paranoid - he’s operating on a top secret mission in a foreign country and there’s nobody he can trust. He can’t even trust his colleague Barbara. He’s effectively alone. 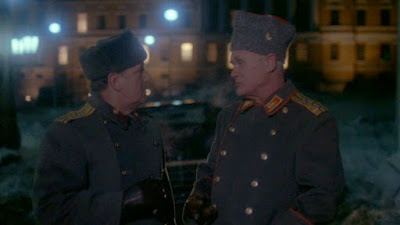 Of course a spy movie must have double-crosses and this film has plenty of those although they don’t always play out as you might expect. The ending is a bit of a surprise but it worked for me.

Telefon was released by Warner Home Video on DVD in Region 1 paired with another Bronson flick, St Ives, on a single double-sided disc. The transfer is anamorphic but it’s somewhat disappointing - the picture is very very soft in some scenes. On the other hand it’s a ridiculously cheap DVD release and it does offer two Charles Bronson movies that are otherwise unavailable so it’s still worth buying at the price.

Telefon is unusual enough to be a must-see for spy fans and Charles Bronson fans will be equally enthused. Overall it’s a fairly stylish and rather entertaining spy thriller enlivened by some wonderful acting. It has enough going for it to be highly recommended.
Posted by dfordoom at 17:30

I particularly recall Telefon because of the rathe creepy activation phrase (from the poem by Robert Frost).

I recall in some of the "phone scenes" how Siegel leaned heavy on the master of suspense with hitchcockian close-ups and strange angles. Apart from those scenes it was all about Bronson's charm. Sometimes almost to charming and funny i.m.o. Very popular in Scandinavia at the time I might add.

A very interesting thing about the movie is how it's whole central premise was lifted verbatim in the evil plot of the villain in the parody The Naked Gun. Even to the point of an entire sequence in Telefon where they demonstrate the mind control technique, involving a secretary and an unloaded gun. "Have you ever heard of activated hypnosis?" "I believe I just did!"