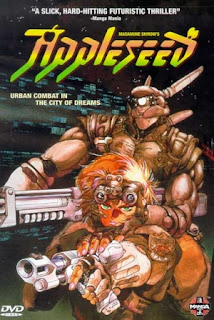 Appleseed is a 1988 anime OVA based on a manga by Masamune Shirow (who was also responsible for the original Ghost in the Shell manga).

Appleseed is set in the aftermath of the Third World War. As part of the rebuilding of society the model city of Olympus has been constructed. It’s an attempt at utopia and is strictly policed. It is inhabited partly by humans and partly by bioroids (artificial humans). The city is controlled by a central super-computer, Gaia.

All is not well in Olympus. Terrorism is a major problem. The terrorists claim to want freedom (of course being terrorists they would say that) and seem to be opposed to the bioroids.

We get straight into high-voltage action with a hostage situation that ends with several ESWAT team members dead. Deunan, a young female ESWAT cop, wants revenge and so she applies for a transfer to Special Investigations. She is tired of just responding to terrorists - she wants to track them down and destroy them. Her cyborg friend and partner Briareos will naturally go with her.

Now you have to concentrate a bit on this one because the background to the story isn’t explained in detail. The bioroids are not cyborgs. They’re not machines in any way. They seem to be artificial people, created by genetic engineering. They look completely human. There are also actual cyborgs, like Briareos. 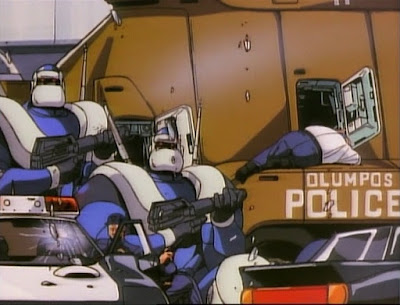 In fact this is an anime that you’ll probably appreciate more on a second viewing. Early on there’s a woman committing suicide which serves to provide the motivation for her husband’s actions but is otherwise inexplicable. Later on it starts to appear that the suicide is quite important in its own right - it’s a symbol of what’s wrong with Olympus, of the city’s lack of humanness.

One of things that’s interesting is that despite the obvious cyberpunk influence this is not a dystopian film in a conventional sense. Olympus is not utopia, but it’s not a dystopian nightmare. Most people there are happy. Of course that might well be the point that is being made - they’re happy because they have everything anyone could want in terms of material prosperity but they don’t have freedom. It’s closer to Brave New World than to your average cyberpunk future. In Huxley’s classic novel most people are happy because they have unlimited consumer goods and they have drugs. They don’t even want freedom. And in Olympus a large proportion of the population is not even exactly human, being bioroids who are programmed to like living in Olympus. Which is presumably what the terrorists don’t like - it’s an artificial utopia in which ordinary emotions like frustration and unhappiness are entirely suppressed. 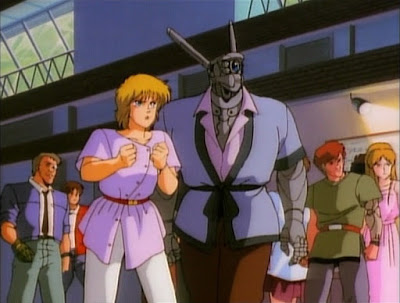 The relationship between Deunan and Briareos is ambiguous. They’re partners on the force. They’re friends. They live together. But are they lovers? We can’t be sure. Two unmarried cops sharing an apartment is presumably not wildly unusual. They’re obviously fond of one another but they don’t display the kind of affection you’d expect if they were a couple. This is another of the things that I’m not quite sure about, like whether Olympus is supposed to be a flawed utopia or a not-too-terrible dystopia - are these ambiguities deliberate or not?

The most dangerous of the terrorists is A.J. Sebastian. He really is pretty sinister and he’s a more memorable character than either Deunan or Briareos.

There’s a lot of action, some of it fairly graphic. The action sequences are generally fast-moving and pretty impressive. 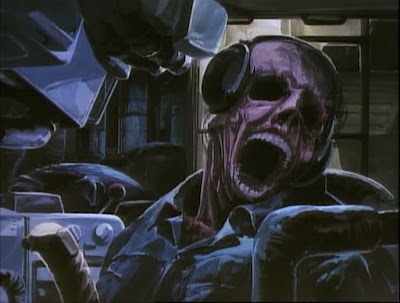 In judging Appleseed you always have to remember this was 1988. Anime for grown-up audiences was still a very new thing. Over the next few years budgets would get bigger, techniques would improve and anime would become more thematically ambitious. Appleseed was a step, and a moderately important one, on the road to much bigger and better things for anime. 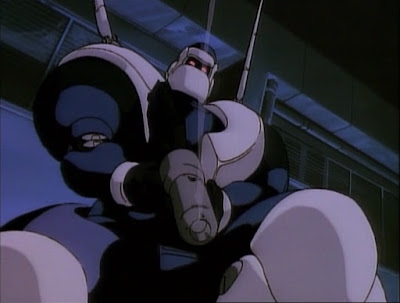 The DVD release offers a good transfer (it’s full frame which was how this movie was shot) with negligible extras. Both the English dubbed soundtrack and the Japanese version (with subtitles) are provided. I watched the subtitled Japanese version because I find that American accents in anime diminish the flavour.

A lot of people don’t like Appleseed. I think they may be missing the point. The plot and the characters’ motivations are a little confusing at times but I’m inclined to think that this is deliberate, that the intention is to avoid spelling things out for us. We have to decide for ourselves whether we approve of Olympus or not, and whether we think the terrorists are mostly wrong or whether they may have a point. Appleseed may not be a complete success and it’s certainly not in the same league as Ghost in the Shell but it’s entertaining and in its own way it’s provocative. Recommended.
Posted by dfordoom at 08:17