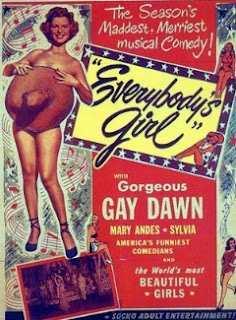 Everybody’s Girl is a 1950 burlesque movie, which means it’s an actual burlesque stage show that was filmed. In this instance it was a show at the Follies Theater at Third and Main in Los Angeles.

Burlesque movies were filmed stage shows, but usually without an audience. That’s understandable enough. Trying to record the sound live with the added complication of an audience would have been a technical headache best avoided on the very very limited budgets these films would have had. Of course the lack of an audience does mean you miss some of the atmosphere. It’s slightly disorienting watching the comedy routines with no audience response. Whether the strip-tease routines would have benefited from hearing an audience’s appreciative response is harder to say - without the audience I guess they do seem more tasteful (and they’re pretty tasteful anyway).

This one does have a subtly different feel to Midnight Frolics. The show seems to have a bit more glamour and style, the strippers are prettier and the strip-tease routines are just a tiny bit more daring. 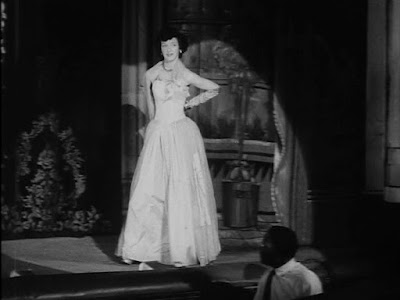 Which raises an interesting point. It seems quite likely that the comic routines have been cleaned up a bit for the purposes of filming. It’s also possible that the strip-tease routines have been toned down a little. In the case of a burlesque movie like Midnight Frolics it seems pretty certain that the girls have toned down their acts. The acts in Everybody’s Girl are slightly more risque but possibly still not quite going as far as they might go in a normal show.

Of course one of the interesting features of burlesque is that the risque nature of the stripping could vary quite a bit from town to town. In some towns stripping down to bra and panties was about as as the girls would dare to go, but when they played in other cities they could get away with much more and in some places they might even be tempted to risk full nudity. The problem for anyone making a burlesque movie in 1950 was deciding just how much of a risk you were going to take. 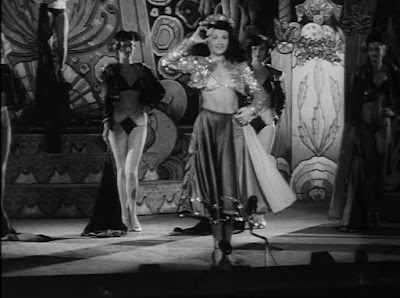 I’m quite intrigued as to what kind of an audience these movies find today. I’m inclined to think that this sort of thing would appeal more to women than men. There are some very beautiful women, they have fabulous hairstyles and wear gorgeous costumes and they dance and they project glamour and sensuality rather than overt sexuality. And there’s no actual nudity. I know that there are quite a few women these days who are fascinated by the world of burlesque.

What is particularly striking when you watch these movies today is that it’s sexiness rather than sex that they’re selling. It’s flirting and teasing and it’s good-natured and playful, which is why I’d imagine that women would enjoy them more than men. Unless of course you’re the sort of man who finds watching women indulging in flirting and teasing and playful sexiness very appealing. 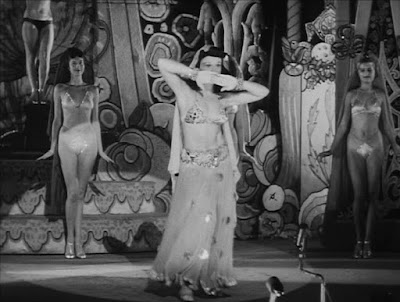 If you have an enthusiasm for the lost art of the strip-tease there’s plenty here to enjoy.

Everybody’s Girl is one of the six (count 'em, six) feature-length burlesque movies in Something Weird's two-disc Strip Strip Hooray set. They have found a very good print. In fact it’s good enough to suggest they may have found the original negative. Obviously filming a stage show imposes severe limitations but Everybody’s Girl is photographed rather well, and obviously with more than one camera. Overall it looks very good. Recommended, if it’s a subject that interests you.
Posted by dfordoom at 23:02