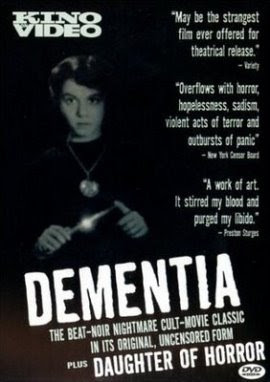 In the early 1950s writer-director John Parker completed his one and only feature film, a very strange little flick called Dementia. He tried to get it released on the art-house circuit in New York, but the New York censors had other ideas. It’s not so much any explicit content that was the problem as the general air of seediness, sexual obsession and sexual deviance.

A few years later another attempt was made to release the film under the title Daughter of Horror, with added voiceover narration (the original
Dementia has no dialogue at all). The narration, by Ed McMahon, is very campy but it does nothing to lessen the impact of this very disturbing little movie.

The central character is known only as The Gamine, and the movie is a glimpse inside the mind of this clearly insane young woman. Her mind is filled with visions of her father and mother, and of a police officer who looks exactly like her father and who is pursuing her for a murder she may or may not have committed. She is picked up by a wealthy debauched middle-aged man, and is forced to watch him gorging himself on a roast chicken dinner. This assignation ends in a murder. She may also have murdered her father, and her father may have murdered her mother, but there is absolutely no way to judge the reality or otherwise of any of these events.

Visually it’s reminiscent of a surrealist vision of film noir. The cinematography was done by William C. Thompson, a veteran of countless exploitation movies. His career included several collaborations with the one and only Ed Wood, but this has nothing in common with Wood’s movies. This is both an art-house movie and a horror movie, a weird mix of exploitation and avant-garde. There’s some great jazz on the soundtrack as well. The cast are mostly complete unknowns. Ben Roseman is very creepy as both her father and the cop, and Adrienne Barrett contributes an unsettling performance as The Gamine.

You can find this movie at archive.org. Although it’s rather dark it’s quite an acceptable print, and it’s probably supposed to be very dark anyway! A very strange but very intriguing and oddly effective move, and well worth a look. I believe both versions of the movie have been released on DVD by Kino.
Posted by dfordoom at 00:40