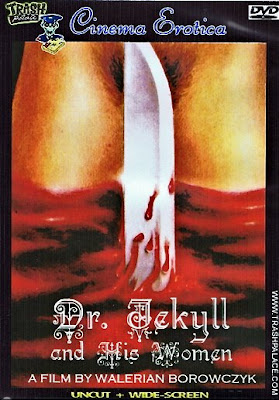 Dr Jekyll and his Women (Docteur Jekyll et les femmes) is Walerian Borowczyk’s 1981 film version of Robert Louis Stevenson’s classic gothic tale The Strange Case of Dr Jekyll and Mr Hyde. The biggest problem with adaptations of Stevenson’s novella has always been finding a way to do the transformation scenes convincingly and without Mr Hyde looking like a shambling neanderthal. Borowczyk solves the problem by using two different actors, with Udo Kier as Dr Jekyll and Gérard Zalcberg as Hyde.

Borowczyk’s movie is more overtly sexual than the more familiar Hollywood versions, and raises the level of violence and hatred displayed by Hyde as well. It’s also a less sympathetic portrayal of Jekyll, who is motivated more openly by a desire to unleash his darkest desires and to use his Hyde persona to enjoy doing evil. There’s more stress (despite the use of two actors) on the idea of Hyde as being very much an integral part of Jekyll’s personality.

With the action taking place almost entirely within a single house the film has an intensely claustrophobic feel, emphasising both the sexual repression of the era and the catastrophic consequences of Hyde’s violent overturning of that repression. The transformations into Hyde are achieved by Jekyl’s immersing himself in a bathtub filled with a chemical soup. It seems a little ridiculous the first time you see it, but becomes increasingly disturbing.

As much as I adore Udo Kier, it’s Howard Vernon and Patrick Magee who steal this film. Vernon is Dr Lanyon, who taunts Jekyll with the supposed absurdities of his theories of transcendental medicine. Patrick Magee is completely over-the-top (actually he always was completely over-the-top but this time he’s even more so) as an elderly general with a somewhat bizarre relationship with his daughter.