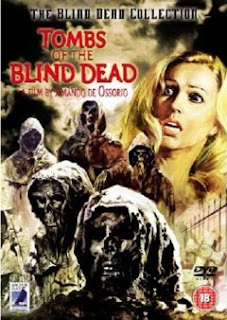 Tombs of the Blind Dead (La Noche del terror ciego) was the first of four Blind Dead movies made in Spain back in the 70s. The village of Berzano was in the 13th century a stronghold of the Knights Templar. The order was accused of witchcraft and various assorted evil practices and suppressed, and the knights were executed. They won’t stay dead though. Periodically they rise from their tombs, blind and silent, and seek human blood for their infernal sacrifices.

Cut to the present day and a young woman quarrels with her friends and jumps off a (very slow-moving) train as it passes the ruins of Berzano, and decides that the ruined abbey would be a great place for a young woman on her own to spend the night. What could possibly go wrong, in the middle of nowhere, in a place of such evil reputation that the train driver is too terrified to stop the train?

This is more or less a zombie movie. The dead knights are decaying and skeletal, they shuffle about like typical 70s movie zombies, and they appear to possess very little in the way of intelligence other than their thirst for victims. But Tombs of the Blind Dead has a number of advantages over the typical zombie movie. The basic idea of the dead Knights Templar is a good one, it has plenty of atmosphere, and the knights themselves are very very creepy. Director Amando de Ossorio uses some very simple but very effective techniques to add to the feeling of dread, such as having the knights on horseback filmed in ever-so-slightly slow motion. The makeup effects are exceptional. And since the undead knights aren’t done with CGI they don’t have that fake look that you always get with CGI – these guys are really very scary.

This is a highly effective and very entertaining slice of eurohorror, and although the Region 2 DVD from Anchor Bay has very little in the way of extras the transfer is very impressive.
Posted by dfordoom at 22:48