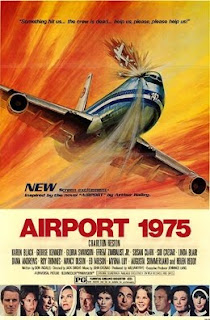 This is a movie that has everything you could ask for in a 70s disaster movie. It has a ludicrous plot. Cliché-ridden dialogue. Superannuated Hollywood stars. Overly dramatic music cues. Unbelievable characters. A cute little girl being rushed to LA for a life-saving operation. Nuns. And it has Chuck Heston! It’s like being in bad movie heaven.

It’s basically a much sillier but much more entertaining retread of Airport. This time the disaster threatening an airliner comes in the form of Dana Andrews in a small twin-engined Beechcraft Baron. He suffers a fatal heart attack and yes, you guessed it, his little airplane is now about to fly straight into the path of an oncoming 747 packed with Hollywood has-beens. The resulting collision leaves the entire flight crew of the 747 dead or unconscious. Surely nothing can save this doomed airliner now?

But chief stewardess Karen Black has other ideas. If everyone else is dead she’ll fly the damned plane herself. How hard can it be? I mean, it’s not rocket science, is it? And all those funny little dials must mean something. Luckily she just happens to be Charlton Heston’s girlfriend, and we know Chuck isn’t going to let anything bad happen to his gal. And he used to be a chief instructor on 747s, so all he has to do is tell her what to do over the radio.

Of course there are a few minor problems. Number 3 engine isn’t working, and most of the instrumentation was smashed in the collision. There’s a gaping hole in th

e cockpit. LA is fog-bound, so the 747 has had to be diverted to another airport, one that just happens to be completely surrounded by mountains with one of the most difficult and treacherous approaches of any US airport. So the obvious thing to do is to get another pilot aboard the aircraft. The fact that the aircraft is actually in flight is merely a minor inconvenience. And luckily the airliner now has a very large hole in the fuselage, a hole that could almost have been cunningly designed to allow another pilot to climb into the cockpit from outside. So it should be fairly easy really.

Among the many joys of this movie is the casting. The sick little girl is played by Linda Blair (yes that Linda Blair, the spawn of Satan from The Exorcist ). And sitting just a few seats away from her are two nuns! Maybe it’s just that I’m a bad person, but I kept wondering - do those nuns know who she is? And how much danger they’re in? When one of the nuns starts singing to her I was certain her head would start spinning at any moment. I know mine would have.

You can also play spot the has-been. There’s Myrna Loy, as a loveable drunk. There’s Dana Andrews as the poor sap who crashes into them (which pretty much sums up his career really). And there’s Gloria Swanson! Playing Gloria Swanson! After this movie Ms Swanson very wisely decided to retire permanently from acting. The bad acting is even more spectacular than the stunts. Chuck Heston is in full-on square-jawed hero mode. Karen Black (an actress I’ve always liked but who does have a tendency towards somewhat hysterical scenery-chewing in the wrong role) over-acts outrageously, although

given the quality of the script she may have known exactly what she was doing and decided it was the only way to handle this movie. Or she may have been making an all-out attempt to avoid being cast in the next Airport sequel.

The Region 4 DVD is sadly lacking in extras. Perhaps it’s not altogether surprising - I can’t imagine anyone involved in this movie remembering it fondly as one of the highlights of their career and wanting to revisit what are undoubtedly painful memories.

Judged by any objective standards this has to be one of the worst movies ever made. It’s worse than Earthquake, and disaster movie aficionados will be aware that that’s saying a good deal. Every line of dialogue is a cliché. Every character is a stereotype. Every plot twist is clumsily telegraphed in advance. The plot is absurd. The acting is hammy to a degree that defies belief. And it’s enormous fun. I loved every minute of it.
Posted by dfordoom at 16:45

Sounds like you really got a kick out of this one.

Yes, and I must admit I really enjoy Charlton Heston in stuff like this. He just does the square-jawed hero thing so well.