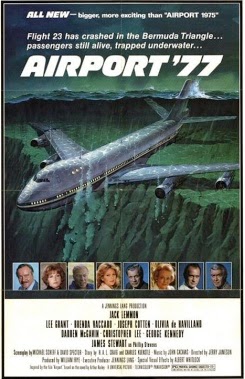 The production team behind Airport '77 found themselves facing a formidable challenge indeed - to come up with something even more ridiculous than Airport 1975. And it has to be said that they succeeded admirably. While it’s just about possible to believe that we’re meant to take Airport 1975 seriously, or that it at least takes place in our reality, we can be under no such illusions in the case of Airport '77. This one is pure fantasy. Wealthy industrialist and art collector Philip Stevens (James Stewart) has had a 747 fitted out as a gigantic luxury corporate jet. Its first task is to ferry a planeload of his friends, relations and some assorted VIPs (along with some extremely valuable paintings) to the opening of his new art gallery. Disaster strikes over the Bermuda Triangle when the aircraft is hijacked by a gang that includes the co-pilot and the chief steward. They intend to land the 747 on a disused World War 2 landing field on an island, transfer the paintings to another aircraft and then head off to South America.

The plot naturally miscarries. Flying low to avoid radar, the co-pilot manages to fly the plane straight into an oil rig. The aircraft crashes into the ocean and sinks, with the crew and passengers still alive on board! Since the gang had been evading the air traffic control radar and heading in the opposite direction from the original course the resulting search takes place in entirely the wrong area of ocean. Somehow the survivors must find a way to alert the searchers to their actual location, while also dealing with the fact that the aircraft is slowly filling with water. And the worst news of all is that Charlton Heston is not in this picture, so who is going to save them?

Standing in as the chief hero is the aircraft’s pilot Captain Don Gallagher, played by Jack Lemmon at his hammiest (and that’s saying quite a lot). Lemmon tries hard, but he just isn’t square-jawed enough to inspire confidence. The lack of a plucky stewardess like Karen Black is an added concern. Captain Don does have Darren McGavin as a kind of general purpose assistant hero, but he’s no Chuck Heston either. Also aboard is Christopher Lee as a scuba-diving scientist, so there is some hope. And although he does very little George Kennedy is wandering about in the background somewhere.

The passengers include the expected assortment of Hollywood has-beens, in this case headed by Olivia de Havilland and Joseph Cotten. Oddly enough there are no nuns or critically ill children desperately awaiting kidney transplants on the passenger list, but there are a couple of kids and one of them soon falls ill, thus satisfying one of the main requirements of any good disaster movie. And luckily the passengers include a vet, so the injured have someone to look after them. Compared to Airport 1975 though the cast is a little on the disappointing side.

The main attraction of this film is of course the remarkably improbable plot. Some rather iffy special effects add to the fun. There’s lots of breathless excitement as the plane keeps springing new leaks while the Navy is frantically scouring the oceans looking for the missing 747. It’s your classic race against time, and naturally there’s the added factor of the steadily depleting air supply. If you like your disaster movies campy and silly (and I’m assuming that’s how all disaster movie fans do like them) then this one should satisfy your requirements quite satisfactorily. Good enjoyable nonsense.
Posted by dfordoom at 13:31

You've got more good things to say about this movie than I have.

I really enjoy campy movies, which is the only way to enjoy movies like this! It's a truly terrible movie, but if you like camp it's fun.