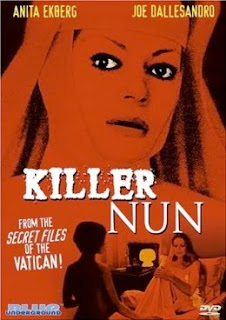 Killer Nun (Suor Omicidi) is a 1978 release that was included on the British Director of Public Prosecutions’ list of banned video nasties in the 80s. It’s now been released uncut, and watching it demonstrates the utter insanity of British censorship practices. It barely even qualifies as a horror movie, much less a video nasty.

One can only assume that the very thought of evil nuns was enough to threaten the entire fabric of British civilisation.

This is actually a very unusual nunsploitation movie. Most nunsploitation flicks have an historical setting and they generally take pace within the confines of a nunnery. This one has a contemporary setting, in a hospital. It’s a psychiatric hospital, and Sister Gertrude (Anita Ekberg) is the head nurse. She had an operation a shirt time previously to remove a brain tumour. The tumour was benign, and she has made a full recovery. But she doesn’t believe it. She is obsessed by the idea that she is dying. She has also developed a rather nasty morphine habit, and this combined with her health obsessions has made her somewhat unstable.

She has also been troubled by sexual thoughts. The fact that she shares a room with Sister Mathieu, who is obviously in lust with her and has a disconcerting habit of wandering about naked, doesn’t help. But Sister Gertrude is not interested in Sister Mathieu. She wants a man. Desperately. And when you add these sexual cravings to her other problems it’s not entirely unexpected when she begins to crack up. She steals a ring from a dead patient, and buys herself lots of drugs and a slinky dress, and indulges in some steamy anonymous sex with a guy she picks up in a bar.

This is bad enough, but patients have started to die rather mysteriously. By falling out of windows, or with their heads smashed in. The hospital administrators and the Mother Superior are determined to avert a s 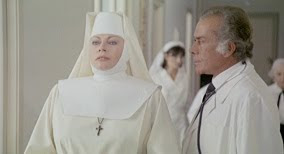 candal. They’re not going to allow a few dead patients to damage the shining reputation of the hospital or of the nursing order. The patients on the other hand are starting to show signs of rebellion, and when more deaths occur it becomes more and more difficult to prevent the police from being involved. And given Sister Gertrude’s increasingly erratic behaviour a police investigation could be very inconvenient. Sister Mathieu is doing her best to protect Sister Gertrude, while also doing her best to find a way of getting into Sister Gertrude’s bed.

This is more a psychological horror/murder mystery than a classic nunsploitation film, even though it does contain many of the essential features of the nunsploitation genre (lesbian nuns and a fairly modest amount of nudity). There is some gore, but hardly enough to explain how it could ever have been considered as a video nasty.

Hardcore gorehounds will be disappointed by this one, and those hoping f 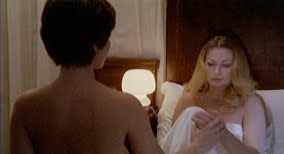 or a nunsploitation sleaze-fest will be equally disappointed. That’s not to say it’s a bad movie. You just have to accept it on its own terms. If you accept it as a psychological thriller with some giallo influence then it’s reasonably effective.

The casting is eccentric but surprisingly successful. Anita Ekberg is rather good, resisting the temptation to indulge in full-on scenery chewing. Joe Dallesandro as the head doctor gives one of his better performances.

Director Giulio Berruti doesn’t seem to have had much of a career but he does a competent job. The movie would probably have enjoyed greater success had the exploitation elements been more strongly emphasised but it stands as an interesting oddity, and it’s worth a look if you enjoy off-beat 1970s Italian cinema.

The Shameless DVD presentation claims to be complete and includes previously cut scenes. Bizarrely enough the cut scenes (which are the only ones in Italian with English sub-titles while the rest of the movie is dubbed in English) are totally innocuous! The picture quality is acceptable, but the sound quality leaves something to be desired. It’s just a little muddy at times.
Posted by dfordoom at 17:34