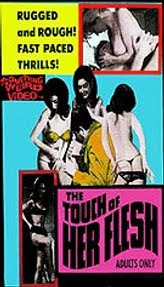 The Touch of Her Flesh has the reputation of being one of the more sleazy sexlpoitation films of the 60s, so of course I just had to see it.

The three movies in the Her Flesh trilogy were made by the legendary husband-and-wife team of Roberta and Michael Findlay (they co-wrote the scripts, Roberta did the cinematography, Michael directed and edited and acted as well), this one, the first of the series, appearing in 1967. All three are included on the one DVD from Something Weird.

Michael Findlay plays a slightly nerdy weapons collector who finds out his wife Claudia is having an affair when he returns home early from a business trip to find her in bed with another man. He runs into the street, distraught, and is knocked down by a car. The accident leaves him blind in one eye and half-crippled. He vows to have his revenge, not just on Claudia but on all women, especially those who display themselves naked and sell themselves, tempting men with their bodies. He’s not a happy camper, and he’s not really quite all there any more. He lives alone in a grungy apartment, and he broods a lot. 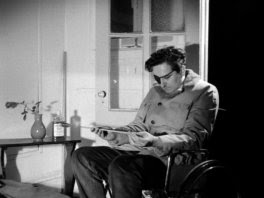 He starts his campaign of revenge in the burlesque theatres of New York, but he’s also tracking down Claudia. She’s been working as an artist’s model for a woman painter, and he intends to find out where her studio is. There’s the expected showdown in the studio, and that’s pretty much all there is as far as a plot is concerned.

These films have a reputation for extreme misogyny, but while there’s some truth in that contention it isn’t really any worse in that respect than any one of a dozen big-budget Hollywood crime thrillers. It’s just a bit more honest. The later movies in the trilogy are however reputed to be considerably more violent. 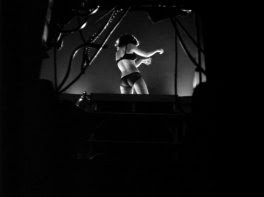 The most noticeable thing about the movie is that it’s very competently made. Roberta Findlay’s black-and-white cinematography is thoroughly professional, and there are some reasonably nifty and ambitious sequences, especially late in the film. The acting on the other hand is bad even by the standards of sexploitation movies, although Michael Findlay’s performance does manage to be fairly unsettling. There are some nicely atmospheric scenes in the burlesque clubs, and as always with these types of movies some fascinating glimpses of 1960s New York street life.

The sex and nudity are quite tame by later standards, and there’s very little graphic violence. It’s the subject matter that is disturbing (w 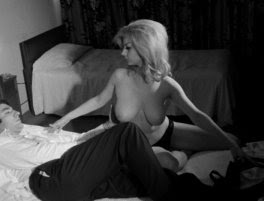 hich is the case with most of the sexploitation “roughies” of this period).

The obsessiveness of Michael Findlay’s performance and the stylishness of the production make this one worth watching, and Something Weird have done their usual superb job with the DVD transfer.

And there’s go-go dancing, always a plus in my book.
Posted by dfordoom at 18:11