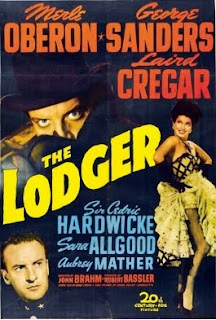 John Brahm’s 1944 movie The Lodger was the third (but certainly not the last) movie adaptation of Marie Belloc Lowndes’ 1912 novel, based loosely on the career of Jack the Ripper.The first film version was made in 1927 by a young up-and-coming English director named Alfred Hitchcock. Brahm’s version is the most celebrated one, and it’s certainly the boldest and most unusual.

The novel, which doesn’t mention the Ripper but refers to the mysterious killer as The Avenger, had been set in contemporary London, and Hitchcock had followed suit by setting his film in the London of 1927. Brahm and screenwriter Barré Lyndon on the other hand made their movie specifically about Jack the Ripper and set it in the London of Jack’s time, in the late 1880s.

The movie opens with one of the Ripper’s murders, and then we see a very large and very imposing man appear on the doorstep of a middle-class household, having answered an advertisement for a room to let. The man calls himself Mr Slade, but the name is false, taken from the name of a nearby street. This Mr Slade (played by Laird Cregar) is a rather diffident softly spoken man, who wants to rent the attic rooms in the house as well, ostensibly to be used for his medical researches (he is a medical man of some description).

The middle-aged couple who own the house have a daughter, Kitty (Merle Oberon), a rising music-hall actress. It becomes apparent that Mr Slade strongly disapproves of actresses, and his disapproval seems to stem from some deep personal reasons.

One really bold decision made by Brahm and Lyndon was to make it clear right from the outset that Mr Slade is indeed the Ripper. This is not a spoiler - it’s not only absolutely clear, but it’s also essential to the success of the film that we should know from the start that he is without a shadow of a doubt the killer. Such suspense as the film offers comes from the fact that the other characters in the movie, most notably Kitty, do not know he is the murderer, and in fact they believe fairly strongly in his innocence. 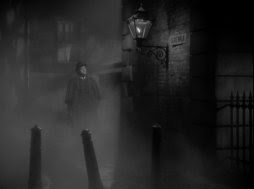 An even bolder decision was to give Cregar more or less a free hand to interpret the part as he saw fit, and to put the emphasis of the film on the killer’s psychology. And equally bravely, to make the killer a strangely sympathetic character, a man tortured by his own demons and driven to kill by his sexual obsessions. Cregar, who was homosexual and who had major problems accepting his own nature, gave the character not just homoerotic overtones but also added an incestuous obsession with his dead brother. Mr Slade gazes longingly and lustfully at a portrait of his deceased brother as he bitterly tells Kitty how the young man was destroyed by his love for an actress. Mr Slade hates women as destroyers, but loves them for their beauty. The most extraordinary thing about all this is that somehow or other both 20th Century-Fox and the Hays Office appear to have completely missed the blindingly obvious sexual aspects of Cregar’s characterisation.

Brahm makes extensive use of low-angle shots to emphasise Cregar’s bulk, which contrasts oddly yet effectively with his very quite very soft voice. It also serves to heighten the strange menace of the character and the way he dominates the other characters so completely. George Sanders gives a very muted performance as the police inspector in charge of the investigation who falls for the charms of the glamorous Kitty. Sanders and Cregar were friends, so it’s possible that Sanders deliberately played the role in that subdued manner to allow Cregar to dominate the movie. It actually makes the movie more effective since it keeps the focus squarely on Mr Slade. Merle Oberon is exceptionally good as Kitty.

There’s a rather funny scene where Sanders is chatting Kitty up while showing her through the grisly displays of murder weapons and killers’ death masks in Scotland Yard’s Black Museum. While most female characters in a 1940s movie would be inclined to swoon in horror or shudder with distaste, Kitty is entirely unaffected - she has the undivided attention of an attractive man and that’s all that matters, and if anything she seems mildly excited by the exhibits. The scene is not just amusing but also very effectively sums up Kitty’s character and her priorities. 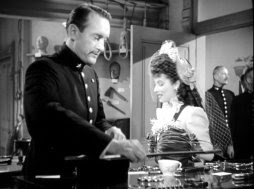 Brahm and cinematographer Lucien Ballard shot the movie in a very Expressionist and very excessive gothic style with enormous quantities of both fog and shadows. There are some wonderfully effective shots, and there are plenty of unusual camera angles but the effect is never merely gimmicky. The movie is absolutely awash with over-the-top gothic atmosphere. The use of lighting is superb. The visual aspects of the movie and Cregar’s performance are the two factors on which the movie’s success is based. The plot has some serious logical deficiencies and some gaping holes, but the plot is of very little importance. As a suspense film or a mystery film it doesn’t really succeed, but as a fascinating character study of psycho-sexual aberration it succeeds so well that its weaknesses as a suspense movie are of little consequence. And mercifully there’s none of the puerile comic relief that ruined so many American horror movies of this era.

The DVD includes a host of extras, including an amazingly poor commentary track by Alan Silver and James Ursini. There’s a brief featurette that adds little of importance. It’s a compelling argument for not wasting money and effort on providing worthless extras. Kim Newman does provide a few good insights on the featurette - a commentary track from him would have been a much more worthwhile extra.

This is a strange but undeniably intriguing movie to have been made by a major studio in 1944. It’s also much much better than the other films of Brahm’s film that I’ve seen.
Despite some minor flaws it’s one of the most interesting horror films of that decade, a movie worthy to stand alongside Cat People, I Walked with a Zombie and Son of Dracula as one of the four or five best American horror movies of the 40s.
Posted by dfordoom at 14:12

Remember Forry Ackerman doing a spread on Cregar in FAMOUS MONSTERS in the 60s...everything I've seen him in has a great performance from him whatever the merits of the film and actors around him...such a pity he didn't do more...