A Youth in Babylon 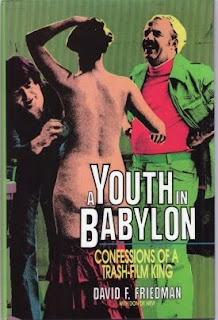 David F. Friedman is one of the legends of exploitation cinema. A Youth in Babylon is the first half of what was intended to be a two-volume autobiography although the second part never materialised. The book is like his movies - brash, unsubtle, shameless and joyously trashy.

Friedman started his career in movies respectably enough as a publicist for Paramount, but respectability and life as a wage slave never did appeal to him and in the mid-50s he accepted an offer to work for Kroger Babb, one of the greats of the exploitation movie business. Babb made a fortune from what was a movie version of a travelling medicine show, the centrepiece of which was a corny 15-year-old cinematic morality play called Mom and Dad which he marketed as an educational sex film, accompanied by a lecture by famed sex hygiene expert Elliot Forbes. Audiences were given the opportunity to buy paperback books explaining the mysteries and wonders of reproduction, at just a dollar each or two dollars for the set of two. Since the books cost nine cents to produce the show was a huge money-spinner. Babb had the reputation of being a showman who could sell absolutely anything, a talent that the young Friedman already possessed in abundance but which blossomed under such expert guidance.

The exploitation movie business of the 1920s through to the early 60s was essentially an offshoot of the world of circuses, sideshows and travelling carnivals, and this carney world was Friedman’s natural environment. Friedman went on to be one of the pioneers and leading figures in the sexploitation movie business of the 60s and 70s, producing and writing (and occasionally directing) a series of immensely profitable nudie-cuties and roughies. With his partner in crime Herschell Lewis he also invented the gore movie.

Friedman comes across as a loveable rogue, with no illusions about himself or his movies but with an infectious zest for life. He has some wonderful anecdotes about the fabled
Forty Thieves, the shameless hucksters who created and maintained the bizarre but fascinating exploitation movie genre. They were essentially conmen, selling movies with virtually no sexual content but convincing audiences they were about to see a veritable feast of naked flesh. They were imbued with the carney spirit. You were either “with the show” meaning you were one of those who understood the rules of the game, or you were a mark.

It’s all highly entertaining and it provides a wealth of information on this vanished cinematic world. The book covers Friedman’s career up to the mid-60s. It’s a great pity that the projected second volume has never appeared. A Youth in Babylon is highly recommended to any serious cult movie fan.
Posted by dfordoom at 18:30