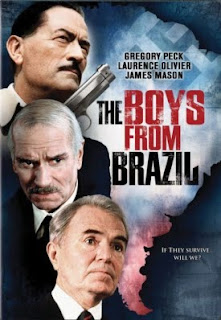 The Boys from Brazil is one of those movies that sounds like it’s going to be a total hoot, but somehow is never quite as much fun as it should have been.

What we have here is a bunch of ageing Nazis who have established a fairly formidable organisation in Brazil. One of the leading lights of the organisation is a certain Dr Josef Mengele (Gregory Peck in an interesting piece of casting against type). And as tends to happen when you have unemployed mad scientists with too much time on their hands, Dr Mengele has come up with a cunning plan. He’s not just going to clone Hitler. No, hes going to create 94 Hitler clones!

Now I know what you’re going to say. Merely reproducing Hitler’s DNA is not going to automatically produce another charismatic leader who will usher in the Fourth Reich. Don’t worry Dr Mengele is way ahead of you. He’s anticipated this. Each of these 94 baby Hitler clones will be adopted out to a family as similar to Hitler’s actual family as possible. Same socio-economic backgrounds, parents of the same age, etc. And Mengele and his cronies will intervene at certain crucial points in their lives, in an effort to ensure that their life histories are as similar to the late Nazi leader’s as possible. Sounds clever, doesn’t it? At this point Robert Burns would no doubt chime in with some wise observation about the 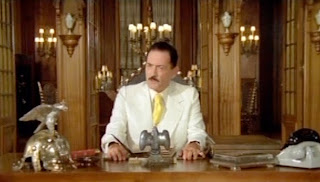 best-laid schemes of mice and mad scientists, but unfortunately Dr Mengele is too busy to be reading poetry.

Naturally you will appreciate that this is still an amazingly silly idea. Being born in the mid-1960s these miniature Hitlers obviously aren’t going to grow up to be just like their prototype. But of course it’s only a movie, and movies about mad scientists, elderly Nazi conspiring to achieve world domination and Hitler clones aren’t the sorts of movies that are generally all that strong on logic.

But that’s precisely the problem with this film. It’s basically a fun silly B-movie, but made on an A-picture budget. It’s all the fault of Steven Spielberg. With Jaws he’d created the monster that ultimately destroyed good Hollywood film-making - the over-budgeted, over-hyped, over-produced B-movie blockbuster. And unfortunately the British film industry tried to copy that model, with movies such as The Omen and The Boys from Brazil (which came out in 1978). They more or less got away with it in the case of The Omen because whatever its faults it at least knows it’s a serious horror movie. But The Boys from Brazil isn’t sure whether it’s a classy big-budget thriller or 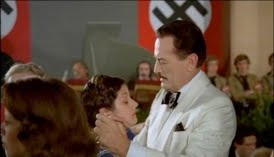 That lack of certainty is reflected in the casting. From Gregory Peck you expect gravity and serious acting. From Laurence Olivier you expect complete hamminess. And from James Mason, well he’s the kind of actor who could go either way. What’s possibly most surprising is that the campest performance in the movie comes from Gregory Peck. He’s the one person who seems to understand how the movie should have been approached - with tongue planted firmly in cheek. What’s particularly nice about Peck’s performance though is that it starts off fairly seriously. Mengele is clearly bonkers, but at first he seems frighteningly clear-headed and focused. As the movie progresses he loses his grip on both his plan and his sanity, and he slowly transforms into a ranting madman.

While the movie has its problems, it does have its strengths as well. What I liked most was the fact that both the younger Na 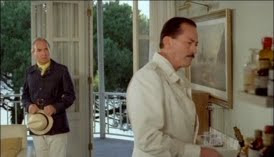 zis and younger Nazi-hunters are pretty ineffectual. So the entire movie becomes an epic struggle between two crazed old men, Mengele and Nazi-hunter Ezra Lieberman (Laurence Olivier). Olivier’s portrayal of Lieberman as just as dotty and just as much a yesterday’s man as Mengele was fairly courageous in 1978. In strictly dramatic terms though it works very well. The other characters are all irrelevances. They only exist so the two major characters have someone to explain the plot to. It’s the implacable battle of wills between Lieberman and Mengele that matters.

This next paragraph is mildly spoilerish, but without giving away specific plot details.

There’s a nice touch of irony at the end, because to the boy Hitler (in fact to all the boy Hitlers really) the ideological arguments between Lieberman and Mengele are of no interest whatsoever. They might well grow up to be monsters, but if they do they’ll be the kinds of monsters that neither Lieberman nor Mengele will recognise.They won’t be continuing the struggle that has consumed the lives of these two ageing ideological warriors.

It’s an entertaining enough movie, but I still think it needed a slightly more over-the-top high camp approach.
Posted by dfordoom at 01:51

I don't really have much to say about the film but I have to note this coincidence: waiting for a bus back from work this evening, I overheard one guy explicating the plot of this very movie to his pal.

I also recall reading a comic book about a Hitler clone. This one grew to maturity and his handlers dressed and groomed him in der Feuhrer's image. They showed him films of the concentration camps to show him what to do with Jews. Then they put a gun in his hand and put him in a room with a Jewish child. He shot himself.

I have seen the movie but the only things that stand out about it for me are Peck's roaring accent and that climactic scene with the one Hitler kid and the dogs. I thought it was pretty funny.