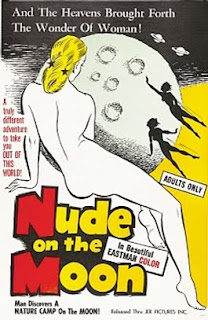 You expect a fairly high weirdness quotient in any Doris Wishman movie, but Nude on the Moon really is very weird indeed. This was sexploitation auteur Wishman’s only real foray into the world of science fiction, which is certainly science fiction’s loss.

Dr Jeff Huntley is a brilliant young scientist who dreams of taking part in the first manned mission to the Moon. He and his older colleague have in fact been undertaking their own private space program, and now that Jeff’s grandpa has died and left him $3 million they have enough money to make their dream a reality. They don’t all kinds of fancy stuff like mission control centres and radar tracking stations. They have a rocket and a couple of spacesuits, and some home-made rocket fuel. And really if you need more than that then you don’t deserve to be a real space explorer.

So they set off for the Moon. The journey there provides us with some of our first classic Doris Wishman touches. Apart from the delightful amateurishness of the model shots, the rocket that makes the journey is clearly not the same rocket that blasted off from Earth, and it’s clearly not the same rocket than lands on the Moon. But then if you’re expecting a serious science fiction film, what are you doing watching a Doris Wis 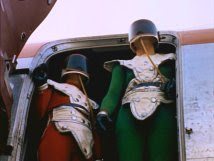 Once they arrive on the lunar surface, our two intrepid explorers encounter their first surprise. The Moon has trees and grass and in fact looks pretty much like the Earth. But they’re in for even bigger surprises. Earth’s satellite is inhabited - by nudists! Well technically they’re not really nudists, since they’re not completely nude. Apparently lunar technology advanced as far as inventing the bikini bottom, but the bikini top proved to be beyond their capabilities. In any case, the Moon supports a thriving population of topless women. But this is an equal opportunity sexploitation movie, since the male inhabitants of the Moon also go shirtless. So there’s just as much male eye candy as female eye candy.

The moon people don’t actually speak, but communicate telepathically by means of little antenna thingies on their heads. At first they’re a little suspicious of their strange visitors from Earth, but eventually d 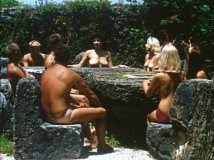 The Moon has a kind of queen, but she’s a fairly benevolent kind of queen. Our two astronauts gather rock samples, and take lots of photographs. Perhaps not surprisingly, most of their photographs seem to be of topless moon women. But that’s understandable, since clearly such photographs will have immense scientific importance.

One unexected feature of this film is that there’s very little footage of people’s feet. This is highly unusual for a Doris Wishman movie. It’s also in colour, while most of her 60s sexploitation classics are in black-and-white. The usual practice at that time seemed to be f 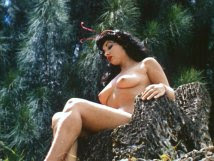 or nudie-cuties (and this movie definitely belongs to that sub-genre) to be shot in colour, while the later varieties of American sexploitation such as the roughies were mostly in black-and-white.

The nudie-cutie genre was essentially a response to a 1950s Supreme Court decision that ruled that nudity was not obscene. That decision led to a rash of nudist camp movies, but naked volleyball gets pretty tiresome after a while so the nudie-cutie was an attempt to add some humour and at least some kind of plot. The enormous success of the first such movie, Russ Meyer’s The Immoral Mr Teas, led to a tidal wave of imitators.

Nude on the Moon is definitely one of the more off-beat examples. The nudie-cuties were mostly good-natured fun and totally lacking in any kind of violence. Seen today this gives them a kind of innocent charm.

Nude on the Moon is part of a Something Weird double-feature, along with Blaze Starr Goes Nudist (which I’ve yet to see) and the usual array of Something Weird extras.
Posted by dfordoom at 19:57

This came out in 1961? Interesting. I never heard of this director. How many theaters was this released in, do you know?

Tom, I have no idea how many theatres played it. Nudie-cuties such as this one were highly profitable, and played independent theatres, drive-ins, arthouse cinemas, inner-city grindhouses, etc. As independent productions they were not subject to the Hollywood Production Code.

Doris Wishman was a fascinating director - her movies are strange and quirky and totally individual. Bad Girls Go To Hell is one of her most entertaining movies. Most of her movies are available on DVD.