Hercules and the Tyrants of Babylon (1964) 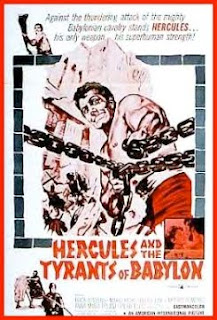 Hercules and the Tyrants of Babylon (Ercole contro i tiranni di Babilonia) is really pretty much a stock-standard Italian peplum (the European term for what Hollywood called sword and sandal epics). It unfortunately lacks the edge of weirdness and the ultra-camp quality that distinguishes the best of these movies, but this 1964 release is entertaining enough.

Following on the death of the previous king, the mighty empire of Babylon is now under the joint rule of his three children two brothers and a sister. All three of them equally treacherous, and equally ruthless. But Babylon has problems. Its slave trade is being interrupted by the activities of a mighty warrior who can take on whole armies single-handedly. Could this be the legendary Hercules? If so, what is he doing in Babylonia?

The answer is that he is searching for his girlfriend, who happens to be the Queen of the Hellenes. She was carried off in a slave raid. The Babylonians know that one of the women captured in the raid was the queen, but they don’t know which one. And Hercules is not the only one searching for her. The king of the Assyrians is anxious to find her, and to marry her to further his own imperial ambitions. And both of the Babylonian kings also have plans to marry her, in order to unite the 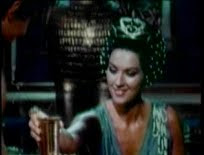 mighty empires of Babylon and Greece. Their sister Queen Taneal has mysterious plans of her own, involving the Assyrian king.

There are no supernatural elements in this film. It’s straight palace intrigue mixed with adventure, and a touch of romance (although the sexual chemistry between Hercules and his lady love doesn’t exactly set the screen alight). There are a couple of nice touches though. The gigantic winch attached to equally enormous chains linked to all the major buildings in the city of Babylon is a cute idea (I won’t spoil things by revealing its rather odd purpose or the use to which Queen Taneal intends to put it).

Hercules of course must rescue the queen of the Hellenes and the other slaves as well, while avoiding the potentially fatal attentions (and I mean literally fatal) of Queen Taneal.

Director Domenico Paolella churned out vast numbers of B-movies, and although the script lacks and real inspiration Paolella’s direction is quite competent. 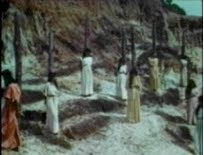 The various villains are suitably villainous. Hercules is played by Peter Lupus, under the name Rock Stevens. Lupus is apparently still working. He looks the part, being pure beefcake and mostly wearing very little clothing, and while his acting is pretty basic he’s by no means the worst actor to play this kind of role.

Of course any movie of this type must have a beautiful but evil queen who spends her time hatching diabolical plots and committing random assassinations. And Helga Liné fulfills this function admirably. She’s glamorous, sexy, depraved and murderous, and she has the right touch of exoticism. With a slightly more inspired script and given slightly more to do she could have been a classic screen villainous, and even as the film stands she’s fairly impressively wicked. 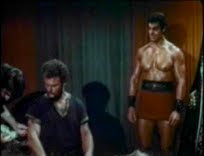 s, and the climax is reasonably impressive with considerable amounts of destructive mayhem.

The print I saw was a downloaded public domain print but the quality was rather better than is usual in such cases. Thee was a bit of print damage but overall it wasn’t too bad at all, and it appears from the running time to have been complete, or at least substantially complete. And the English dubbing isn’t as horrendous as it is in some 60s Italian gene movies. In fact it’s reasonably OK. Even the sound quality was acceptable.

This is certainly a movie for fans of this particular genre. If you’re not a fan of these movies this one won’t convert you, but if you are a fan there’s enough of the expected elements to provide an hour-and-a-half of decent entertainment.
Posted by dfordoom at 09:43

This one I thought was pretty decent. Helga Line plays a good lady in the last two TEN GLADIATORS movies and has quite a lot of screen time.

D, one of the best and biggest of these movies you should check out. GOLIATH & THE SINS OF BABYLON. Retromedia released a decent full wide DVD of it, only it's around 10 minutes shorter than the Italian version if I remember right. What's odd about the Italian disc is that while it look gorgeous, it's 2.35:1 for the credits then reverts to 1.85 after that. Very odd. Still, it's a great movie with a lot of everything the genre was known for. Another good 'Babylon' movie is the Gordon Scott film BEAST OF BABYLON AGAINST THE SON OF HERCULES aka HERO OF BABYLON.

Also, definitely get your hands on Bava's HERCULES IN THE HAUNTED WORLD. Fantomas released a gorgeous wide version of that on DVD.