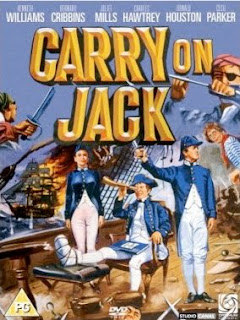 I have many cinematic guilty pleasures, not the least of which are the Carry On movies. Yes, they’re very silly and the humour is usually predictable, but that’s what makes them fun. Carry on Jack is one of the earlier entries in the cycle, and it has the Carry On crew all at sea as part of the British navy during the Napoleonic Wars.

Nelson may be dead, but the navy still has Captain Fearless (Kenneth Williams) in command of the frigate Venus. The ship is about to be joined by its newest midshipman, the unfortunately named Albert Poop-Decker (Bernard Cribbins), who has managed to spend eight-and-a-half years at the Naval Academy without actually graduating. But facing war with Spain as well as France the navy needs every man it can get, even including young Albert. Unfortunately on his last night ashore the hapless young officer finds himself in a brothel, in the company of a young lady named Sally (Juliet Mills).

Sally seems quite nice, almost the proverbial whore with the heart of gold, until she knocks poor Albert over the head and steals his uniform. Sally wants to go to sea as well. Or rather she wants to go to Spain, to find her lover. And she’s heard that the Venus has orders to p 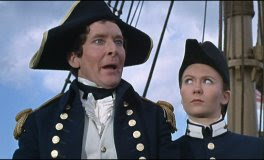 roceed to Spanish waters. Next morning Midshipman Poop-Decker, bereft of his uniform, stumbles downstairs to find himself nabbed by the press gang, along with a cess-pit cleaner named Walter Sweetley (Charles Hawtrey). Poor Poop-Decker now has to serve as an ordinary seaman.

Meanwhile Sally is passing herself off as the young midshipman. The fact that she is very obviously female is somehow not noticed, this being one of the conventions of this sort of comedy. And needless to say Captain Fearless turns out to be anything but fearless. There are encounters with pirates, with a Spanish invasion fleet, and much assorted nautical silliness. 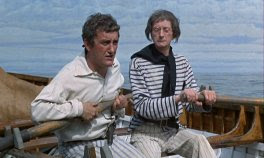 The Carry On style of humour is something you either like or you don’t like. If you do like it, this is a reasonable example of the breed. It’s one of the better Carry On films, but there’s still plenty of enjoyment to be had. Kenneth Williams is of course always a joy.

Perhaps the most surprising thing about the movie is that it’s not particularly sexist. Sally is probably the most competent of all the characters in the movie. That’s not to say that she really knows what she’s doing, but she at least has a rough idea which is more than can be said for any of the male characters.

The Region 4 DVD looks fairly OK but sadly it features no extras at all.
Posted by dfordoom at 08:31

I plan on checking the Carry On films eventually, already hooked on Hammer, might as well mix a little British comedy with it.