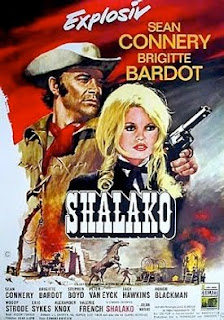 Shalako is a bit of an oddity. It has a spaghetti western look, but it’s actually a British/German a spaghetti western wannabe. With a rather odd cast for a western. You don’t really expect Sean Connery and Brigitte Bardot as the stars of a western. It’s also considerably more entertaining than its somewhat negative reputation would suggest.

A mixed group of European aristocrats has organised a lavish hunting party in the Wild West, apparently a few years after the end of the Civil War. They’re doing things in style. They’ve brought a butler with them, and an extensive collection of fine wines and gourmet foods. And just because they’re in the Wild West doesn’t mean they going to get up the habits of civilisation. They still dress for dinner.

Baron Frederick Von Hallstatt (Peter van Eyck) is the de facto leader of the expedition, but he’s hired some local guides and hunters. The party also includes the beautiful Countess Irina Lazaar (Brigitte Bardot) whom the Baron hopes to marry. There’s also a US senator and an impoverished English nobleman (Jack Hawkins) and his attractive but rather immoral wife (Honor Blackman).

Unfortunately their hunting party has strayed into Apache territory, in violation of a treaty made with the Apaches several years earlier. The Apaches don’t take kindly to this, and when the Countess and one of the hired cowboys find themselves isolated from the rest of the party they are attacked. The cowboy meets

a grisly death, but the Countess proves to be a much tougher customer. She’s a crack shot and manages to hold off her attacker until help arrives in the unexpected form of Shalako (Sean Connery). Shalako is actually a former colonel in the US Army who now lives a rather mysterious roving life. When lots more Apaches arrive on the scene Shalako and the Countess can no longer hold them off, but they make an agreement with the Indians. The hunting party will leave Apache territory by sunrise. The Countess gives her word.

But alas the rather arrogant collection of wealthy and aristocratic hunters don’t believe in backing down in the face of threats from mere “savages” and they’re not inclined to move on. Shalako realises it’s going to be a major fight with the Apaches, and dies his best to organise some kind of defence around the abandoned fort that the hunting party is using as a base.

It turns out that there’s plenty of shady dealing and double-crossing going on among both the hunters and their hired guns, and pretty soon the situation becomes desperate as Shalako is forced to lead the noble hunters and a few of the more faithful hired guns to safety on foot.

There’s plenty of action, and plenty of intrigue. I really don’t understand why this movie isn’t more highly thought of. It’s no masterpiece, but it’s entertaining and it looks good. The scenes of the noble sportsmen and women all dressed for dinner seated

around an elegant dining table and attended by a uniformed butler (played by Eric Sykes of all people) adds a definite surreal touch.

The acting from the exceptionally strong cast is generally extremely good. Jack Hawkins had lost his voice to cancer by this time and had to be dubbed by another actor but he still makes a fine blustering aristocrat Sir Charles Daggett. Honor Blackman has great fun as the wicked, lustful, completely untrustworthy Lady Julia Daggett. Peter van Eyck gives a nicely subtle performance as the Baron, a man who is going to have to learn some hard lessons that are going to knock a good deal of the arrogance out of him. He’s potentially a very unsympathetic character but van Eyck makes him human at least.

Sean Connery seems a bit out of place, and not entirely sure of himself. He’s competent but it’s not a role that suits him.

The movie really belongs to Brigitte Bardot. She has the advantage of playing the most interesting character in the movie, and her performance is typically eccentric but succeeds through sheer bravado and charisma. And she makes a surprisingly convincing gunfighter in the battle scenes.

There isn’t much real sexual chemistry generated between Connery and Bardot, and the movie may have disappointed audiences expecting something a good deal sexier. Oddly though the lack of sexual heat turns out to be an advantage, as the attraction between them is based more on a growing mutual respect than on lust.

They’re both in their own way outsiders. Shalako has turned his back on civilisation, while Countess Irina is unwilling to accept the role she’s expected to play as a woman and as a member of her class. While the Baron knows all the rules of honour, he sees honour as essentially a matter of following those rules. Irina recognises Shalako as a man whose understanding of honour is more like her own - it means you have to actually behave with honour. When she gave her word to the Apaches she had every intention of keeping it, and she has no difficulty understanding Shalako’s desire to honour the treaty with them. The other members of her party show a disturbing inclination to regard shooting Apaches as a particularly challenging sport. While she’s both willing and able to kill to defend herself she never loses sight of the fact that this is not sport, this is killing real people.

The DVD release is less than stellar, although at least it’s in the correct aspect ratio.

It’s an enjoyable movie in the spaghetti western style, obviously made on a reasonable budget and worth seeing for Peter van Eyck’s performance, and even more especially for Bardot’s strangely magnetic presence and unconventional but oddly effective acting.
Posted by dfordoom at 02:40

This one's on my to-do pile after I found it in a FYE bargain bin a month or so ago. I'm encouraged by your review to see it sooner rather than later. Edward Dmytryk has solid Western credentials in my book thanks to Warlock (1959), which I recommend to any fan of the genre. Bardot is also fun to watch in Louis Malle's quasi-Western comedy Viva Maria.

Samuel, Viva Maria is one of my favourites. I tend to enjoy Bardot in most things. She had an odd acting style but it worked for her. She's especially good in Don Juan, or if Don Juan Were a Woman. Her last major movie, and she has fun as a femme fatale.