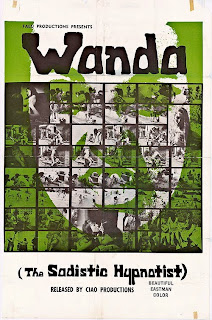 The best thing about buying DVDs from Something Weird Video is that you have absolutely no idea what to expect, except that they’ll certainly be weird. Most have more going for them just weirdness. Wanda, the Sadistic Hypnotist has only weirdness, but it has plenty of it.

This 1969 exploitation epic falls into three distinct sections, without anything distracting like plot coherence to get in the way. After a car crash a young man finds himself in the hands of Wanda and her crazed cult of sado-masochistic lesbians (yes, this is definitely a DVD from Something Weird Video). Poor Sylvester is cruelly brutalised by Wanda, who uses her strange hypnotic powers to keep control of both her gang and Sylvester. Wanda and her women amuse themselves by kidnapping Avon ladies and turning them on to dangerous pastimes like semi-naked go-go dancing.

Then the movie change 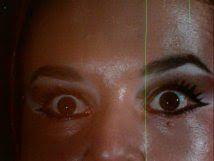 s gears for the first time as an escaped mental patient arrives. Wanda’s hypnotic powers fail her here, and the tables are turned. Now Wanda and her crew will taste the whip, literally.

Then we get another sudden shift as Sylvester and the escapee from the local asylum discover Wanda’s stash of LSD, which is conveniently kept in a bottle clearly marked LSD. Now the movie becomes a 60 acid-trip freakout movie, with lots of ultra-low budget psychedelic special effects. And lots of naked body painting. 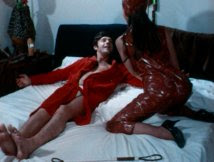 It’s all much too kitschy and deliberately silly to be offensive.

The acting is terrible, even by the standards of low-budget film-making. But then decent acting would have weakened the film’s appeal which is based entirely on kitsch. 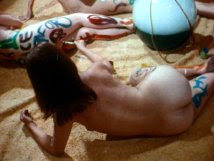 elia. It’s an extremely bad movie but it does have a kind of morbid fascination. And Wanda herself is memorable.

The second movie on the DVD is Ted V. Mikels' Dr Sex which I haven't had a chance to view yet. As usual with Something Weird the extras are bizarre but strangely addictive, comprising a number of completely off-the-wall 1960s nudie shorts.
Posted by dfordoom at 18:13