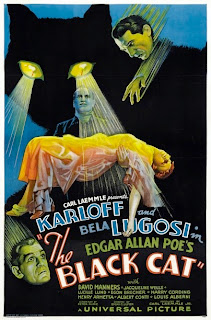 The Black Cat is one of the most highly regarded of Universal’s 1930s horror movies (there are many who rate it as the best of them) and it’s a movie that lives up to its reputation.

Director Edgar G. Ulmer didn’t know it then but this would be the first and last time in his career that he would have a generous budget and the resources of a major studio behind him. His affair with, and subsequent marriage to, the wife of Universal boss Carl Laemmle’s nephew would see him banished to the world of the Poverty Row studios. In fact he ended up at PRC, the absolute bottom of the rung. Ulmer later became the darling of the auteur theorists and his low-budget movies are today taken very seriously indeed.

The Black Cat was an idea that had been kicking around Universal for quite a while. Finally Ulmer and Peter Ruric came up with a screenplay that was deemed to be acceptable and the green light was given. The movie was released in mid-1934. It received venomous reviews from critics but the public didn’t care and they made it Universal’s biggest hit of 1934.

The budget was modest compared to some of Universal’s other early horror movies but Ulmer was always a fast and efficient worker and he got the maximum benefit out of the budget. 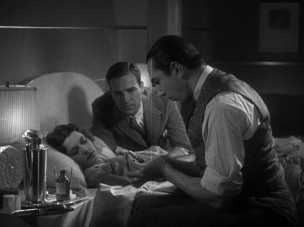 Edgar Allan Poe’s name was given prominence in the publicity for the film but the story as filmed has no connection with anything ever written by Poe (although it does capture some of Poe’s spirit).

A young American couple, Peter Alison (David Manners) and his new wife Joan (Julie Bishop), are travelling through central Europe on the Orient Express when they meet a distinguished Hungarian psychiatrist, Dr Vitus Werdegast (Bela Lugosi). Dr Werdegast is returning home after an absence of many years. During the First World War he had become a Russian prisoner after the Austro-Hungarian fortress of Marmorus had been betrayed to the enemy, a betrayal that cost the lives of thousands of men. Dr Werdegast believes that the man who sold out the fortress was his old friend Hjalmar Poelzig (Boris Karloff). He also blames Poelzig for the deaths of his wife and daughter. Dr Werdegast is returning to take his revenge. 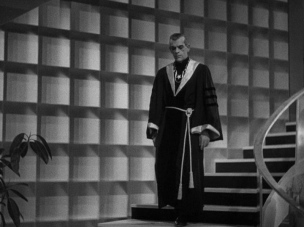 Poelzig is now a renowned architect. His ultra-modernist home was built on the ruins of the  Marmorus fortress. The charabanc in which Peter and Joan Alison and Dr Werdegast are travelling crashes on a mountain road in driving rain. The driver is killed but the passengers survive, although Joan is slightly injured. They make their way on foot to Hjalmar Poelzig’s house. Dr Werdegast and Poelzig will become involved in a dangerous game, with Joan as the stake.

That’s really all there is to the plot. This thin story was one of the faults for which the movie was lambasted at the time of its release but it proves to be an unimportant weakness. This is a movie that relies on atmosphere, stunning visuals and bravura acting and these elements are present in such quantity that no-one is likely to notice the threadbare nature of the script. 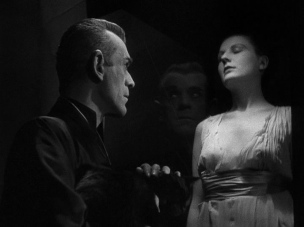 The Black Cat was the first movie to pair Universal’s two horror icons, Karloff and Lugosi. Karloff landed the more interesting and colourful role but Lugosi gives such a superb and subtle performance that he is no danger of being overwhelmed by Karloff. The performances of these two great stars complement each other perfectly. The other players are of no importance, and in fact it’s hard to think of a movie in which David Manners was important. Lucille Lund as Karen looks suitably mysterious while Julie Bishop (known at the time as Jacqueline Wells) manages to scream on cue.

Ulmer started his film career as an art director and it’s the brilliance and decadent extravagance of the visuals that makes this one of the great horror landmarks. This movie abandoned the gothic imagery of earlier Universal horror films. That decision turned out to be a masterstroke. The extreme modernist look of the house and of the interiors proves to be far more alienating, weird and threatening than tired gothic visual clichés. 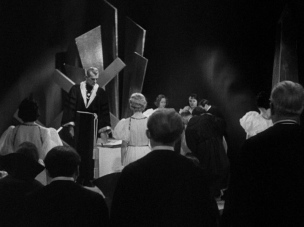 The striking images provide the perfect accompaniment to the outrageously decadent and bizarre themes with which the screenplay is packed. Pretty much every evil and every perversion and every form of madness that the screenwriters (and the audience) could imagine will be found here, from necrophilia to Satanism. Hjalmar Poelzig has a room in which he keeps his collection of perfectly preserved corpses, including that of Dr Werdegast’s wife. It’s a shocking idea made even more eerie by the visual presentation of it. This blending of bizarre ideas with bizarre images continues throughout the movie. Every other element of the movie, from the acting to the music, is exquisitely and artfully blended to absolute perfection.

This is one of the five movies in Universal’s Bela Lugosi Collection DVD boxed set. I’d seen this movie a few years ago in a terrible print on a budget DVD. The difference between that awful print and the excellent print included in this boxed set is striking to say the least.

The Black Cat is one of the masterpieces of the horror genre. A movie every horror fan must see.
Posted by dfordoom at 22:10

what a wonderful movie! I adore the poster and the visuals of the screenshots you posted. I'm a big Lugosi and especially Karloff fan -- I think I'll run out and buy the collection. Thanks!

To think....by the 60s, the only people who remembered this terrific film were FAMOUS MONSTER readers and the few who saw the "supernatural perhaps..." scene in the MONKEES film HEAD!!!!!