In 1935 Universal was in deep trouble and by the end of the year had changed hands. High hopes were held out for The Invisible Ray which would feature both of Universal’s top horror stars, Boris Karloff and Bela Lugosi. The picture was released in 1936 and was an interesting departure for the studio, being more science fiction than gothic horror. The result is a very entertaining movie.

Stuart Walker had been assigned to direct but when he asked for three more days to get the script into final shape he was dumped and replaced by Lambert Hillyer. The studio was worried that Walker would fall behind schedule and with the studio in big financial trouble they felt they could not take the risk. Ironically Hillyer ended up well over schedule and well over budget. 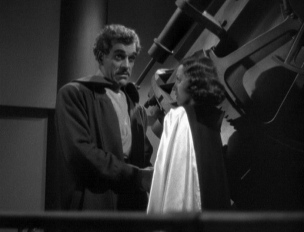 Karloff is Dr Janos Rukh and Dr Rukh is of course a mad scientist. He’s an astronomer who has made some extraordinary claims. Sir Francis Stevens and Rukh’s old rival Dr Felix Benet (Bela Lugosi) have been sent to Rukh’s observatory in the Carpathians to check out those claims. They are extremely sceptical but they soon discover that Rukh really is on to something.

At this point the movie gets into some wonderfully silly pseudoscientific territory. Dr Rukh has discovered an invisible ray (from the Andromeda galaxy) that enables him to not only see the past but project it onto a screen in his laboratory. At what the invisible ray discloses is a gigantic meteor hitting the Earth millions of years ago. The meteor came down in Africa and Dr Rukh is convinced it was composed of an element that can unleash even more power than radium. He calls this element Radium-X and sets off for Africa with his no longer sceptical scientific colleagues to find it. 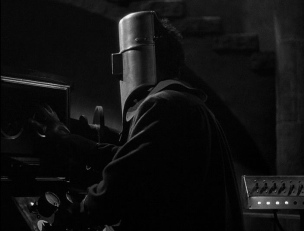 Dr Rukh finds Radium-X but pays a heavy price for his discovery. He is transformed into the dreaded Luminous Man (as the movie’s publicity described him). He glows in the dark and his touch means instant death. Luckily Dr Benet knows how to produce an antidote to Radium-X but he warns Dr Rukh that his brain may be affected. What really affects Dr Rukh’s brain is his later discovery that Dr Benet has achieved fame and wealth by using Radium-X in medicine (Dr Rukh is by this time incorrectly presumed to be dead). A showdown between the two scientists seems inevitable.

There is a romantic sub-plot involving Dr Rukh’s beautiful young wife Diane (Frances Drake) and a rather irritating young explorer.

It’s sad to see that by 1936 Universal had already lost faith in Lugosi. Karloff gets top billing and he gets the plum role of the mad scientist. He plays the role exceptionally well - he was always terrific as a villain who was as much a victim as a true villain. Lugosi gets the relatively thankless supporting role but turns in a fine and quite subtle performance. Whatever doubts Universal may have had of him Lugosi was always a fine actor when given the opportunity. Frances Drake makes a fairly glamorous heroine. 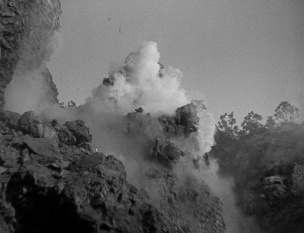 John Colton’s screenplay makes no sense at all but it has enough outrageous ideas to keep things consistently entertaining. Lambert Hillyer was not really a top-flight horror director but he was responsible for some good movies in the genre, including another notable 1936 Universal release, Dracula's Daughter.

Visually this movie is very strong. There are some well-crafted special effects (by John P. Fulton) and some nice gadgets. Dr Rukh’s observatory is an impressive set as his laboratory. The overall effect is a perfect blending of gothic and futuristic elements. The vision revealed by the invisible ray produces the right kind of science fictional awe. 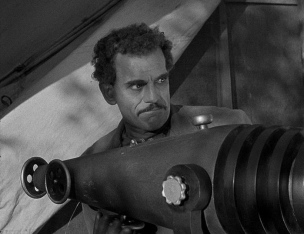 A very wise decision was made not to throw in large amounts of stock footage for the African scenes. Equally wisely the comic relief was kept to an absolute minimum.

This movie is one of five in Universal’s Bela Lugosi Collection DVD boxed set, a set that includes most of the memorable pairings of Lugosi and Boris Karloff (so perhaps it should have been called the Karloff-Lugosi Collection). Either way it’s a superb transfer.

The Invisible Ray is enormous fun and is highly recommended.
Posted by dfordoom at 18:55